Ashok Leyland formed a joint venture with Renault-Nissan to expand its roots and enter the hot area of light motor vehicles. The Dost – a capable LCV (Light Commercial Vehicle) and a sure-fire rival for the hugely popular Tata Ace – was first, followed by the Stile, an intercity van. After an unfavourable response in the passenger vehicle segment, Ashok Leyland decided to stick to what it is best at – commercial vehicles.

The Ashok Leyland Stile has just one diesel plant with a displacement of 1.5L and direct common rail injection. The 1461cc engine, which has four cylinders inline and four valves per cylinder and is equipped with a single overhead camshaft (SOHC), produces 74 horsepower and 185 Nm of peak torque at just 1750 rpm, with thrust reaching 2750 rpm.

Because the engine was engineered to improve fuel economy on the road, the performance is anything from quick. It comes with a manual transmission option. The Stile has a mileage of 20.07 kmpl depending on the version and fuel type you choose.

Owing to the robust multi-leaf system in the rear suspension, which employs parabolic leaf springs instead of elliptical ones, it gives a decent riding experience. Stile is ideal for rash cab drivers due to its general visibility, good torque delivery, and slightly snappy gear ratios.

The ride on the highways is smooth, although not comfortable. It absorbs irregularities well. The absence of basic safety items like airbags and an Anti-lock Brake System (ABS) in the options list is a major disappointment.

Being a veteran in the Indian Commercial Vehicle (CV) market, Ashok Leyland has been famous for its reliability and user-friendly yet rugged products. Since its inception, it has given tough competition to the Tata vehicle market by standing true to its aspirations.

Serving the purpose of a minivan as a hotel shuttle or a taxi, Ashok Leyland introduced this 7-seater van at an Auto Expo in 2012. Targeted for the Indian market, Stile was rebadged as Nissan NV200 for intercity travel in July 2013.

In May 2015, Ashok Leyland pulled the plug on the Stile due to poor sales owing to low demand. Stile was thereafter discontinued and did not return to the market with any new updates. The vehicle was a modified Evalia (Nissan counterpart), albeit with a new grille, headlamps, and badging.

The price range for the Ashok Leyland Stile started from 8.06 lakh to the top-end model, i.e., Stile LX, which scaled up to 9.86 Lakh. Initially, Ashok Leyland decided to introduce two engine types, i.e., CNG and Diesel, but the production saw the roll-out of only diesel engines. Except for seating capacity (wherein LE offered 8 seats, whereas the other two variants had a choice of 7 or 8 seats) and alloy wheels offered as an option with the LS and LX types, all three variants had the same engine displacement, horsepower, and features. Stile had introduced three variants, namely LE, LS, and LX. Stile is available in 5 colours, namely Passion Red, Imperial Black, Silky Silver, Sparkling White, and Moon Grey. Its main rivalries are GO Plus, Santro, and Altroz.

For the commercial and taxi industries, this is the ultimate people-mover. The Stile's monocoque chassis, which weighs around 2000 kilograms, gives it a significant advantage over its bulkier competitors and helps to compensate for its lack of horses.

2. Large door panels with a low step-in height make it easier to enter and exit the cabin.

3. A large glovebox and a gear stick situated on a dash free up a lot of passenger room.

4. The driver's seat has good padding and has before-and-after adjustability. The third row is one of the most spacious in its class, and it can be folded down to create ample cargo room.

5. The light steering, gearbox, and tight turning radius make driving effortless within the city. It has well-balanced road manners and dependable handling.

Lack of proper NVH insulation causes disturbances in the cabin due to engine clattering.

2. In congested parking spaces, its lack of parking aid, sheer size, and absence of a rear windshield wiper cause annoyance.

3. Because the Stile has 180mm of ground clearance and 1860mm of good height, it has some body roll, limiting its agility and high-speed mobility.

4. It is a little bothersome that basic features like vanity mirrors and passenger side window control are missing.

5. The clutch pedal is slightly offset to accommodate the steering column, which may be uncomfortable for some large-footed drivers.

6. It has only the most basic trim levels. Its cost-cutting engineering results in a laundry list of features that aren't present. 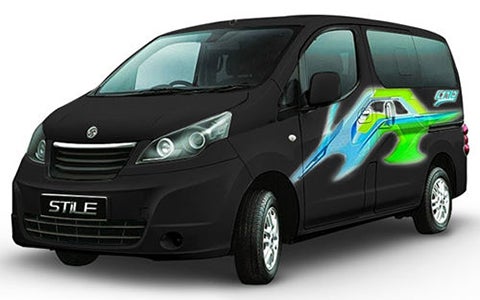 Stile exudes a sterile van-like demeanour with some modern and urban-friendly flourishes. The front appears well balanced and quite pleasant with a massive grille and smoked heavy headlights.

In many aspects, the Nissan Evalia is superior to the Ashok Leyland Stile because it is the older sister. It's slightly more attractive, well-built, and well-equipped. However, Stile's efficiency, value, and ownership cost are unbeatable. It has a practical and roomy interior, but it is lacking in terms of amenities and comfort.

Renault's engine is a tried-and-true mill that has won Formula 1 races. As a result, the Ashok Leyland Stile's stand-out points are durability and efficiency, the two essential demands of any high-running people-carrying MPV. Compared to other engines on the market, the 1466 cc engine is not very refined, but it excels in fuel consumption. With an ARAI-certified mileage of 20.07kmpl, the Ashok Leyland Stile is a customer's dream. Its main selling point is its practicality as a pocket-friendly people carrier with a reliable engine. Although there is nothing in the way of equipment, the airy and utilitarian interior is enough for transporting passengers in comfort.

Furthermore, rear AC vents are a welcome addition in a vehicle of this size. Ashok Leyland has carved out a unique niche by serving India's commercial industry for many years. The dynamic Indian market knows what to do, when to do it, and how to do it. As a result, their success in the LMV (Light Motor Vehicle) market is unavoidable. The Maruti Suzuki Ertiga is a better driver's car, the Mahindra Xylo is a more affordable and rugged option, and the Nissan Evalia is a more user-friendly vehicle. Yet, Ashok Leyland Stile is a real people carrier in every sense of the word.