Over the years since its production, it has been given four different upgrades to date. The DBS Superleggera Volante, launched in 2019, was given a convertible design and the option of eight colours. Later that year, Aston Martin launched the DBS Superleggera OHMSS to celebrate the 50th anniversary of its feature in the James Bond movie ‘On Her Majesty’s Secret Service’. It was given a unique olive green paint job. The DBS GT Zagato went on sale in October 2019 with a power upgrade from 715 hp to 760 hp. It only sold 19 units and was priced at £6 million. The 2020 007 Superleggera was launched with ceramic paint and a carbon fibre roof along with front splitter and spoiler.

The DBS Superleggera is powered by a 5204 cc engine, producing a massive power output of 715 bhp and an enormous 900 Nm of torque. It can cruise at speeds up to 400 km/hr.

It will be available in the Indian market as a petrol variant, with no diesel or electric options on offer.

It is fitted with a rear mid-mounted ZF eight-speed automatic transmission with paddle shifters. It also features a carbon fibre propeller shaft.

The current generation of Aston Martin DBS Superleggera is expected to be introduced this year to the Indian market. Launched internationally in 2018, the model was due to make its way to the Indian market in 2021, but the ongoing pandemic delayed plans. The 2022 Superleggera will be available as a soft-top convertible, similar to the DBS Volante 2007’s earlier version. It retains the design language of the DBS but gets major upgrades in terms of performance and exteriors. The colour specification is yet to be confirmed, but it is supposed to get a Pearl White paint job, apart from a few other colours. The new DBS Superleggera comes with higher top speed, quicker acceleration and a massively powerful engine block. It also gets hand-stitched leather seats, along with wooden fitting for the dashboard and carbon fibre inserts for the cabin. Aston Martin also gives customisable options for the Superleggera as per the customer’s needs.

It is supposed to be priced at a hefty Rs. 5.0 Crore (ex-showroom). It competes in the super Grand Tourer (GT) category alongside the likes of Lamborghini Aventador, Ferrari 812 and Lamborghini Huracan Evo.

The new DBS Superleggera produces more power than its predecessors and can accelerate to 100 km/hr in only 3.4 seconds. It also gets a higher top speed of 211 mi/hr or around 400 km/hr.

The interiors are plush fitted with handmade and quality materials like wooden dash fittings, leather and metallic buttons.

The DBS has improved steering with a good and weighty feel while driving the car. The handling has also improved due to using a responsive steering system.

It has a great sports car exhaust, and the sound is exciting when one revs the car at higher rpm. It aptly matches the car’s character.

The styling is more aggressive than its predecessor and gives it an appealing and distinctive presence.

The new cabin of the DBS comes with customisable options for the interior and exterior.

It is heavier than its rivals, weighing over 1.8 tons. The Lamborghini Huracan is comparatively lighter.

It is track-ready with a decidedly complicated driving requirement. Only experienced drivers can control the performance that it has to offer.

The back seats are pretty small and uncomfortable, and fitting an adult in the back is a tricky proposition.

The climate control is highly touch-sensitive and operates awkwardly on its own sometimes.

It has a stiff ride quality. Other models such as Bentley and Mercedes offer a more comfortable ride. 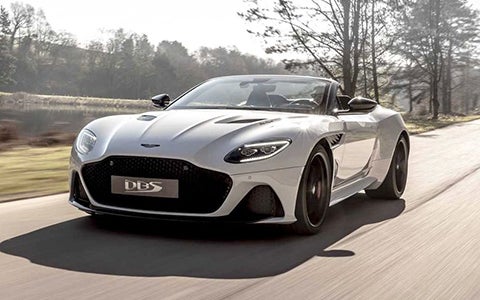 The Aston Martin Superleggera offers excellent performance and a thrilling driving experience vis-à-vis handling and power. It is a dedicated performance car that is counted among the fastest cars in the world. Even with such a high-end performance, it returns a good mileage and can be used for long-distance travel without much hassle. The car’s interior feels exceptionally elegant and well-built. The option to customise is another advantage. It has sufficient luggage space and can carry more items if the rear seats are used for carrying. Although it is a driving-focused car, it offers assistance features like parking sensors and parking camera, along with parking assist, heated and electrically adjustable seats, automatic climate controls and a good speaker system. Additionally, Aston Martin offers a three-year warranty on basic services and drivetrain repairs, along with a 10-year corrosion warranty. This is convenient for buyers because cars like this need dedicated service and repair, which is often not available in time in India. DBS Superleggera offers essential safety such as tire pressure monitoring, ABS/EBD braking and electronic stability control.

Some of its rivals have better weight features, like the Lamborghini, and are cheaper than the DBS Superleggera. Some even offer a better ride quality. But if a buyer is looking for a dedicated performance car that also offers a luxurious feel to the driving experience, the Superleggera provides them both.