Someone held the button on the extrusion machine for too long on a DB9. What's the end result? A stunning four-door, 5-metre long Aston Martin that, while adding a little useful space in the back, certainly lights up the open highways. The Aston Martin Rapide is a high-performance sports saloon that was initially revealed as a concept car at the 2006 North American International Auto Show, and the production version was shown at the 2009 Frankfurt Motor Show. The Rapide was first produced in 2010.

In late 2010 itself, Aston Martin was preparing to launch its automobiles in India, and had partnered with Infinity Cars to open its first dealership in Mumbai. The Rapide was among the four models to be sold in India. However, the big complaint was that it wasn’t quick enough for its price. It was powered by a 470 horsepower 6.0 litre V12, but 5.0-second zero-to-100 kmph wasn't earth shattering by modern standards.

Therefore later, in late 2013, Aston Martin introduced the new Rapide S. However, it wasn't cheap by any standards as it came with a sticker price of Rs 4.4 crore (Ex-Showroom)). The big change for the S model was that it was powered by an updated 552 bhp and 630 Nm, 6.0-litre V12 engine.

Aston Martin launched the Rapide in India in 2016, with a price tag of Rs 3.29 crore (ex-showroom). The 2016 Rapide received a new front end, a revamped engine, a strengthened body, a redesigned chassis, and a new cabin.

The Rapide is offered only in petrol fuel types.

The engine on the Rapide comes with an 8-speed automatic gearbox.

The Aston Martin Rapide is among the British sports car maker's successful experiments. With a beautiful V12 under the hood, it is huge on the outside but confined on the inside. It provides a terrific overall experience that none of its competitors can match. However, it has become obsolete and Aston Martin is ambitious to resurrect it as an electric vehicle.

The road-spec version of Aston Martin's first all-electric production car, the Rapide E, was unveiled globally in 2019. It was created in partnership with Williams Advanced Engineering (WAE) and will be exclusive to only 155 units. The Rapide E is equipped with an 800V battery pack that is good for churning 600bhp of max power and 950Nm of peak torque. The Porsche Taycan and the Tesla Model S are competitors for the Rapide E.

The wide side air intakes that stretch all the way up to the front door, long bonnet, 20-inch wheels, and the low-slung roofline, all contribute to the traditional GT car vibe. On the road, the Rapide's attractive style attracts a lot of attention.

The V12 engine from Aston is one of its kind.

The exhaust note is truly intoxicating.

Because the ride isn't overly harsh and the suspension smooths out most road bumps, the Rapide may be leveraged as a daily driver. Its underbelly is also not scraped because of its 170mm ground clearance.

Handling is precise and well balanced. This four door sports sedan inspires a lot of confidence while attacking corners.

Boasts a sense of exclusivity on the road.

Second row seats are quite cramped and best for only kids.

Some of the cabin ergonomics are a bit flawed.

As far as acceleration figures goes, the Rapide isn't the fastest sports car that you can get for that deal of money.

As a whole package, the Aston Martin Rapide feels very expensive. Better and modern options are available at the same price bracket. 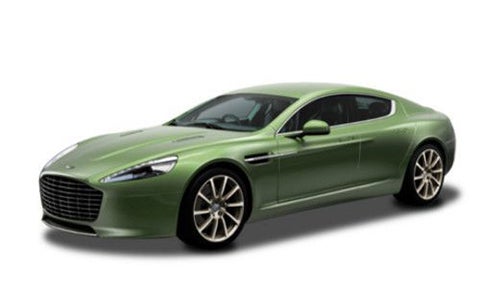 The Aston Martin Rapide would be the car James Bond would drive if he had a family. While other four-doors are calm and collected, the seductive Rapide is in a league of its own. In fact, the Rapide's snout resembles that of a shark poised to attack its prey when viewed from the side. Fortunately, Aston Martin hasn't sacrificed internal space to achieve those athletic proportions. Despite the low roofline, there's plenty of head and leg room up front. The front chairs are also very comfy, with adequate thigh support. The back seat is a little cramped, but it'll still fit the junior Bonds. But most importantly, the Rapide is not different to other Astons. Therefore, despite being a practical four door, the Rapide is no less fun. Also, though there is a 12-speaker Bang & Olufsen audio system, you would most probably prefer hearing to that melodious V12 engine.

To have some family fun, you may put the car in Sport mode, step on the pedal, and see the kids' faces light up as they are pushed back into their seats by the Aston's exhilarating acceleration. The 6.0 litre V12 engine used by Aston Martin is one of the largest on the market among the last remaining models against an array of turbocharged sports cars. Although the V12's best work is done higher up in the rpm range, given the massive amount of torque it produces, it pulls admirably from low down in most gears. You'll find it difficult to believe that something as enormous and hefty as the Rapide can accelerate along the tarmac with such immediate intensity if you push it hard. The Rapide is designed to be a daily driver, so the ride isn't harsh and the suspension smooths out the majority of road disturbances. Its underbelly is also not scraped because of its 170mm ground clearance.

As a result, the Rapide is the perfect Aston Martin for the family. When it comes to grand cruising in luxury and with a dash of practicality, it checks all the criteria. Not to mention that it offers unrivalled style and possibly a little more distinction than its mainland European competitors.