Aston Martin is a well-known British high-performance carmaker that needs little introduction. For several decades, the company has been producing top-class vehicles, and each year it surprises its admirers with something new and exciting. The Aston Martin Vanquish is one of its iconic products. It's a grand tourer that debuted in 2001 as the Aston Martin Vantage's successor (1993).

From 2001 through 2007, the first-generation "V12 Vanquish," created by Ian Callum and introduced at the 2001 Geneva Motor Show, served as the marque's flagship. The V12 Vanquish was based on the "project vantage" concept car and included carbon fibre and alloy structure, a slew of new technologies and powerful V12 engine and James Bond drove a specially customised V12 Vanquish in the 2002 film Die Another Day. After 2007, the V12 Vanquish was replaced by the DBS.

India got the taste of the Vanquish after its second-generation model was launched in 2012. The launch of the Vanquish in India was an attempt by Aston Martin to expand its India portfolio, which included the Rapide, the DB9, the DBS, and the ultra-exclusive One-77. The Vanquish was priced at Rs 3.85 crore (ex-showroom) and was the second most expensive Aston Martin behind only the One-77.

The Vanquish was built on the latest generation of the VH platform, and thanks to its monstrous V12 engine, it was capable of reaching 100kph in 4.1 seconds.

The Vanquish is offered only in petrol fuel type.

The engine on the Vanquish comes mated to an 8-speed automatic gearbox.

The Aston Martin Vanquish was a high-performance GT car. It was introduced in India in 2012 at a price tag of Rs 3.85 crore. Powering the Vanquish was an insane 565 bhp 6.0 liter V12. Altogether, the Vanquish was a good and major step forward, but it remained an imperfect package that depended more on charm than ability. It was phased out in 2019.

The Aston Martin Vanquish is offered only in a single fully loaded variant: V12.

The Aston Martin Vanquish is available at a price of Rs 3.85 cr (ex-showroom).

In the Indian market, the Aston Martin Vanquish competes with cars such as the Bentley Continental GT, Ferrari F12, and the Lamborghini Aventador.

The wide side air intakes that stretch all the way up to the front door, long bonnet, and the low-slung roofline all contribute to the traditional GT car vibe. On the road, Vanquish's attractive style attracts a lot of attention.

The glorious V12 engine from Aston is one of its kind.

The exhaust note is truly intoxicating.

Thanks to the sweet old-school hydraulic steering wheel, it's dead easy to dart the Vanquish in a corner (vs. a newer electronic assisted steering wheel with less sensitivity).

The Vanquish absorbs the most road disturbances astonishingly well when the adaptive dampers are placed in a softened setting. The Vanquish can be used as a true GT supercar. It may also be leveraged as a daily driver.

It boasts a sense of exclusivity on the road.

It has limited boot space.

Some of the cabin ergonomics are a bit flawed.

As far as acceleration figures go, the Vanquish isn't the fastest sports car that you can get for that deal of money. The F12 and the Aventador feel faster and more intimidating.

The vehicle doesn't feel very nimble despite its body being composed of carbon fibre, making it lighter on its feet than the Continental. It is still a hefty vehicle. Even in its stiffest setting, the Vanquish feels a little floaty on undulating roads, especially when compared to the sharp and aggressive F12.

The infotainment system is terrible.

As a whole package, the Aston Martin Vanquish feels very expensive. Better and modern options are available at the same price bracket. 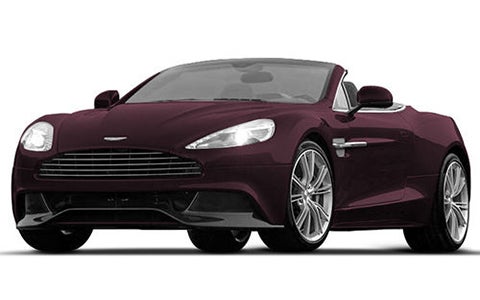 The Aston Martin Vanquish stands out as a dinosaur in an age of smaller turbocharged motors and smart FWD systems. With their front-mounted 6.0-litre V12 powering the rear wheels, the Vanquish models evoke old-school grand tourers rather than the current crop of cutting-edge sports cars. Its sensual GT style makes it stand out on the outside as well. On the inside, the Vanquish two-seat cabin is a great mix of vintage workmanship and current technology, while practicality suffers a little. The cabin is made entirely of the finest materials and is meticulously built when it comes to quality. However, while the Aston Martin Vanquish boasts a magnificent appearance and powerful engine, its competitors have significantly advanced the game.

The Vanquish V12 produces a whopping 565 horsepower. That's good for a claimed 0-60 kmph time of 4.1 seconds, but it is still quite docile and pulls easily from low rpm while strolling around town. With your foot firmly planted on the floor, though, it gets a ferocious, tougher edge with enormous acceleration and a homicidal exhaust scream. Having said that, the Vanquish, like the Bentley Continental Supersports, is far less terrifying than the frantic Ferrari F12. This also applies to the handling. It lacks Bentley's surefooted four-wheel-drive traction when exiting tight corners, and it's not as quick or demanding as the sharper and quicker F12. Depending on your point of view, this could be both beneficial and poor. One of Vanquish's best features is its steering. The Vanquish's level of comfort adds to the impression that the Vanquish is more of a GT than a pure sports car.

As a result, the Vanquish is the perfect Aston Martin for people looking to cover distances quickly, comfortably, and more specifically in style. So, it checks all the criteria when it comes to grand cruising in luxury and with a dash of practicality. And properly fun when you need it. Not to mention that it offers unrivalled style and possibly a little more distinction than its mainland European competitors.