The Aston Martin’s Virage was a product of British luxury automobiles, and it was a replacement of all the V8 models. It was first introduced at the Birmingham Motor Show in the year 1998.

John Heffernan and Ken Greenley designed the beautiful and luxurious Virage, and it was very much praised for its fresh and elegant contemporary style.

A strong and sturdy Virage replaced the V8 lineage.

The Virage is positioned above a six-cylinder Aston Martin DB7, and its succeeding variants are collectable nowadays as it was extremely rare during1989 to 2000.

The Virage had many variants ranging from 1992 to 2012 and each had its specifications.

It had a body type of convertible and coupe and had slots between DB9 and DBS.

This car had four seats and a standard 6 litre V-12 with a six-speed automatic.

The Virage is a petrol-based model with an ARAI mileage of 8 km and 5935 cc.

It gives a maximum torque of 570 nm gives a speed of 186 mph. It has a rear-wheel drive with 6- speed automatic gearbox with a manual mode for shifting the gears and has a fuel tank capacity of 78.

The Virage model’s front grille was inspired by the One-77 model, and the bodywork was shaped in a unique way to fit the GT market, and it looked very much appropriate in the company of Ferrari.

One of the more different models from the house of Aston Martin is the Virage. A new generation of Virage was introduced during the Geneva Motor Show held in 2011 by Aston Martin. This automobile capitalised on the DBS Technology. It was announced that Virage would be discontinued after its production of 18 months as the distinctions between DB9 and DBS were too slim. The Virage is a 2-seater with an AM11 V12 engine with a power output of 497PS and a 570 N-m torque. It was available in two styles: Coupe and Volante, convertible.

It has power steering with power windows front and an anti-lock braking system. The Virage has Automatic Climate control with alloy wheels. It has a central locking with door ajar warning with xenon headlamps. It has the feature of monitoring vehicle stability control systems and has a crash sensor. And other than these, it has a radio, integrated 2DIN Audio with USB and auxiliary input, and Bluetooth connectivity. The Aston Martin Virage is not available in many colours, and it has a price range starting from 2.4 crores. But Aston Martin discontinued Virage in 2011 itself, and the car has been out of production. Aston Martin's Virage has been a tough competition to Hyundai Elantra, Lexus LS, and Mercedes-Benz.

The Virage is easy to drive, luxurious, and very well balanced.

This car is not as aggressive as DBS nor as soft as DB9, but it is balanced between both and gives the driver the satisfaction to drive.

This car has improved sat-nav and has a sensational appearance.

It is one of the best long-distance cruisers and is hugely comfortable.

The interior of this car is very curvaceous and has a muscular dashboard. It has an aluminium speedometer and key-cum-starter button made up of crystal.

You can throw this car into a sport mode and can activate the harder suspension by just pressing some dedicated buttons on the dashboard, and then the car will tackle the twisty roads.

The interior of this car has hand-stitched leather joints and is a perfect example of why it is not just a badge that you will be purchasing.

The later versions of this car took a bump of displacement, and it didn't have much storage space.

The services of Virage cost more than any BMW or Ferrari.

It does not have great visibility for the back of the car.

The prices of the variants of Virage kept increasing, and it would cost a fortune to buy one of these models.

When you drive this car hard, it becomes a trouble to drive, and anyone would prefer to walk at that point.

The car’s motor low-end grunt could have been better, and the same with the infotainment screens. 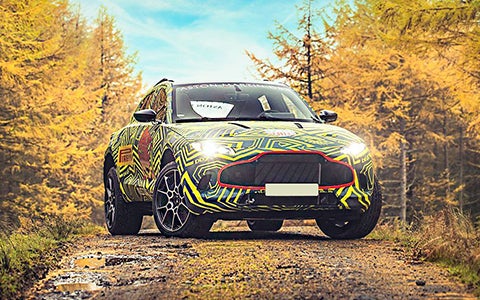 Based on the Lagonda chassis, the Virage car model is 306 mm shorter than the luxury sedan. In contrast, the rear disc brakes were relocated outboard to the wheels for easier servicing. However, Ford had taken control of Aston Martin just a year before the huge reveal of Virage and had reduced the development and production costs. The final evolution of Aston Martin’s Virage series honours the maker's 1959 victory at the 24 Hours of Le Mans.

The virage was intended to sit in the narrow slot between the basic DB9, and the flagship DBS and it was also announced that the second generation was going to be discontinued after its production of 18 months.

The Aston Virage, for now, is not so up-to-date a GT car that one can buy, but with proper maintenance, it can be used, and it will cost you every penny, but the car will not let you down. Sometimes you might feel the Aston Martin Virage is unreliable because the mainstream models are hand-built, but it also means that the quality and uniqueness of this car are unbeatable.

The Aston Martin Virage users have never had any complaints, there have been fewer with the electronics, but overall all of its owners are pretty happy. As an owner of a car would say, ”you need the love to drive a car and to find what is wrong with their car.”