The A7 was launched initially in 2010 as a four-door fastback sedan. It was based on the Volkswagen MLB platform. This first-generation model continued until 2018, when it received a facelift, i.e., the Sportback version was added to the model. The model launched in India in 2011 follows the Sportback concept and has facelift features and upgrades.

The variants were paired to the powertrain using a 7-speed S Tronic, dual-clutch automatic gearbox. This gave the petrol variant the top speed of 250 km/h while the diesel engine mashed out at 155 km/h.

The A7 was launched with the option of a plug-in hybrid in the Geneva Motorshow, but it did not make it to the Indian market. The Sportback edition was the most loved because of the aesthetic upgrade and style treatment.

The Sportback variant was launched to the TFSi and the TDI. Audi brought about this concept of making the A-class sedan more performance-oriented.

The A7 was discontinued in 2015 in India and was replaced by the sportier variant from the RS line-up, the Audi RS7.

The A7 launched in 2011 was the first-generation model in the line-up of A-class sedans produced by the company. This model was in production from 2011 to 2015, with facelift upgrades and minor changes to the exterior and interiors. In the Indian market, it was available as four variant options, a Sportback, 3.0 TDI Quattro, a 3.0 TFSi, and a Black Edition. The Sportback, 3.0 TDI Quattro, and the Black Edition were available as a diesel variant, while the 3.0 TFSi was a petrol option. All the models were available with an automatic gearbox. The Audi A7 [2011-2015] Sportback cost started from Rs. 90.60 Lakhs, while the 3.0 TFSi started from around Rs. 67.05 Lakhs. The Black Edition and the 3.0 TDI cost Rs. 88.46 Lakhs.

The design feature of the Sportback was the most distinctive characteristic of the model. The sloping roofline and the hatchback design gave it an aggressive composure. Other variants offered a variety of 11 colours to choose from, a premium dash and cabin, a powerful engine, and competitive pricing. The A7 competes with Mercedes-Benz C Class, BMW 3 Series, Škoda Octavia in the mid-range luxury sedan segment. The feature-loaded A7 was one of the most sought-after luxuries among all its competitors due to its styling and performance figures. It was also well-equipped with a good amount of technology for driving aid, safety, and convenience.

The interior of the A7 has a luxurious feel with wooden inserts on the dashboard, metallic pieces for the air vents, a digital cluster gauge, and feature-loaded infotainment with navigation as well as cruise control.

The powerful petrol engine was fast and punchy, while the diesel engine provided a good amount of torque. Both the engines performed well in any circumstance.

The diesel variant was the more efficient choice among the two fuel options available. It put out a tried and tested mileage of 14.4 km per litre. The fuel capacity of 65 litres yielded a fantastic mileage of 936 km, which was great for long-range driving.

The Sportback was beautifully crafted to look stylish as well as sophisticated. This made the A7 distinguishable from its rivals like the BMW 3 Series, which had a regular sedan-type design language.

The Quattro all-wheel drive is among some of the best AWD systems available in the market. It can easily handle challenging road conditions and performs adequately when required.

The design did come with some drawbacks as the rear seats were uncomfortable, and the passenger row was cramped in terms of headspace and legroom.

The 20-inch wheel also posed a problem as the car jolted around bumps and over potholes due to the big size of the tires.

The plug-in hybrid would have been a great option if it were available in the Indian market; therefore, its unavailability limited the choice of fuel type. 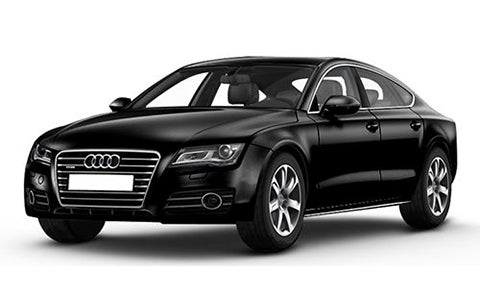 The A7 has been reviewed as a practical car by many experts, and it does perform that way when it comes to everyday usability. The fuel efficiency of the diesel variant is one of the best features of the A7. It also provides a good amount of safety aid with respect to driver’s assistance such as traction control, front and rear parking sensors with camera, crash sensor, and tire pressure monitor. These add to the convenience of driving and decrease the unnecessary hassle. Safety is paramount for any car that has a high-performance engine, and so is the case with the A7 as it is fitted with equipment such as front and rear side airbags, side-impact beams, central locking along with child locks. Features like ABS, braking assist, and anti-theft alarm come standard with all the variants. Buyers and experts have also admired the styling of the A7, which blends modern design with sharp and simplistic contours on the exteriors of the car. The interiors are lavish as well, with well-crafted seats, a finely put dashboard, and the space in the cabin for small items. It is a good choice for buyers who want to invest in a daily use, practical car that can also perform when needed. When compared to its rivals, it did come at a higher price point than the Škoda Octavia, Toyota Camry, BMW 3 Series, but it did provide for all the amenities and even more, particularly in terms of styling and performance. The performance upgrades add the very much desired sports car-like performance but retain the composed caricature and poise of the car.