Best expressways in India - The runways of joy! - All About Buying & Selling of Used Cars, New Car Launches

Best expressways in India – The runways of joy! Roads are the arteries of the country. They drive the momentum across the region to bring accessibility of products and make commute possible between cities. Like world over, development of roads has been a congratulatory sign of success within the nation. India has been on a spree of coming up with new expressways and controlled access roads to decongest the city arteries and bring easier connectivity to the inhabitants. These expressways in India are shaping the new infrastructural stance of the country. Almost all of us can relate to the feeling of cruising along a well-laid road zipping through meadows and scenic adventures. From the adrenaline, addictive mountainous expressways to roads passing through the desert, each one of them tell their own story.

Here are some of the best expressways in India which can make all your road tripping scenes a reality: There is always something beautiful about roads which take you out of the city’s hustle and bustle and drop you in solitude. The Himalayan Expressway is a 27.5Km access controlled highway connecting Zirakpur in Punjab to Parwanoo in Himachal Pradesh. The expressway passes through three Indian states namely Punjab, Haryana and Himachal Pradesh. This expressway was laid by the J.P group. The Himalayan Expressway was constructed with a total cost of 412 crores and consist of two flyovers and 11 bridges. Things to look forward to while on Himalayan Expressway:

The Mumbai-Pune Express connects the financial capital of India with the education capital of the nation. Known for being the first ever six-lane concrete, high-speed, access controlled tolled expressway in India, the Mumbai -Pune Expressway is 94.5Km long. The Mumbai-Pune expressway was open to the public in the year 2002 and have been one of the busiest expressways in India till date. This three-lane expressway boosts the connectivity between two major cities of Maharashtra and makes it possible to commute between cities within 2 hours. The expressway starts from Kalamboli at its west end and finishes at Dehu Road on the east end. This expressway was constructed by the state government of Maharashtra and is maintained by the same authority. Things to look forward to while on Mumbai-Pune Expressway: Things to look forward to while on Vadodara-Ahmedabad Expressway: 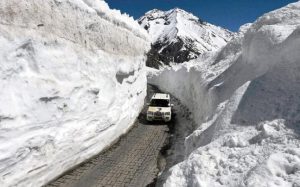 Things to look forward to while on Leh-Manali Highway:

One Reply to “Best expressways in India – The runways of joy!”