Brezza vs Duster: The People's Choice vs the Pioneer of the Compact SUV Segment 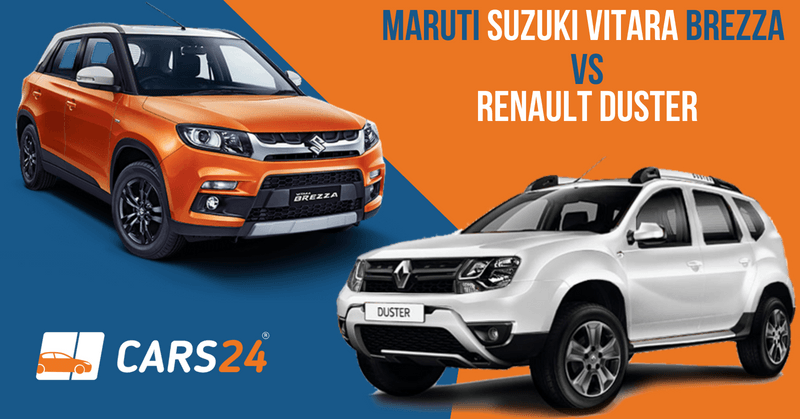 Off late, the Compact SUV segment in India has gained a tonne of momentum. It was a non-existent category a few years ago but currently, almost all manufacturers present here are fighting for a piece of the action. Today we will be pitching against each other, the car that pioneered this segment in the country, the Renault Duster and the car that popularized the segment, the Maruti Suzuki Vitara Brezza. So let’s compare both cars and find out who emerges victorious in our Brezza vs Duster face-off.

For round 1, we start off with the dimensions comparison as usual. Just one read through the spec sheet and it won’t be difficult to conclude that the Duster is the clear winner here. The Duster has more headroom, more seating width and a much roomier cabin overall than the Brezza. The only aspect where the Brezza wins is the weight. Even there the manual petrol Duster is 5 kilos lighter. The top model diesel stands at 1421 kilos due to the presence of a CVT gearbox. The AMT automatic is comparatively much lighter. Moving on to the performance, the problem here is that the Brezza is still devoid of a petrol variant! It’s only available in a Diesel option. In comparison, the Duster comes with a petrol option and two diesel variants, each with different specifications. We can’t compare the Petrol Duster to a Diesel Brezza so the Duster gets an upper hand straight away for having more engine configuration options. Even the diesel variant has two engine options which are sure to cater to a much wider audience based on specific preferences.

Now we’ll take a look at the 85 bhp diesel version of the Duster. As obvious as it is, this variant puts out 85 bhp of power and 200 Nm of torque. In comparison, the Brezza’s only DDis 200 engine puts out slightly more power and exactly the same amount of torque. The only gripe is that the diesel Duster is nearly 1300 kilograms in weight which is around 100 more than the Brezza. So compared to the 85 bhp Duster, the Brezza is the more superior car considering the performance. Now moving on to the more powerful Duster, it makes 110 bhp of power and 245 Nm of torque. Again there is a weight difference of around 100 kilos between both. But at the same time, the Duster makes roughly 24% more power and 23% more torque than the Brezza. With a difference that big, even the excess weight isn’t quite enough to bog down the Duster. In the 0-100 times, the 110 Duster is almost a second and a half faster than the Brezza.

Both cars get automatic variants too. The Brezza comes with a 5-speed AMT option for every variant except the base LDi option. In the case of the Duster, there are two automatic options but only on the respective top models of each fuel variant. The petrol version comes with a CVT transmission while the diesel version comes with an AMT gearbox. The Duster also benefits from the option of All Wheel Drive on the 110 bhp diesel model which the Brezza does not get at all. The Brezza is actually very pleasing to look at from the exterior. Despite the compact dimensions, it has a decent amount of street presence. From the rear, it is a little plain but the front section with the projector headlamp setup and the subtle chrome accents make it a good looker indeed! The front side quarter would be the best angle to look at it. The Dual tone roof also adds a lot of aesthetic appeal. Although it is only available on certain colour schemes and costs extra. From the aesthetics point of view, the Duster looks acceptably good. You’d expect it to look inferior to the Brezza’s due to the lack of DRL’s and projectors but Renault has inculcated enough styling elements to give the Duster a commanding poise. The roof rails and split bumper construction give it a tinge of ruggedness in appearance. Moving to the inside, it’s a mixed bag. Some elements are well thought-out, the others are just outright cheap and ooze cost-cutting. In contrast to the Brezza’s interiors which have a very good all-round appeal, the Duster’s interiors are all in ups and downs and are only about average overall. But with the comprehensive safety net, it takes the cake in terms of equipment without contest.