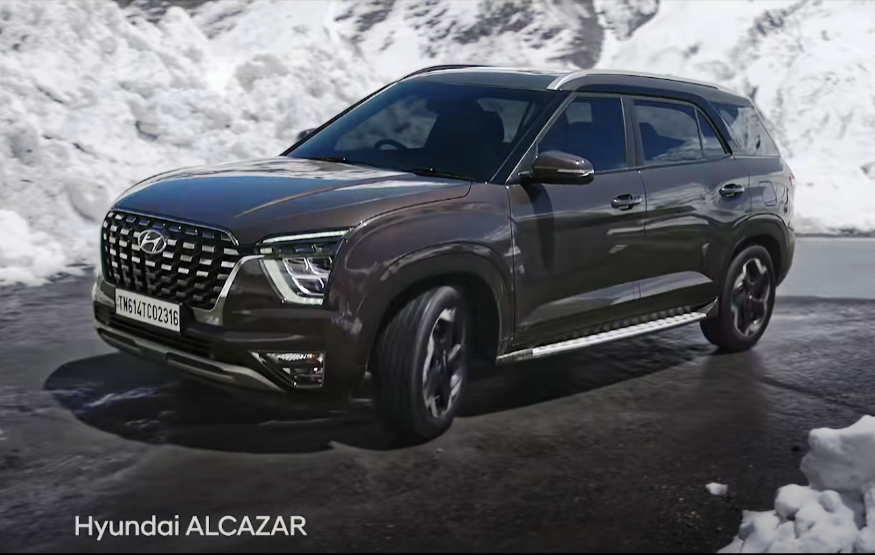 Just a couple of days back, Hyundai revealed details of the upcoming Alcazar SUV via photos and video clips. It had also begun accepting bookings from customers for Rs 25,000. Now, the Korean auto major has announced that it is planning on launching the Alcazar in India on June 18. Available in both 6-seater and 7-seater variants, the Hyundai Alcazar offers a segment-leading 2,760mm wheelbase for maximum roominess in the cabin. And even though it is based on the smaller Creta, this three-row family SUV sports a revised exterior design.

Upon launch, the Hyundai Alcazar will compete with the likes of the MG Hector Plus, Tata Safari, and Mahindra XUV500. As for the exterior styling, the Alcazar features a large ‘cascading’ front grille that now sports a fancy studded pattern. This makes it stand out as a more premium SUV in the Hyundai lineup, while the split LED headlamps are similar to the Creta’s, but they look larger. The most noteworthy design difference along the sides comes from the new dual-tone alloy wheels and the extended portion behind the C-pillar.

The rear of the Alcazar looks completely different (and less extroverted) than the Creta. Even the mock diffuser/skid plate is of a new design, plus there are twin tailpipes as well. Meanwhile, a thick chrome bar connects the tail lamps, the latter are of a different design too. In fact, where the Creta gets vertically-oriented rear lights, the Alcazar’s units are larger and horizontally laid out. These tail lamps not only make the Alcazar seem wider, but they also are easier on one’s eyes.

The dual-tone interior of the Hyundai Alcazar looks decidedly premium and gets features that will keep many buyers happy. Some of the niceties that you would like to keep an eye on include the 8-speaker Bose premium sound system, 64-color ambient lighting, built-in air purifier, a voice-operated panoramic sunroof, a 10.25-inch digital gauge cluster, rear picnic tables with built-in cupholders, a wireless phone charger, surround-view cameras, and a 10.25-inch touchscreen head unit with Apple CarPlay & Android Auto. Meanwhile, the Alcazar’s safety net should encompass multiple airbags, ABS with EBD, Vehicle Stability Management, Electronic Stability Control, Hill Assist Control, and ISOFIX anchorages.

The Hyundai Alcazar’s powertrain includes a 2.0-liter petrol or a 1.5-liter diesel engine, along with either a 6-speed manual or 6-speed automatic gearbox. Hyundai claims that the 157hp four-cylinder petrol engine with the 6-speed stick shifter is capable of pushing the Alcazar to 100 kmph in 9.5 seconds. For a large-ish SUV such as this, that level of acceleration is actually quite decent. As for the oil burner, it puts out 113hp and 250Nm of torque. And just like the Creta, the Hyundai Alcazar will only be available with front-wheel drive.