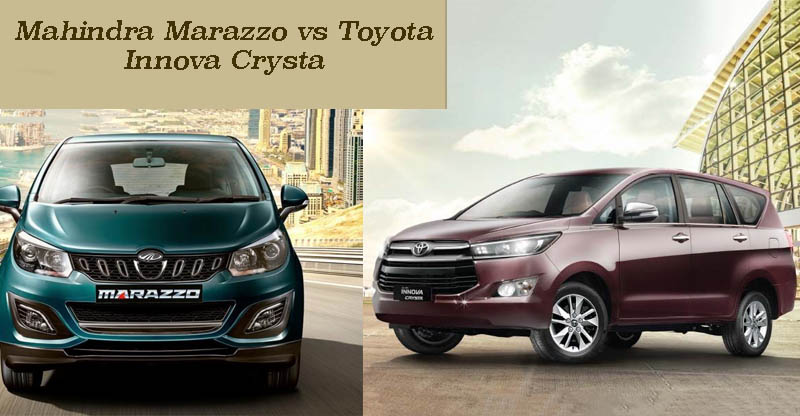 Mahindra and Mahindra, the UV giant of the Indian car market, recently launched the much-awaited Marazzo MPV in India. The Mahindra Marazzo has a lot of firsts to its credit. It’s the first product to be developed in cooperation between Mahindra Research Valley in Chennai and Mahindra North American Technical Centre (MNATC) in the USA. This is not all as it’s also the first jointly designed product by renowned Italian design house Pininfarina and the Mahindra Design Centre in Kandivali, Mumbai. The Marazzo is also being claimed to be the first-ever passenger vehicle in the world to have a transversely mounted engine with FWD layout on a ladder-on-frame chassis. Mahindra has patented this architecture as the ‘Best of both worlds’. But is the new Mahindra MPV better than the legendary Toyota Innova Crysta? We try to find it out in our Mahindra Marazzo vs Toyota Innova Crysta comparison –

The Toyota Innova Crysta ends up looking a lot costlier than the Marazzo. It’s not exactly Toyota’s fault though. Mahindra has priced its latest MPV very aggressively. With a starting price of Rs 9.99 lakh, it ends up being terrific value for money. The 8-seater variant of the entry-level Mahindra Marazzo M2 costs only Rs 5,000 more. While these are introductory prices, the Marazzo will remain much cheaper than the Crysta even after the announcement of the regular prices.

The cheapest variant of the Toyota Innova Crysta costs a lot more at Rs 14.34 lakh. The difference in the cost gets wider if you look at the top options. The top-end variant of the Marazzo, M8, costs Rs 13.95 lakh with an eight-seater layout. In comparison, the ZX trim of the 2.4-litre diesel engine variant of the Crysta costs Rs 19.70 lakh. The fully loaded version, which comes with a 2.8-litre diesel engine and an automatic transmission, costs a whopping Rs 22.70 lakh. That said, we don’t think it’s a good idea to compare the Marazzo with the fully-loaded Crysta 2.8 AT as the former doesn’t have an automatic transmission.

But a quick look at the price lists of the two models is enough to figure out that the Marazzo has a considerable price advantage over the Innova. Yes, the latter offers more in terms of the premiumness and brand image but the price gap is just too big to ignore. With this, the new MPV from Mahindra becomes the winner of the first round of this Mahindra Marazzo vs Toyota Innova Crysta comparison.

Also Read – Why Does Toyota Innova Crysta have a High Resale? – We Explain!

On the other hand, the Mahindra Marazzo is powered by a 1.5-litre diesel engine that is much smaller in displacement but outputs a respectable 121 bhp of maximum power and 300 Nm of peak torque. It comes mated to a manual transmission only. A petrol engine option along with an automatic transmission will be launched in April 2020. Until then, we think it would be better to compare the Marazzo with only the 2.4-litre variant of the Crysta. Even though the base diesel model of the Crysta offers more in terms of power and torque, the Marazzo is 200 KGs lighter, which means all the power/torque advantage of the Crysta is compensated.

Underpinning the Toyota Innova Crysta is a ladder-on-frame chassis. Its engine is longitudinally mounted and sends power to the rear wheels. The Mahindra Marazzo also gets a ladder on frame chassis, but the entire setup is a lot different from what the Crysta offers. For the Marazzo, the engine has been mounted transversely and sends power to the front wheels. This makes the new Mahindra MPV the first passenger vehicle in the world to have a transversely mounted engine with FWD layout on a ladder-frame chassis. Mahindra has patented this arrangement as ‘Best of both worlds’ as it offers the benefits of a transverse engine found on monocoque cars and the durability of a ladder on frame chassis. However, in spite of this clever arrangement, one can’t ignore the performance advantage that Innova holds due to the higher number of engine and transmission choices. Hence, the Toyota Innova Crysta is the winner of this round of Mahindra Marazzo vs Toyota Innova Crysta.

Thanks to a smaller engine and lighter weight, it was always obvious that the Marazzo would offer a higher mileage. The Mahindra Marazzo MPV has an ARAI-rated mileage of 17.6 kmpl. In comparison, the Innova Crysta ends up being a lot less fuel efficient. Its 2.4-litre diesel engine offers an ARAI-tested mileage of 15.1 kmpl while its 2.8-lite diesel variant offers only 14.29 kmpl. From this, it gets quite clear that the Marazzo would have lower running costs as compared to the Crysta. Hence, the new Mahindra MPV ends up winning this round of our Mahindra Marazzo vs Toyota Innova Crysta comparison.

Clearly, both the Marazzo and the Crysta are great MPVs. However, in terms of value, it’s the Marazzo that gives you the best bang for your buck. But for now, it’s the Crysta that offers two diesel engines, a petrol engine, and even an automatic transmission. It also feels more premium and has a higher brand value. But for all those who are on a budget, the Marazzo will be a good alternative to the Crysta. But in case you don’t mind spending more, opt for the Innova with your eyes closed. It’s more premium, has an automatic transmission, more powerful engines, and offers the peace of mind that comes from owning a Toyota product. Hence, it’s you who needs to decide the winner of our Mahindra Marazzo vs Toyota Innova Crysta comparison by your exact requirements.