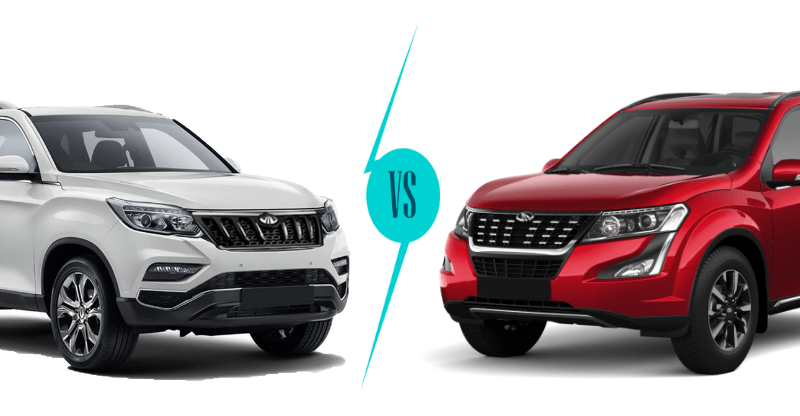 If you haven’t noticed already, Mahindra and Mahindra is going all guns blazing for the past decade. In 2018, they’ve already made two major launches namely, the brand-new XUV500 and their first MUV, the Marazzo. If you think the streak ends here, you are very much mistaken. Their main offering for this year will be seen in the form of a brand-new flagship product codenamed Y400. This new premium SUV shares its platform with the 4th Generation SsangYong Rexton. It is all set to take its place above their existing flagship the XUV500. Today, we’ll be pitching the supposed XUV700 against the XUV500 to get an idea of what all more you can expect from the new Mahindra flagship. So let’s commence with our Mahindra XUV700 vs Mahindra XUV500 face-off.

Mahindra launched a brand new updated XUV500 just a few months ago. To everyone’s amazement, this updated model was actually priced cheaper than the ongoing version. The XUV500 starts at a price of Rs.12.58 lakhs for the base W5 variant and goes all the way up to Rs.19.29 lakhs for the top W11(O) AWD Automatic variant. Considering that you are getting a loaded 7-seater SUV at the price point of 5-seaters, that is some insane value for money. Similar to the XUV500, the XUV700 is also expected to deliver similar levels of VFM. The XUV700 will be participating in the premium SUV segment along with proven cars like the Ford Endeavour and the Toyota Fortuner. As per sources, the XUV700 is expected to sit in the price bracket of Rs.20-25 lakhs. Mahindra is infamous for competitive pricing so you can surely expect that the XUV700’s price won’t cross Rs.25 lakhs and is definitely going to undercut it’s competitors.

The one thing that we have concrete confirmation about is that the XUV700 is going to be based on the 4th Generation SsangYong Rexton. So you can certainly expect the XUV700 to share its dimensional attributes with the Rexton. Going by the spec sheet, it is very much apparent that the XUV700 is indeed going to be the bigger vehicle. This aspect is necessary since unlike the XUV500, the XUV700 needs to hold up against butch SUVs with intimidating proportions. The XUV700 is bigger than the XUV500 in every dimensional aspect. It is longer and has more wheelbase which means more leg room for the occupants. More width means better comfortable seating for 3 passengers on the 2nd row. The height is more by only 40mm but still should make a somewhat impact to the available headroom. The XUV700 is also much heavier breaching the 2-tonne mark for every variant. However, this isn’t a cause of much worry as it sits right in between its key rivals, the Fortuner and Endeavour.

Mahindra is yet to release any official statements regarding the XUV700’s engine. Going by the various rumors and speculations, the XUV700 will get petrol and diesel variants just like the XUV500. It is expected to come with a 2.0-litre petrol engine and a 2.2-litre diesel engine. Going by the specs of the G4 Rexton, the diesel engine should be churning out about 180 bhp of horsepower at 4000 RPM and 420 Nm of torque at 1600-2600 RPM. You can expect the petrol powerplant to put out about 220-230 bhp of power and torque in the range of 330-350 Nm.

The Mahindra XUV500 has an ARAI claimed mileage of 14 kmpl for the Diesel variant and 13.85 kmpl for the petrol variant. The combined mileage is rated at 14 kmpl and surprisingly enough even the automatic variant generates the same figures.

Going by the size and power output of the speculated XUV700, you can expect a mileage in the 11-13 kmpl mark. This is again quite acceptable for an SUV of its expected proportions. Similar to the price, you can certainly expect Mahindra to be competitive here as well against the rivals.

The Mahindra XUV500 since it’s inception in 2011 stole the limelight for its impressive set of equipment. The level of equipment on the XUV500 considering its price bracket was nothing short of grin-inducing. Some of the highlights were:

Similar to its younger sibling, the supposed XUV700 displayed at this year’s auto expo boasted an even more impressive list of equipment. In terms of the exterior appearance, you can probably say that the XUV500 looks more eye-catchy but the XUV700 does have a ton of elegance. It’s only when you move to the inside that you are welcome to a brand-new realm. Despite getting more contemporary interiors with this facelift, the XUV500 is nowhere close to the XUV700. The XUV700 feels amazingly plush and luxurious from the inside

The entire dashboard is decked with sophisticated wood and leather trims. These leather trims extend to as far across as the door panels as well. Unlike some of the other cars in the market, the wooden panels used here simply ooze quality. As for as the other features are concerned, the XUV700 packs a better version of everything on the XUV500. The seats are 8-way adjustable instead of 6-way. The twin-pod display comes with its own LCD information screen here. 7-inch infotainment screen makes way for a 9.2-inch display. Instead of reverse park assist, there is a 3D view system that stitches multiple angle images for the best perspective of parking where you can’t see. You thought 6-airbags were enough? Here you will get 9.

All in all, what we have found out is that the XUV700 is a much better car than the XUV500, in almost every aspect. Some people might not find the XUV700 to look as striking as the XUV500 but that is again subjective. In terms of everything else, the XUV700 wins straight out. It packs a stronger punch, has more room and astonishingly packs in so much equipment that XC60’s and Q7’s are feeling threatened. The XUV700 is perhaps one of the most anticipated cars of this year and we also eagerly await its launch. Do keep an eye on our blog for more future updates and articles on the upcoming Mahindra flagship, XUV700.