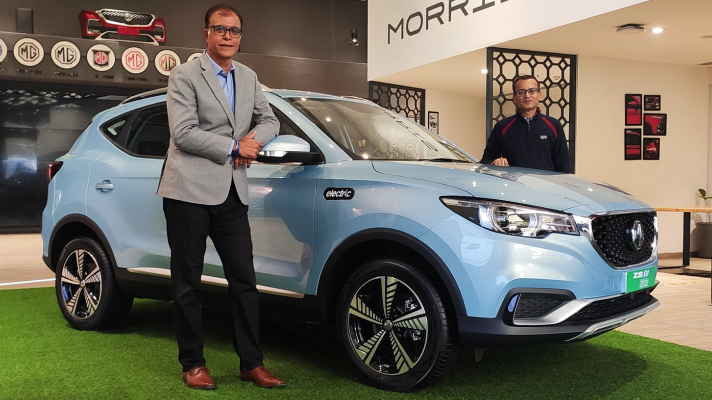 EVs or Electric Vehicles are becoming increasingly popular these days. Where there was once a massive lack of awareness amongst the car-buying audience, that is no longer true today. More and more people are beginning to understand and accept that EVs are not going away anywhere anytime soon. In fact, local governments are already imploring people to choose EVs over regular petrol or diesel cars. On top of that, some states are also rolling out incentives for those who go electric. Then there is the niche factor when one goes for an EV since they still aren’t all that common on our roads. Without a doubt, one of the best-selling electric cars in the country is presently the MG ZS EV.

MG Motor introduced the ZS EV in India just over a year ago. And within that short time period, the brand has already racked up over 1,300 orders of the ZS EV. Given how popular the model was, MG isn’t sitting on its laurels. With orders still coming in, the automaker has already launched the facelifted iteration of the ZS EV in India. It comes with a few cosmetic changes to the outside and some added features on the inside, while also offering more range than before. Thanks to the upgraded 44.5kWh battery, the 2021 MG ZS EV can now achieve a maximum range of 419 kilometers. While attaining such a range in the real world may not be very practical, one could definitely try getting close.

The MG ZS EV isn’t the only electric vehicle in its segment. Cars like the Tata Nexon EV and Hyundai Kona EV are there, too. Of course, the Nexon is by far the most affordable, with prices starting at Rs 12.80 Lakh (ex-showroom, Delhi). In comparison, the MG ZS EV is appreciably more expensive as it starts from Rs 20.88 Lakh (ex-showroom, India). But unlike the Tata, which is built from scratch in India, the ZS EV comes as a CKD unit before being assembled at MG Motor’s plant in Halol. Despite its higher sticker price, it wouldn’t be the hardest job trying to find a ZS EV on our roads.

Even more interesting is what the future for cars like the ZS EV looks like. According to MG Motor, the demand for the facelifted ZS EV is projected to grow considerably. The company believes that in the next year, it will probably sell over twice as many cars as it did in 2020. This might very well happen as more charging stations pop up all over the country, courtesy of tie-ups with the likes of Fortum and Tata Power. With petrol and diesel prices going up almost every other week, electric vehicles could be the answer for many buyers. While the purchase cost of an EV is undeniably higher than a similar petrol/diesel car, running costs are fabulously low.

But the fact remains, while EVs will continue to have an ever-increasing presence in our market, we need cheaper models. Not everyone can afford to buy a Rs 20-lakh-something EV just in hopes of lower running costs and a greener conscience. However, as time passes and manufacturers see a surge in demand, a wave of affordable electric cars will definitely come. In the meantime, models like the MG ZS EV will continue to move more and more units. While all that happens in the background, buyers need to work on dealing with range anxiety. That, however, might take many a wee bit longer to accomplish.