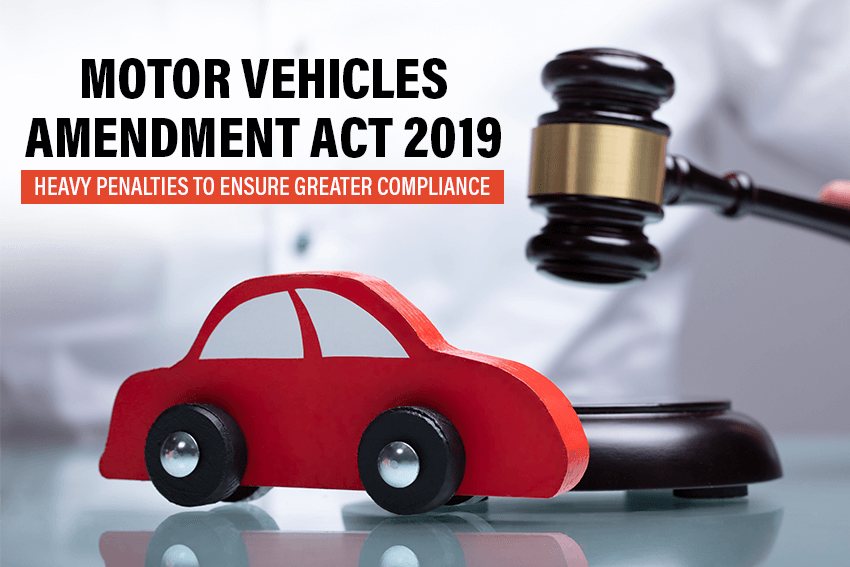 The new Motor Vehicle Act 2019 or the Motor Vehicle (Amendment) Act 2019 was implemented in September last year. With the introduction of the new act, several traffic fines have increased substantially and it is believed that the stricter penalties will no help the authorities curb the menace of road accidents caused due to negligent driving.

What is Motor Vehicle Bill?

Before the new Motor Vehicle (Amendment) Act 2019 was passed in September last year, Lok Sabha initiated this process with the passing of the Motor Vehicle (Amendment) Bill in 2017. The amendments were targeted towards bringing changes in the transport sector to encourage safer driving practices among Indian motor vehicle drivers. The draft for the amendment was put forward in the lower house of the Parliament, with a proposal to impose strict fines on the violators of traffic rules.

The Motor Vehicle Bill 2017 (amendment) aims to propose stiffer penalties for varied traffic offences. Following is the summary of the proposed bill-

What is Motor Vehicle Act?

The Motor Vehicles Act came into existence in 1988. It laid down rules and regulations on all aspects of road transport, including registration of motor vehicles, controlling their permits, traffic regulation, insurances and penalties. Also, the Motor Vehicle Act makes it compulsory for a driver to have a valid driving licence. Also, no vehicle can be used without a registration number.

Under the new Motor Vehicle Act 2019, the penalties for almost all driving errors have gone up significantly, especially if you consider serious offences like those of drunk driving.

The Traffic Rules in India are set as per the New Motor Vehicle Act 2019. Under the revised act, the penalties for traffic violations have been increased significantly and have turned more stringent than ever.

Driving Without License: If you are caught driving without a licence, a fine of Rs 5,000 will be required to be paid by you. This is an increase of ten times from the earlier fine of Rs 500.

Driving With Disqualified DL: In case one is found driving with a disqualified licence, he or she can be fined for Rs 10,000. This fine was just Rs 500 earlier.

Driving Under the Influence of Alcohol or Intoxicating Substance: Drunk driving or driving under the influence of alcohol or substance is among the biggest concerns today. Of course, it’s also a serious offence as it poses a great risk to the safety of both the driver and that of other road users. Hence, as per the new traffic rules and fines, the penalty that the offender has to pay has been increased by several times. Compared to the old penalty of Rs 2,000, a first-time offender now has to pay Rs 10,000 and/or face imprisonment of 6 months. Also, the second time offender has to pay Rs 15,000 and can face up to 2 years of imprisonment.

Not Wearing a Helmet: The traffic fine for riding a two-wheeler without wearing an ISI-approved helmet has been increased from Rs 100 earlier to Rs.1,000 now.

Racing and Speed-testing: Another highly serious offence that is often seen being committed on our roads is that of racing and speed-testing. For this, the fine has been bumped up from Rs.500 to earlier to Rs.5,000 and/or imprisonment of up to 3 months for the first-time offenders and Rs.10,000 and/or imprisonment of up to 1 year for repeat offenders.

Offences by Juveniles: As before, there is no punishment to the juvenile for this but the owner of the vehicle or the guardian of the underage driver now has to pay a fine of Rs.25,000 along with facing imprisonment of 3 years.

Offences Committed by Enforcing Officers: As per the Motor Vehicle Act 2019, there is no fixed penalty for this offence but the new fine is double the penalty under the relevant section.

Having Two Driving Licences: In case one is found having two or more driving licenses, he or she can be penalized. Also, from now, all driving licences that are to be issued will have a smart chip that can be accessed by the traffic police through a QR code.

Reason for hike in fine

It is not uncommon to see a motorist that tries to drive on the wrong side of the road or drive in the non-permitted direction on a one-way road. Such antics are not only illegal but also immensely dangerous. It is actually high time people start respecting traffic rules and to become strict with them, the authorities have hiked the penalties. The increase in the fine amount is to teach people to take rules and regulations more seriously.

Change in residence address: Since the introduction of the new Motor Vehicle Act 2019, one can change the address in his or her driving licence online and this one can apply for this to any RTO office in the state.

If the motor vehicle is used by the child: Allowing your minor child to drive or ride a motor vehicle has turned out to be an expensive affair since the rollout of the new Motor Vehicle Act 2019. In case you are caught allowing your child to use the motor vehicle, the registration of the vehicle can be suspended for a period of one year. Also, after the period of one year, you will have to apply for re-registration. Also, as per the, sections 199A and 199B of the Motor Vehicle Act Act, you will have to pay a fine of Rs 25,000 and even face imprisonment of up to three years. Also, the minor driver will be ineligible to obtain a learner’s licence until the age of 25. Also, there will be an annual increase in the fines by up to 10 per cent.

The introduction of the new Motor Vehicle Act 2019 is clearly aimed at ensuring that motorists start taking traffic rules more seriously, which, in turn, will be promotion of safe and sustainable mobility across the country. We hope that with the introduction of the amendments, the people would now become more careful while using their vehicles. Also, we are hoping for a serious drop in cases of drunk driving, non-usage of seatbelts, rash driving, overspeeding and racing.

A: Motor Vehicles Act 2019 was rolled out in India since on 1 September 2019. As per the amended act, there has been a significant increase in the fine for many offences in order to curb the menace of serious offences like those of driving without driving licence, drunk driving, overspeeding, et al.

A: Yes, it was important to amend the motor vehicle bill as it aims at drastically changing the 30-year-old law and making motorists more responsible. It also makes Aadhaar mandatory for getting a driving licence and vehicle registration, which, in turn, is required for online services such as those of renewal of these documents.

A: The 196 MV Act pertains to driving an uninsured vehicle. In case someone is found driving a motor vehicle in contravention of the provisions of section 146, he shall be punishable with imprisonment of up to three months, or with a fine of up to Rs 1,000 or both.

Q: What is Section 129 of Motor Vehicle Act?

A: As per the section 129 of the Motor Vehicle Act, every person, above four years of age, driving or riding or being carried on a motorcycle of any class or description shall, while in a public place, wear protective headgear conforming to ISI standards.

A: As per section 187 of the Motor Vehicle Act 2019, anyone who is caught driving dangerously can face a fine of up to Rs 5,000 and/or imprisonment of six months. Repeat offenders can be fined up to Rs 10,000 and can be imprisoned for up to 1 year.