No point having an extra car that just remained parked

No Point Having An Extra Car that Just Remained Parked

No Point Having An Extra Car that Just Remained Parked On 31st of October, 2018 Mr. Govil Aggarwal visited the Ghitorni Branch of CARS24 to sell his Hyundai i10, a car with minimum usage. Mr. Govil, works as Additional Director with an MNC in Gurgaon, believes in simplicity and minimalism.

While, Mr. Govil’s car was being evaluated by one of our CJs, Mr. Deepak Upadhyay, RA at CARS24 Ghitorni Branch tried to strike a conversation and candidly asked him about the reason why he was selling his old car. This is what he said,

“I have 2 more cars in my house. This i10 was unnecessarily lying in the parking area for a long time. In a span of 6 years, we had travelled only 31kms in this car. So, we were thinking of what to do with this car. One day we were watching TV and saw CARS24 advertisement and thought of visiting the nearest branch just to get the price of this car.” And, so here I am to happily sell my Hyundai i10 to CARS24.”

Mr. Govil Aggarwal is a true gentleman. We praise his viewpoint that one should possess things which one can make use of. Else, it is better to get rid of the same as it is pointless to possess something that does not have a proper usage. 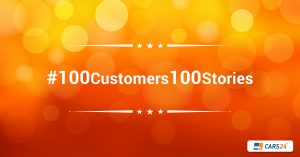