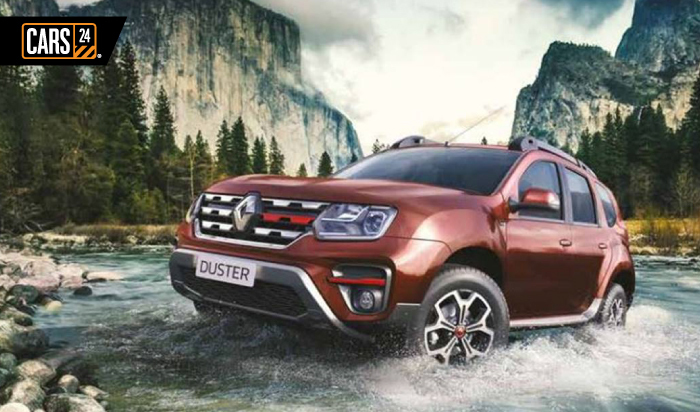 The local subsidiary of Renault has introduced the turbo-petrol variant of the Duster in the local car market. This is the same model that was showcased at the Auto Expo 2020 back in February. The new model has gone on sale at three trim levels with a price range of Rs 10.49 lakh to Rs 13.59 lakh (ex-showroom, India). It is available in both manual and automatic transmission options.

The just-launched Renault Duster turbo-petrol model looks almost exactly like the regular Duster, with the only difference arising out of red accents and a Turbo badge. The interior of the SUV, however, is totally unchanged, and additionally the top-of-the-line Renault Duster RXZ variant now comes with more bells and whistles, such as an 8.0-inch touchscreen infotainment system, remote aircon, idle start-stop system, hill-start assist, and 17-inch alloy wheels.

The Renault Duster turbo-petrol is powered by a 1.3-litre turbocharged petrol engine that benefits from a direct-injection technology that results in a maximum power of 156 PS along with a peak torque of 254 Nm. With this, the Duster turns out to be the most powerful SUV of the segment. The new model is available with both manual and automatic transmission options – 6-speed MT and 7-step CVT automatic unit. With this, the Duster turns out to be even more powerful than the 1.4-litre turbo-petrol models of the Hyundai Creta and Kia Seltos.

The new Renault Duster Turbo Petrol model is available in a price range of Rs 10.49 – 13.59 lakh (ex-showroom). Hence, it ends up being roughly Rs 2 lakh costlier than the 1.5-litre naturally-aspirated variant. However, it’s certainly the most affordable turbo-petrol SUV of its segment and makes incredible sense for anyone who needs a powerful small SUV but is restricted by budget constraints.