The Tata Hexa was launched in January 2017 and goes on to rival primarily the Mahindra XUV500. However, in spite of being a well-sorted model, it has pretty much failed to leave a dent on the popularity of the XUV500. In fact, it’s the recently launched Tata Harrier that has left the XUV500 struggling to maintain its sales momentum. The Hexa, however, enjoys a small but loyal base of followers who swear by the mile-munching capabilities of the company’s flagship model. In spite of being more than 2 years old in the market, the Hexa still has a fair bit going for itself and makes for a good option in both new and second-hand car market. Here’s all there’s to know about the Tata Hexa price for a new and old car, mileage, specifications, review and more.

As can be observed in the above table, the Tata Hexa price in the new car marker starts at Rs 13.26 lakh at all major cities, which puts it in the crosshairs of the Mahindra XUV500. It also means that the Hexa is placed close to its own stablemate, the Harrier. The top-end model, on the other hand, costs well above 22 lakh rupees at most places and even goes on to rival the high-spec trims of the equally comfortable and arguably more reliable Toyota Innova Crysta.

The Tata Hexa is available in 7 colour options, viz.

As the Tata Hexa is a medium size SUV, it isn’t the best option for all those who are looking for a highly frugal offering. That said, it’s still quite fuel efficient for a vehicle of its class and size. The Hexa has an ARAI-rated fuel mileage of 17.6 kmpl, which equates to roughly 14 kmpl in city and 16 kmpl on highways in the real world condition. 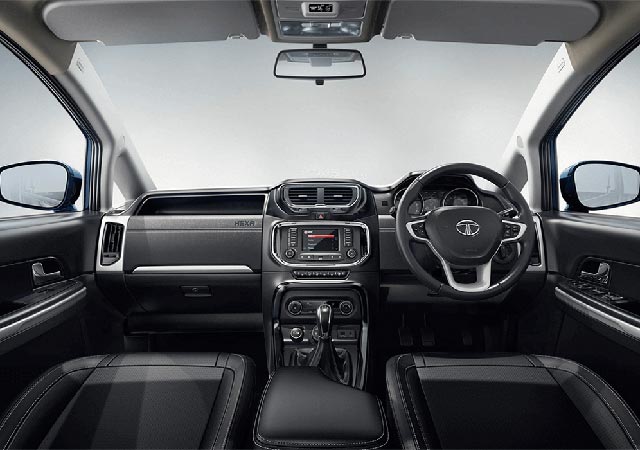 Some of you would remember that the Tata Hexa actually started its life as the Tata Aria, which never sold well due to some misplaced advertisement campaigns and people confusing it for neither being an SUV nor an MPV. In early 2017, the company launched the Hexa, which is basically a refined and a bolder version of the Aria. Even after the launch of the Harrier, which is a much more modern model, the Hexa continues to be the flagship product in the company’s model range. While the Tata Hexa hasn’t been very successful in the market, it continues to be among the most well-sorted offerings in its segment.

Other than offering a bold exterior, the Tata Hexa offers a well appointed cabin that gets an amazing infotainment unit among others. Its touchscreen unit is compatible with Apple CarPlay and Android Auto, and supports a high quality Harman sound unit. It also offers multiple driving modes, which makes it quite capable off the road. The optional 4×4 Borg Warner system helps the SUV make short work of the challenging terrain, while the automatic transmission makes it an excellent highway cruiser.

Does Tata Hexa have an automatic transmission?

Is Tata Hexa a good car?

Yes, definitely, In fact, the Hexa is among the most underrated cars around as it’s a highly capable model that can easily take on the much more popular Mahindra XUV500. The Hexa offers great value for money, which makes it a really good choice for SUV buyers.

Is Tata Hexa an SUV?

While the Tata Hexa is based on the MPV-like Tata Aria, its rugged looks and the capable 4×4 off-road hardware makes it a true blue SUV.

Is Tata Hexa a safe car?

The Tata Hexa has been bestowed with numerous safety features, which include ABS with EBD, dual front airbags, hill hold control, vehicle stability control and traction control. Other than this, it benefits from Tata’s robust build quality and easily cocoons the passengers.

As the Tata Hexa is a slow selling product, which even reflects in its used car value. Hence, its resale value is not as good as that of the Tata Harrier. .

Which colour is the best for Tata Hexa?

Colour is a matter of personal choice, and hence, it’s difficult to ascertain the best colour choice. However, the Hexa is available with seven colour options and you can choose from the one you like the most.

If you wish to buy a used car, a well maintained second hand Tata Hexa makes a lot of sense for all those who need a well rounded SUV that is considerably hassle-free to own and run. The Hexa is a good choice for all those who want spacious and a feature-loaded SUV in the mid-size segment.

Above are the few used Tata Hexa cars on sale in Delhi-NCR.

You can also contact us to sell your used car and get the best price for it. We even take care of all the paperwork free of cost, while we buy cars of every make after systematically evaluating it through our highly specialized processes.