Tyre Burst: Why Does It Happen and How You Can Prevent It From Happening

The Dangers of Tyre Burst: Why It Happens and How Can You Prevent It From Happening Needless to say, your car tyres play an extremely important role in the functioning of your car. The 4 tyres present at the end of your car’s axles are the only entities maintaining contact between your car and the road surface. Now imagine a harrowing situation wherein you are driving at a steady speed and the tyre explodes. The next thing you know, you are completely out of control, letting your panic take over and nobody knows if you’ll safely veer off the road or straight into oncoming traffic. This isn’t a fictitious situation and is actually possible if you come face to face with a tyre burst. Tyre burst occurs due to a variety of reasons and has a very high potential of leading to catastrophic accidents.

So in this article, we’ll take a look at some of the primary reasons as to why a tyre burst occurs. We will also list out some measures you can take to prevent a tyre burst from occurring

Tyre Burst: Why Does it Happen?

In broad terms, a tyre burst occurs due to rapid loss of pressurized air from the tyre. When the structural integrity of the tyre is compromised, it is unable to hold all that air inside. Due to this the pressurized air escapes by tearing through the tyre rapidly causing an explosion and severe damage to the tyre surface. Let’s look at the reasons as to why this phenomenon could occur.

The sad story that we all already know is that our country’s road conditions are pretty pathetic. Though with practice, we have trained ourselves and our reactions to avoid obstacles, bumps and potholes on the road, sometimes, they are just unavoidable. When you hit such an unavoidable object on the road, there is a high possibility that the resulting impact could slash the tyre surface at some point. This slash is an open invitation for the pressurized air to escape out, thus leading to a tyre burst. Most of India lies in the tropical or subtropical region and is prone to really hot summers. In general, heat is an enemy for almost all parts of your car and especially the tyres. Excessive build-up of heat on or in your tyres is a sure shot provocation for tyre burst to occur. If you remember 8th Class science, temperature is directly proportional to pressure. Heat-build up causes the air inside the tyres to get hotter, pressurized and start expanding. Along with that, there is also friction between the road surface and the tyre which is making it hotter from the outside and weakening the rubber. This heat-build is even more on a hot day. So in short, old tyres plus hot summer day equals sure shot recipe for tyre burst. 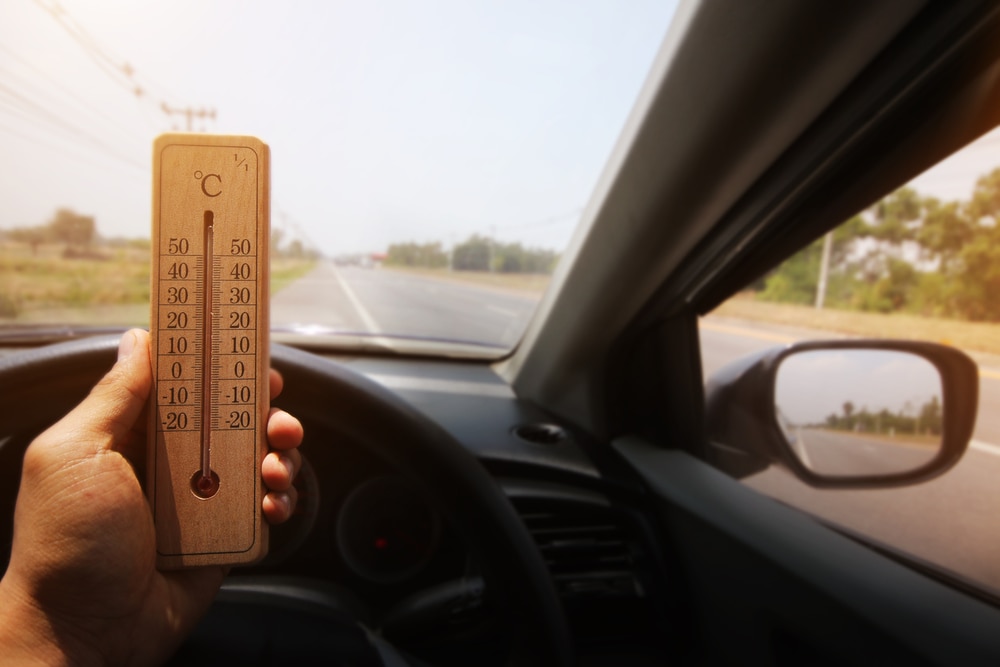 The most common cause of a tyre burst is improper air pressure in the tyres. While over-inflation isn’t a concern, under-inflation is the reason behind approximately 75% of tyre burst induced accidents as per studies. Under-inflated tyres suffer from excessive flexing which will invariably increase your contact patch with the road. This leads to accumulation of more frictional force and in-turn causes excessive heat build-up within the tyre. The heat build-up arising from this case is much higher than what would arise from driving on a really hot summer day. The rest of the story is same as the above point, high inside temperature, expansion of air and boom, there goes the tyre. Keep in mind the probability of tyre burst occurring from under-inflation is much higher than just higher temperature.

Each tyre available in the market is rated for a particular speed which it is meant to function properly at. The tyre materials and construction are made in such a way that it can safely withstand speeds up till that point only. Anywhere beyond that and the tyre structure will be incapable of handling the higher friction levels and give in very quickly. Here the cause of tyre burst will be due to more than one factor, namely heat produced from friction along with the structural limitations. So the possibility of occurrence is again very high in this case. Similar to the consequences of under-inflated tyres, overloading the car can also cause tyre burst in a similar manner. Excess weight in your car will transfer all that load straight to the bottom, i.e. the tyres and result in flexing of the sidewalls. The sequence that will follow is the same as what will happen with under-inflated tyres. Ensure That Your Tyres Are in Good Condition and Shape.

All tyres come with a tread wear indicator bar that denotes when a tyre should be replaced. Ideally the depth of the tread should be 1.5mm. In case, the tyre has worn out, this will decrease and the indicator bar will overlap with the rest of the tyre. In such a situation change the tyre as soon as you can. Preferably drive at slower speeds too in case your car tyre is in that situation.

As we discussed above, under-inflation is one of the major causes of tyre burst. Tyre pressure increases with heat and decreases as temperatures reduce. So be wary of the weather conditions around you as well. Maintain the ideal pressure as mentioned in your car’s manual and everything should be fine. Filling up your small hatchback with 6 people and individual bags of luggage is an open invitation for trouble. Each car is designed to carry only a certain level of weight. Stick to that limit and you should be safe from any incidents.

Choose the Tyre With the Appropriate Speed Rating at all Costs. Big brands have dedicated R&D centres where each product design is meticulously planned and thoroughly tested before being released to the product. They are also homologated by reputed institutions who certify these products for quality. The same will certainly not be the case with unfamiliar brands or imitators. Hence, it is best if you stay away from them. The choice is in your hands, a few bucks of savings or your life.

Stay tuned to our blog for Part 2 of this article where we will address what should be done when you encounter a tyre burst while driving.

Click here to go to part 2 of this article.