The Ford Mondeo made its global debut way back in 1993 as a full-size executive sedan. The Ford Mondeo was built on the CDW27 platform and was a considerable upgrade in the automotive industry both in terms of design and mechanics.

Ford introduced the second generation (MK III) of the Mondeo in 2001 in the global market. The MK III Mondeo was larger, better-styled, as well as more featured-equipped than its predecessor.

For the design of the second generation Mondeo, Ford left behind its New edge design language, and the Prodigy concept car was taken as a design reference.

The updated Mondeo made its way to the Indian market in 2002 as a CBU, and competed against well-established players like the Honda Accord, Skoda Superb, and the Toyota Camry in the luxury sedan segment.

Globally, the Ford Mondeo was available in estate, saloon, and hatchback body types, however, India only got the saloon body state.

Ford discontinued the second-generation Mondeo in the Indian market in 2006. Unfortunately, due to its extremely poor demand, Ford did not introduce future models of the Mondeo (Fusion) in India.

The Ford Mondeo was available in both petrol and diesel models.

The Ford Mondeo was a full-size family sedan that was available between 2001 to 2006 in the Indian market. The Ford Mondeo was built on the CDW27 platform and represented a significant upgrade in terms of design and mechanics in the automobile industry. It looked expensive on the outside, had a well-built interior, and was great fun to drive.

However, being a CBU (Completely Built Unit), the Mondeo was a bit on the pricier side, and therefore, couldn't compete effectively against well-established models like the Toyota Camry, Honda Accord, and the Skoda Superb. Ford discontinued the Mondeo in 2006. The latest avatar of the Ford Mondeo was made available globally till 2020. It was part of Ford's announcement to discontinue most sedans and focus on its SUV lineup.

The Ford Mondeo came in 4 variants in the Indian market. This includes 3 manual and 1 automatic variants. These were Duratec, Duratec HE, Ghia Duratec, and Duratorq DI. The Ford Mondeo was available in three different color options - Steel Mist, Panther Black, and Platinum. The top features on the Ford Mondeo included an AC, front and rear power windows, electric mirrors, CD player, and heated screens. The Mondeo is equipped with safety features such as front, side, and curtain airbags, ABS with EBD, and Electronic Stability Control.

With multiple safety features such as the front, side, and curtain airbags, ABS with EBD, and Electronic Stability Control, the Ford Mondeo was among the safest cars in its segment.

The Ford Mondeo had a highly practical cabin with multiple storage spaces on offer.

Ford Mondeo had a classy and sporty design language, quite distinct in its segment.

The Ford Mondeo boasted a sturdy build quality, with that build-to-last feel.

The front seats on the Mondeo were quite pleasant and cosy. They are well cushioned, and offered good under-thigh-support as well.

Being 4.7 metres long, the Mondeo offered ample legroom to its rear-seat passengers.

There was enough room in the back for three people to sit comfortably, thanks to the wide cabin of the Mondeo.

It is difficult to pinpoint a flaw in terms of ergonomics, as all of the controls and switches were properly located.

Both the diesel as well as the petrol motor retained poor fuel efficiency figures. ARAI claimed mileage for the diesel is 10.3kmpl, meanwhile, it is 9 kmpl for the petrol engine.

The Ford Mondeo was brought in as a CBU to India, therefore, its pricing was a bit on the higher side.

Though the Mondeo looks classy, its straight lines and boxy design may not be to everyone's taste.

The interior of the Mondeo doesn't look all that great. The dashboard design is very simple and plain, and simply fails to provide that sense of occasion that a buyer would expect after paying that kind of price. 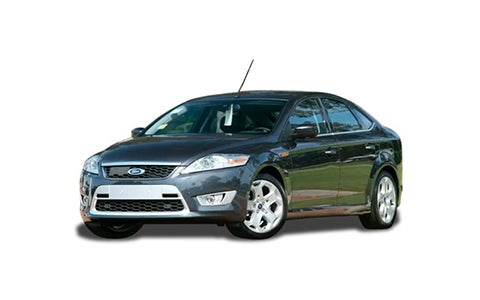 The Ford Mondeo was a full size family sedan brought in as a CBU to the Indian market. The Mondeo had everything that buyers in the executive sedan segment needed, however, the cut throat competition and higher pricing resulted in poor demand. Having said that, the Ford Mondeo is a great car with high-performing engines and precise handling. It also boasts a spacious and comfortable cabin with sufficient creature comfort features.

The Ford Mondeo had a distinct design language that was both classy and sporty in its segment. The Ford Mondeo had a very practical cabin with plenty of storage space, build quality too, was pretty solid. Moreover, the Mondeo was one of the safest cars in its segment, thanks to numerous safety features such as front, side, and curtain airbags, ABS with EBD, and Electronic Stability Control.

The top features on the Ford Mondeo included an AC, front and rear power windows, electric mirrors, CD player, and heated screens. As far as the driving experience goes, though the fuel economy isn't all that great, the Mondeo is quite fun to drive. The engine feels refined and offers good performance. Handling wise, the Mondeo stays planted at high speeds, giving loads of confidence to the driver. The suspension setup is nicely tuned and the ride feels well cushioned over bad roads.

The Ford Mondeo comes out as a well balanced package - it looks classy, is spacious, and comes with many safety features. If you are looking for a large and comfortable used family sedan, the Mondeo can definitely top your list. However, as a rare vehicle, finding one in a clean condition can be extremely difficult.