Its first car was the sensational Hyundai Santro, which was instantly popular amongst hatchback enthusiasts.

The Hyundai i10 Nios comes with the option of a CNG engine and 1.2-litre petrol and diesel engines. Its engine, fuel, and transmission options include:

The 1186cc 3-cylinder U2 1.2 CRDi Diesel engine generates 74bhp and 190 nm of torque. Both of these can be paired with either the 5-speed MT or the AMT gearbox.

It also has a typical front end with a prominently eye-catching grille, a glossy black touch to its aesthetics, bright and shiny lamps with white LEDs and almond-shaped tail lamps and chrome dollops on the door handles. Projector headlamps and fog lamps with regular halogen bulbs are also present, with marvellous 15-inch alloy wheels (with the Sportz Dual Tone & Asta models).

Interiors boast of a stylish dashboard that portrays luxury, attractive vents with a lavish design, absence of an adjustable headrest, height adjuster present in the driver’s seat, tilt-adjustable steering, power windows, infotainment controls, an easily accessible start/stop button, and a glovebox with a small shelf over it.

Hyundai Grand i10 Nios comes with myriads of features, of which the special ones are Power Windows Front, Anti Lock Braking System, Air Conditioner, Power Steering, and an Infotainment System

The Manual Diesel variant provides an average of 26.2 KMPL

The Automatic Diesel variant promises a mileage of 26.2 KMPL.

The Manual Petrol variant averages at around 20.7 KMPL.

The Automatic Petrol variant comes with a mileage of 20.7 KMPL.

As you drive the diesel variant, you feel its tremendous power, albeit with a rumbling sound.

The Grand i10 Nios treads in aggression, driving one gear lower to sync with the surrounding traffic.

It smoothly sets itself in motion when you clock 100 KMPH. However, overtaking would be a tricky affair.

The petrol variants support high-speed rides more than diesel ones do.

The Kappa2 engine has fun revving hard despite there being no compromise with the smooth and easy ride.

The Grand i10 Nios features include an 8-inch touchscreen infotainment system. Even Android Auto and Apple CarPlay are provided with it. Also, it offers a wireless charger, auto AC, keyless entry, and an adjustable driver’s seat. It also provides standard safety features like rear parking sensors and dual front airbags.

Unlike the Ford Figo or the Maruti Suzuki Swift, the Grand i10 Nios offers better height. It allows easy walk-in/walk-out without having to lower yourself into the cabin.

It provides AMT with both petrol as well as diesel engines. Except for the Swift, the Grand i10 Nios is the only car in this segment to do so.

In general, its robust build-quality, spacious room, and hi-tech features make it stand out from the rest.

With a boot space volume of 260 litres, the Grand i10 Nios falls 8 litres short of the Swift.

It doesn’t have the 60:40 split seats as provided in the Swift.

It doesn’t offer diesel engines and utility features like rear headrests in all its variants. On the contrary, its rivals provide these basic features in most of the variants. 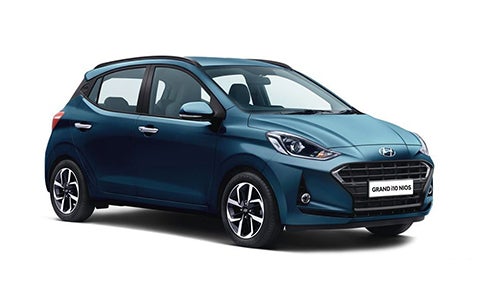 VIEW ALL Grand i10 Nios IMAGES

The experts are impressed with this car’s delivery considering its cost. The Hyundai Grand i10 Nios emphasises comfort and power both at the same time. It doesn’t even let the passengers realise that the gears have been shifted at an average pace! Its dynamics and the grand quotient make it a great budget buy. Its splendid mileage and the assurance of a serene driving experience redefine the segment. Substantially equipped with technology and aesthetics, the Grand i10 Nios is surely made for everyone who’s in love with city rides.

The Hyundai Grand i10 Nios has proven to be better than its rivals in many aspects. For instance, Ford Figo comes with a 7-inch screen without Android Auto or Apple CarPlay. On the contrary, the Grand i10 Nios provides an 8-in screen and Android Auto and Apple CarPlay. During a drive, the Nios takes it reasonably easy on the potholes and the bumpers compared to the Figo and the Swift. It also manages to win against the Maruti Baleno in the form of being more assertive. It offers a turbocharging feature that isn’t present in the Baleno. Also, it comes with a wireless charging feature which isn’t provided with the Baleno. Its mileage, too, is a showstopper and a clear-cut winner in comparison with the Baleno.

The Nios is compactly designed for travelling amidst city areas. It’s specially equipped with features that make driving amongst traffic and chaos pleasant and comfortable. For the Hyundai Grand i10 Nios, experts have concluded that it will be an ideal car for families.

VIEW ALL Grand i10 Nios Features