The Isuzu D-Max was initially launched in 2002 as a pickup truck by Isuzu Motors. It was based on the design of the Chevrolet Colorado.

The second-generation model was launched in 2012. The second-generation updates included electronic stability control (ESC), traction control, ABS and emergency brake assist systems. It also got a stronger ladder-frame chassis that improved its ride and handling quality. The transmission was also upgraded to a six-speed gearbox, with the option of choosing between a manual and an automatic.

The present generation Isuzu D-Max gets a longer wheelbase and a two-door as well as a four-door option. It is based on the upgraded Isuzu Dynamic Drive Platform, which makes it lighter and stiffer. It also gets an upgraded infotainment system with a touchscreen. Terrain management systems such as hill descent controls are also part of the upgrade.

It is available with an 1898 cc engine, which produces a maximum power of 160.92 bhp and a maximum torque of 316 Nm. The engine is fitted with a turbocharger and an intercooler. The S CAB variant gets a larger 2499 cc engine for improved fuel efficiency.

It offers a 6-speed automatic as well as a manual gearbox. The second-generation offered a 5-speed gearbox as an option, which has been discontinued.

The latest model of the Isuzu D-Max was launched on 10th May 2021. The D-Max is an SUV type pickup truck, manufactured by Isuzu. The present model is a third-generation variant. This third-generation Isuzu D-Max offers five variants, which are available with diesel engines. These variants are available with a 6-speed automatic and manual gearbox. The V-Cross 4x4 Z is the top-selling model of the D-Max. Other models, such as the V-Cross 4x4 Z Prestige, offer a premium fit and finish to the car’s exteriors and interiors. The D-Max comes with nine colour options, among which the Red Spinel Mica and the Black Mica are the most popular colours. The rest of the colours include shades of silver, white blue and grey. The 2021 model gets a new BSVI upgrade for the engine along with an electrically adjustable steering column, Bi-LED headlamps and a 7-inch infotainment system with touchscreen. The option of cruise control is available with top of the range models. It also has advanced safety features such as hill ascent/descent controls, traction and electronic stability control. Other features like ESC and ABS are standard across all the variants. The price of the 2021 Isuzu D-Max starts from Rs. 11.59 Lakhs and goes up to Rs. 25.59 Lakhs. As the D-Max is a unique model, it does not have any natural rival, but it competes with SUVs such as the Tata Harrier, Mahindra XUV700 and the Kia Seltos.

It offers great mileage of up to 17 km/l and is economical for long-range driving and transportation purposes.

The power and torque ratios are good considering its size and dimensions. The 316 Nm of torque provides ample pulling power on difficult terrains.

The advanced chassis design offers great safety on the roads. It has been rated with five stars by the ASEAN and Euro NCAP.

It has great off-roading capabilities because of the upgraded shift-on-fly four-wheel-drive system. The electronic stability controls give it improved dynamic handling.

It has a large carrying capacity and can carry loads up to 215 kgs.

The built quality of the car is durable and rugged, and the parts are made to last long even with continued usage.

It has a distinctive road presence and the striking character of a pickup SUV.

The ride quality is stiff and somewhat uncomfortable for long range drives.

The interior design is not very plush and there are parts on the dashboard, which are made of low quality plastic.

The top of the range variant with four-wheel-drive option, is expensive as it can cost up to Rs. 25 Lakhs.

The rear seats are uncomfortable, and the rear passenger space is cramped.

None of the models get rear disc brakes.

Although it has good off-roading ability, it does not have a smooth ride quality for regular roads. 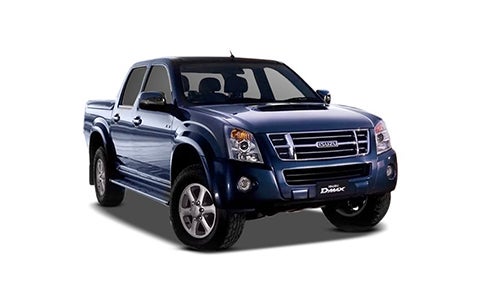 The D-Max is a tough car with great off-roading potential. It has a rugged and strong body-on- frame design that allows it to absorb shocks, while driving on uneven terrains. Its unique design allows it to carry over 200 kg of cargo, thus making it a reliable transportation vehicle. With the new and improved BSVI engine, it gets a higher torque and power figure. The four-wheel-drive system paired with the 6-speed gearbox makes driving easier on difficult roads. The 2499 cc engine has lower power and torque output but a great mileage of 16.56 km/l, while the 1898 cc engine produces 360 Nm of torque and 161 bhp. A buyer can choose among these two options based on their preference of mileage or performance. The SUV pickup design gives it a distinctive appearance and as it does not have any natural rival, it is one of its kind in the market. Safety wise it has many features such as braking assist system, parking sensors and cruise control. It also has a five star safety rating.

However, it misses on tech features such as connectivity and navigation. It also has an inexpensive interior which makes it look dull and less luxurious. In terms of passenger space, the rear seats are cramped and offer limited movement in the back. The ride quality is also stiff and uncomfortable for long drives and on regular roads. But given its performance and safety features, it is a good and reliable car. It can function as a mid-size SUV in terms of carrying capacity while offering a great off-roading character. It is a good choice for buyers who are looking to drive a distinctive SUV, which has good economy as well as balanced all-terrain performance.