Launched in 2011, the e20 electric was Mahindra’s attempt to bring efficient electric mobility solutions to the Indian market.

The e20 was based on the Reva platform; it was essentially an enhanced Reva.

In 2016, Mahindra launched the second generation of the e20, called the e20 plus. It had an improved exterior design and better features.

Initially, it was made available in four variants - P2, P4, P6, and P8. However, later, Mahindra cut it down to only two variants for the private vehicle market.

Owing to its quirky design and poor charging infrastructure in India, the e20 plus faced extremely low demand.

Consequently, on 31st March 2019, the last e20 rolled out of the Mahindra electric manufacturing unit.

Mahindra showcased the facelifted version of the e20 plus, the e20 Nxt concept, in the 2018 Auto Expo. The e20 Nxt will bring better styling, premium interiors, and advanced features over the outgoing model.

The e20 Nxt will be powered by a 72-volt battery that will produce 40 hp of power and 91 Nm of torque and provide a range of 140 kilometres.

The e20 Nxt will be available only in fully electric variants.

The e20 Nxt will be offered with an automatic gearbox.

The e20 Nxt is a four-door electric vehicle manufactured by Mahindra. It is one of the cheapest four-door fully electric vehicles in India. However, the e20 Nxt is a concept vehicle that Mahindra showcased at the 2018 Auto Expo in Noida. The e20 Nxt is a facelifted model of the e20 Plus with improved styling elements, added features, safety, and better efficiency. The e20 Plus was introduced in 2016 in India and was the second-gen version of the e20 electric launched way back in 2011. The e20 Plus was discontinued recently in 2019. There hasn’t been any official word about the e20 Nxt’s launch in India by Mahindra; however, if Mahindra plans to begin its production, expect the e20 Nxt to be launched somewhere around 2022.

The top features on the Mahindra e20 nxt include projector headlamps, LED DRLs, diamond-cut alloy wheels, a large touch screen infotainment system, and mobile app connectivity that allows the user to remote lock/unlock, pre-cool the cabin, and pre-check other information about the vehicle.

The e20 Nxt will be one of the most affordable fully electric vehicles that you can buy in India.

The e20 Nxt has a quirky and youthful design that matches its character.

The cabin on the e20 Nxt is considerably improved over the outgoing model and certainly looks premium.

The e20 comes with remote connectivity features via a mobile app that allows you to lock/unlock your car, operate the AC system, check the battery percentage, and more.

Thanks to its tiny dimensions, driving the e20 in the city will be a piece of cake.

The instant torque delivered by the electric motor will make operating the car in stop-go city traffic reasonably easy.

The Mahindra e20 ranks very low in terms of safety. In fact, the e20 plus did not even have features like airbags and ABS, and hence it had failed in crash tests.

Ride quality on the e20 is quite inferior. The car crashes into large bumps and fails to absorb the uneven road patches on the road, making it quite uncomfortable for the passengers.

As a vehicle mainly built for city commutes, it has an underwhelming battery performance and range, making it highly impractical for long drives.

The not so usual shape and design of the e20 are quite polarising and will not be to everyone’s taste.

At an expected price range of around Rs 6-8 lakhs ex-showroom, the e20 Nxt will still be one of the cheapest EV cars to buy in India. However, you will have to also compromise on multiple things like performance, safety, and space. 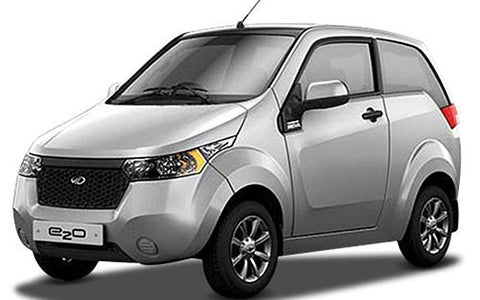 The e20 Nxt is a fully electric vehicle based on the Reva, and it replaces the outgoing e20 Plus. The e20 Nxt features revised exterior styling that includes improved design for the projector headlamps, LED DRLs, LED turn indicators, LED tail lights, redesigned front grille, new diamond-cut alloy wheels and body cladding. Overall, it looks more futuristic and appealing. However, being a concept vehicle, not all exterior changes will make it to the production variant. The e20 nxt also features a new neatly designed dashboard design that houses the large touch screen infotainment system in the centre. Dimension too, the e20 nxt is larger than the e20 plus, allowing better interior space. In terms of the powertrain, the e20 nxt is expected to be powered by a 72-volt battery that will produce 40 hp of power and 91 Nm of torque and will provide a range of 140 kilometres. In conclusion, the Nxt update on the e20 will make it a much more appealing and balanced package.

Due to the lack of options in the evening segment in India, the e20 nxt will be one of the cheapest options. Plus, it has a lot of unique features, including mobile app connectivity. Furthermore, owing to its small dimensions, the e20 nxt will be an absolute beginner-friendly vehicle, and driving one in the city would be fairly easy.

The e20 plus lacked essential safety features like airbags and ABS. However, Mahindra is expected to improve the safety of the e20 nxt by offering all the required safety features.