Before Mahindra acquired SsangYong, the Y200 series Rexton was produced from 2001 to 2006, under the license of Mercedes Benz.

The first model of Mahindra Rexton was introduced way back in 2001 and managed to grab quite a lot of attention. However, the Indian model and version undeniably remain the best.

The first facelift of the model, Rexton II, was released in early 2006 and featured several new features to sustain the environment.

The second facelift, the Rexton W, was the first facelift model co-produced by Mahindra and SsangYong.

The second generation of the Mahindra Rexton, the Y400 series, was released in 2017 and featured both manual and automatic transmission forms. The safety driving equipment with increased towing capacity and an eclectic parking brake system attracted the car industry and brought success to the stakeholders.

The model features some of the most comfortable high-end features available at an affordable rate without compromising the quality.

The added sophisticated safety features continue to amaze the industry stakeholders and customers.

The overall shape of the tailgate was kept intact, but the manufacturer introduced thinner T-shaped LED lights for an overall sleek look. Unlike the rear end, the front haul received major changes in terms of appearance.

Mahindra G4 Rexton’s second update since its release was launched in November 2020. The current model received more modifications than just the look and design. Mahindra successfully built hype around the updated release by teasing the audience with glimpses of it.

The Mahindra G4 Rexton comes in two variants - the Rexton W RX6 and the Rexton W RX7. Both of these variants have 2696 cc Diesel Engines. The car is available in four different colours: Opulent Purple, Satin White, Volcano Black, and Moondust Silver. These colours offered a sleek look and added a touch of elegance to the modified model.

The cohesive look and extremely edgy design are some of the top advantages of the Mahindra G4 Rexton. However, the added safety benefits steal the attention and deserve appreciation. The LED headlamps and LED DRLs were added to make the grille design more comprehensive and cohesive. Moreover, the lower half of the newly updated bumper got an extremely edgy design and houses LED fog lights. As for the side view, the latest update of the Mahindra G4 Rexton got large multi-spoke alloy wheels and chrome window lines going around the complete DLO area. Thus, the upgraded profiles look edgy, seamless, and compliment the modern designs. Mahindra has stepped up its game a few notches with the new car launch.

The Ex-Showroom Price of the model varies between INR 22.2 Lakh and INR 23.5 Lakh. However, the On-Road price of the Rexton G4 is around INR 27.51 Lakh. The advanced features and justifiable price provide an advantage. Still, the Mahindra G4 Rexton faces tough competition from its major competitors like - Hyundai Tucson, Honda CR-V, Tata Safari, and Tata Harrier.

The newest Mahindra Rexton is sleek and abides by the contemporary stylebook. The interior and exterior finish has surpassed the standards of Mahindra itself and all Indian Automobile Manufacturing companies.

The updated model has retained the look of SsangYong’s mid-segment models and looks compact.

As for safety and comfort features, the model includes top-of-the-line features and is within the Indian standard price range for SUVs.

The vehicle is smooth on typical Indian roads filled with potholes and can easily withstand badly uneven roads.

The pickup is great, which makes it suitable for both learners and advanced drivers.

The engine torque and the capacity of the Mahindra Rexton G4 outperform that of top-of-the-line cars like Mercedes and BMWs.

The automatic control for every setting makes the car a further lucrative choice.

One major drawback is that, unlike the widely loved Mahindra Scorpio, the Mahindra Rexton is not suitable for longer trips and feels uncomfortable.

The chromed wheels are more prone to rust and corrosion, which means that regular vehicle maintenance is necessary.

The Rexton G4 is a bit heavy on fuel, which is justified due to the plethora of features it provides.

The manufacturer says that the clutch box can get damaged as early as 300-400 km of driving, which is a risk to consider. 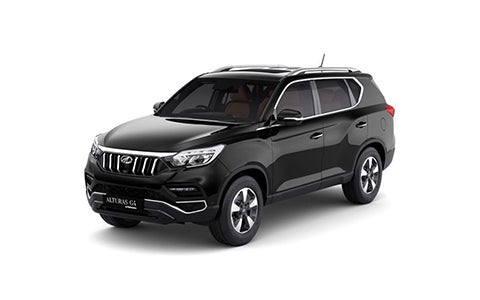 The gigantic SUV offers a sleek look and appeals to the target customers. The first Ssangyong product for the Indian market has performed undoubtedly well, and Mahindra’s reputation contributes to its glory. The trust the Indian market places in the brand made it easier for them to reach a broader audience and helped them gain popularity without much effort. This does not mean that the car is all talk and no show.

Mahindra built its reputation by delivering the most sophisticated and high-end technologies in its models, and the Mahindra Rexton lives up to the existing reputation. The SsangYong Rexton W retails for INR 19.75 lakh (ex-showroom, Delhi), which is quite a steal for the automatic basic version. The all-wheel drive with various additional accessories is available for an additional INR 4-5 lakhs.

The style and the comfort are worth the money, making the Mahindra Rexton a definite recommendation from our experts! The safety features offered by the Mahindra G4 Rexton surpass cars from other manufacturers in the same range. It seems that Mahindra put in a lot of effort to make sure that the model stands well on the customer expectations, which undoubtedly paid off well.