Mahindra and Mahindra first announced the TUV300 in August of 2015. In the same month, they launched its microsite as well. Mahindra TUV300 was launched officially on September 10, 2015, in Madhya Pradesh.

Designed by Mahindra’s Design Studio in Mumbai, the TUV300 is built on the same platform as the Mahindra Scorpio. Product engineering has been done at Mahindra Research Valley in Chennai.

The Mahindra TUV300 employs a lower-end version of the mHawk engine series used in the XUV500 and Scorpio. This engine has a smaller engine displacement. Hence, lower engine power and torque.

The Mahindra TUV300 comes in diesel fuel type variants only. This compact SUV claims to deliver an ARAI Mileage of 18.49 kmpl. The vehicle has a seating capacity of 7 and a fuel tank capacity of 60 litres.

One of the best SUV manufacturers in India, Mahindra is a name synonymous with quality and assurance. The Indian audience trusts Mahindra. The new addition to their SUV family, TUV300, delivers to that trust.

The latest variant of Mahindra TUV300, all set to be launched in September 2021, is similar in design to its previous models. However, there are some striking updates when it comes to features. The all-new LED DRLs come as an addition to its halogen headlamps. The new X-shaped metallic grey spare wheel cover and the stylish new clear-lens tail lamps also enhance its sporty look. The door shapes have changed slightly, but the tyres and alloy wheels are the same as previous models.

The Mahindra TUV300 has seven variants—T10, T10(O), T10(O) Dual Tone, T10 Dual Tone, T4 Plus, T6 Plus. All of them have manual gear systems. TUV300 comes in 7 different colours— Pearl White, Highway Red, Bold Black, Majestic Silver, Highway Red, Silver and Mystic Copper. Some of these colours only come in specific versions, though.

First up, the TUV300 is a compact SUV. Though solid and sturdy, the vehicle is just four metres long. You can conveniently drive it on crowded city roads as well, which adds to its versatility.

The overall drive quality is impressive. The car space is well optimized, with a seating capacity of seven. The interiors have a premium feel, which is something new from Mahindra and Mahindra.

It comes with Mahindra and Mahindra’s customer service. They give a warranty of 3 years, with an option to extend it. Their Roadside Assistance is also a good investment. They offer repair and maintenance services if your vehicle breaks down on the road.

The wheel placement of TUV300 lowers down the turning radius somewhat. So you can take much sharper turns without the fear of your car toppling.

The rugged design and compact size of this SUV empower it to go through off-road and even no-road terrains. You can drive it almost anywhere.

For a compact SUV in the 9-12 lakhs price range, the Mahindra TUV300 is quite feature-loaded and a sensible buy. 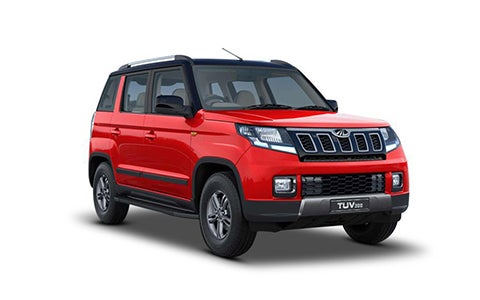 The Mahindra TUV300 has been in the Indian markets for a long time now. Several experts have reviewed this car time and again. There have been minor inconveniences in different variants of it over the years. Still, Mahindra has actively worked to eliminate them.

Overall, this car is considered a good investment if you are a family man looking for a compact SUV. You can easily seat three people at the back without anyone rubbing against one another. There is a lot of luggage space as well. Plus, its compact design makes it better suited than the bigger SUVs like Xylo or Scorpio on crowded city roads.

The visibility in this car is another striking feature. In addition to a larger glass area, it has high seating and a short dashboard. The edges are also square and well-defined. However, as discussed earlier, the rear vision is an issue. To solve it, though, Mahindra now provides a rearview camera, which shares its screen with the touch-controlled stereo.

The TUV300 has driver and passenger airbags in the top models. The interior has a premium feel, which is a new introduction to Mahindra vehicles in general.

All in all, it’s safe to say that the Mahindra TUV300 is one of the most feature-loaded cars you can have in this price range. It can compete with all its contemporaries, and it will only excel. However, an automatic transmission could have been a cherry on top. A petrol engine would also be a good addition since the Indian audience has its fair share of biases regarding fuel type.

What is the Seating capacity in Mahindra TUV 300?

The Mahindra TUV 300 comes with a seating capacity of seven. The seating configuration is (2+3+2) and if seven-passenger sits, then there is no space left for luggage. The jump seat is not suitable for a tall person as it is meant for kids.

Does the Mahindra TUV 300 have a sunroof?

What is the ARAI mileage of the Mahindra TUV 300?

What is the price of the base model of Mahindra TUV 300?

The price of the base model of the Mahindra TUV 300 T4 Plus is Rs.9.91 lakh and it is the on-road price. The actual price is Rs 8.43 lakh and it comes only with the diesel variant. It has body colour bumpers, ABS with EBD, driver and co-driver airbags.

What is the price of the top model of Mahindra TUV 300?

What are the various EMI options available for Mahindra TUV 300?

What is the Price of Mahindra TUV 300 Diesel?

What is the tyre size of Mahindra TUV 300?

The tyre pressure of a car is essential as it influences the safety of the vehicle as well as the user. The Mahindra TUV 300 comes with the tubeless radial tyre and the size of the tyre is 215/75 R15. Many different tyre models are available for the Mahindra TUV 300.

What is the kerb weight of the Mahindra TUV 300?

Specify the dimensions of Mahindra TUV 300?

What is the transmission type of Mahindra TUV 300?