Mahindra introduced the Verito Vibe compact sedan in the Indian market in 2013.

It was a slightly redesigned version of the Mahindra Verito sedan, and being a Sub-four meter, it enjoyed all the available tax concessions.

Though a great package, the Verito Vibe faced incredibly low demand in India because of its not so friendly and unfashionable design and steep pricing.

Consequently, the Verito Vibe had a short lifespan in India. Mahindra ended the production of the vehicle in 2016 itself. However, the car was officially discontinued in the year 2020.

The Verito Vibe and some other Mahindra models like the Xylo, Verito, and the NuvoSport were axed out of the lineup during the BS-VI transition phase.

The Mahindra Verito Vibe is offered with only one engine - a 1.5 litre (1461 cc) Renault sourced diesel engine that churns out 64.1 bhp of max power and 160 Nm of peak torque.

The Mahindra Verito Vibe only had a Diesel engine option.

In India, the Verito Vibe featured only a manual gearbox option.

The Verito Vibe is a compact sedan that Mahindra launched in 2013 to leverage the tax benefits on sub-four meter cars. The Verito Vibe is completely based on the Verito sedan - it shares the design, interior, as well as powertrain options. Ever since the vehicle's launch, Mahindra did not launch any facelift or next-gen updates of the Verito Vibe. Owing to the abysmal sales, Mahindra axed the Verito Vibe from its lineup of cars during the BS-VI transition phase in the year 2020.

Mahindra offered the Verito Vibe in a total of three variants in India - 1.5 DCI d2, 1.5 DCI d4, and 1.5 DCI d6. Buyers had the choice of eight colour options for the Verito Vibe - white, black, brown, silver, red, grey, and blue.

Space and practicality was the biggest USP of the Verito Vibe. With almost a mid-size sedan like wheelbase, the Mahindra Verito Vibe offered loads of space inside the cabin. Furthermore, the Verito Vibe came with a punchy 1.5-litre diesel engine that provided excellent low and mid-range performance. The Verito Vibe also came equipped with great features like electrically operated ORVMs, all-four door power windows, and safety features like ABS with EBD and driver-side airbags.

Rivals of the Mahindra Verito Vibe in the Indian market include the Maruti Suzuki Dzire and the Honda Amaze.

The Mahindra Verito Vibe has the best in class cabin space on offer, be it at the front or the rear.

The 1.5-litre DCI engine on the Verito Vibe has proven to be incredibly reliable over the years.

Mahindra claims fuel efficiency figures of almost 20.08 km/l for the Vibe, which is excellent for a 1.5-litre engine.

The Vibe makes for a great city driver, thanks to its naturally aspirated 1.5-litre diesel engine with no bottom end lag.

The Mahindra Vibe handles quite well, and it remains very stable at triple highway speeds.

The dual-tone interior colour and large glass area on the Vibe makes the cabin feel very spacious and airy.

Mahindra has done an unsatisfactory job with the styling of the Verito vibe. The boxy design language looks very outdated and lacks appeal.

The Verito Vibe quickly loses out against its competitors in terms of features. The car lacks essential features like high adjustability for the seats and steering wheel, steering mounted controls, Bluetooth connectivity, and passenger-side airbag.

The quality of materials used in the Vibe's cabin is simply not of the level of the rivals. Moreover, the design is extremely outdated too.

The dashboard on the Vibe is not very ergonomically designed; several controls are placed very low on the centre console, making it difficult for the driver to operate.

The Verito Vibe feels underpowered on open highways as the car struggles in the top end.

With the kind of interiors and features on offer, the Verito Vibe was priced on a slightly expensive spectrum, especially when compared to rivals like the Dzire and the Amaze, which undoubtedly offer better quality on the inside and more features.

When compared in terms of safety, the Verito falls slightly behind its rivals as it doesn't offer a passenger-side airbag even as an option, which others in the segment provided. 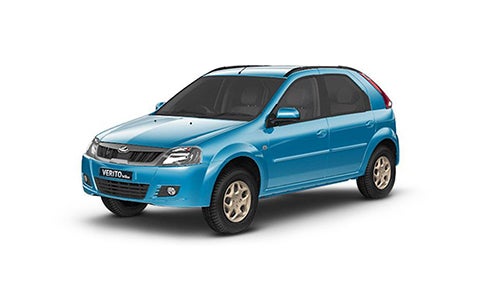 The Mahindra Verito Vibe is a sub-four meter compact sedan based on the Verito sedan. Despite being a sub-four-meter vehicle, the Vibe offered the best in class space both at the front as well as the rear, almost like a mid-sized sedan. Furthermore, the dual-tone interiors and large glass area make its cabin feel even more spacious. The 1.5-litre diesel engine on the Verito Vibe feels punchy right from the word go; it has absolutely no bottom end lag. The Vibe was a great handler, offered excellent ride quality and felt extremely stable on highways. However, the plain and boxy design, lacklustre cabin quality, lack of safety equipment, and not so competitive pricing decided the unfavourable fate of the Verito vibe.

The Verito Vibe stood above its competitors in multiple ways. Primarily, while its other sub-four meter rivals like the Dzire and Amaze struggled with the back seat space, the Verito Vibe was as spacious as a mid-size sedan. Moreover, unlike its competitors, whose turbo diesel engines had quite a lot of turbo lag initially, the Vibe offered a naturally aspirated engine with outstanding low-end performance.

The Vibe is exceptionally smooth and easy to drive. The naturally-aspirated motor gives good thrust right from the start, and that, when combined with the light steering wheel and easy clutch operation, makes the Vibe a great city car. The Verito Vibe has an ARAI claimed mileage of 20.8 km/l.

The Verito Vibe is an excellent buy if you are looking for a classy, comfortable, spacious and good to drive family sedan. The Vibe has proven incredibly reliable over the years, so buying a used one won’t cause concern.