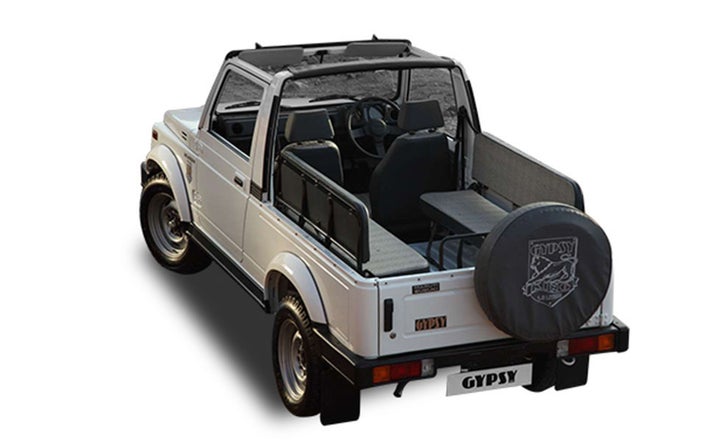 Maruti Gypsy (1985) was the second generation version of Suzuki’s Jimny (1970, Japan). The Indian Gypsy that initially came with a 1 L petrol + 4-speed transmission underwent an upgrade in the mid-1990s to be known as the Gypsy King. The newer models also featured a newly stylized front grille. The 4x4 drive configuration has been a standard for this car right from the archaic Jimny to the newer ones.

The Gypsy(s) launched in the market post-1990s come with a 1.3 L petrol engine that offers a smooth and slick performance. The 1.3 L engine offers 65 bhp along with a torque of about 103 nm. The brand also launched an MPFI (multi-point-fuel-injection) updated engine for the car capable of delivering up to 80 bhp.

The Gypsy comes with a manual five-speed transmission with a typical synchromesh in operation. The car also features a 4-wheel drive lever that provides configuration changes like 4 low, 4 high, and 2 high drive modes. The transmission feels a bit hard in terms of movement, and it takes a more significant amount of effort to shift gears.

The 2nd gen Jimny (Maruti Suzuki Gypsy as we know it) was discontinued in the year 2019 in India. The recently available models were known as Gypsy King, and the ones before it was known simply as Gypsy. Suzuki has already introduced the 4th gen Jimny in Japanese and European markets. It is expected to be launched in India by the year 2022.

If you have a penchant for iconic and legendary cars, Maruti Suzuki Gypsy is a phenomenal choice for you. This straightforward, no-nonsense car is the one that is majorly known for its brilliant off-roading abilities. The Gypsy was first launched in the year 1985, and there have been minimal changes in the original car ever since. The original version came with a 1 L petrol engine which was upgraded to a 1.3 L petrol engine in the mid-1990s. There have been really few changes in the car apart from this. The front grille has a new look in the facelift version, and Suzuki also started giving out options of soft top/ hard top cabins in about the past decade. The car doesn’t promise much when it comes to features and comfort. Its buyers know that it is intended purely for a powerful drive. The Gypsy comes with a 4x4 drive which makes it able to beat any kind of terrain and its lightweight structure enables it to achieve high revs easily when needed. The car has been discontinued since the year 2019 and is now primarily available in the second-hand market. The reason for stopping the Gypsy’s production was that its simple-unchanged design did not leave much scope for upgrading the car as per modern safety and emission standards. Back when it was on sale, the car’s price was about 7 lakh INR (on-road, Mumbai). Maruti Suzuki Gypsy’s competitors include cars like Force Gurkha, Mahindra Thar, etc. The Gypsy is arguably one of the most iconic SUVs of India since its launch about 40 years back.

The most significant advantage of Maruti Suzuki Gypsy over its rivals would be its straightforwardness. It is a no-nonsense car with its focus purely on performance. Apart from this, the brand offers excellent service availability all over India, with most of the parts available in small and large workshops.

The car has an archaic approach towards safety. Modern features like ABS and airbags are not present.

On the looks front, the Gypsy has a simple yet rustic look that is truly iconic. The rear-mounted spare wheel gives it an added sporty feel. The soft roof can be rolled away for an adventurous open-jeep experience. 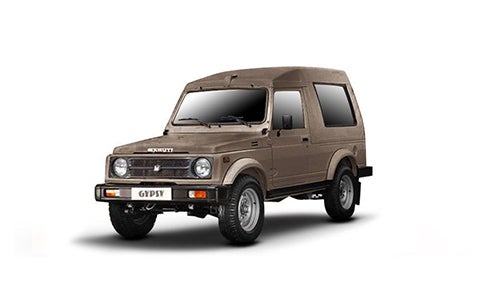 Maruti Suzuki Gypsy is an icon that has made a mark on the Indian roads (and off the roads). If you are a person who likes driving off-road, or if you live in hilly areas with hairpin bends and steep inclines, the Suzuki Gypsy is an excellent option for you. This car is so effective in its performance that it has become almost standard in the transport options of the Indian Defence Forces. The 4x4 drive on the 5-speed 1.3 L petrol engine can maintain high revs with great ease. This car’s easily affordable available service is an advantage over its rivals in the market. The Gypsy stands out in its simplistic no-frills approach, and it comes at a more affordable price. This legendary Indian SUV ensures that there is no road that you cannot chart. The car has been a constant top-performer in Indian Motorsports rally events from time to time. This lightweight SUV mixes performance and poise and is ideal as a straightforward, affordable SUV. The car is a bit low on modernistic features, but then this is not what it promises in the first place. Choose the Gypsy if your sole motive is to have a rewarding driving experience both on and off-road. It is punchy, it is powerful, and gets the job done. Choose the all-time classic Maruti Suzuki Gypsy and find yourself travelling back into time!