History- The largest carmaker in India, Maruti Suzuki, introduced the first-ever contemporary sedan in the Indian market. Suzuki was selling the same model in other countries as Swift/Cultus and Geo Metro in other countries. In India, the Maruti 1000 was launched in October 1990.

Engine Options Available- The characteristic engine had a capacity range of 1.3 litres to 1.6 litres. It was one of the most expensive car models in the 1990s. The 970cc engine had an output of 45 BHP, which was quite low for a car of 850kg.

Gearbox/Transmission- It came as a manual transmission car. In 1994, the Maruti 1000 was replaced by the Maruti Esteem, an upgraded version of the 1000 model. The Esteem came with a 1.3-litre engine with 65 HP power and 90N of torque. The second generation of Esteem had a higher horsepower of 85 with an EFI upgrade over the carburetor. The original gearbox had a 4-speed transmission upgraded to 5-speed transmission in Esteem.

The grey interiors included ample boot and trunk space, a glove box inside the cabin, generous knee and leg space, reclinable front seats, moquette seat covers, and powerful brakes. The interiors portrayed ergonomic design. The car had an FM radio option with a Sony music system that had a cassette player. The safety aspect of the car was the pre-tensioner seat belt.

With a mileage of 15 kmpl and low fuel consumption, the driving experience of Maruti 1000/Esteem was relatively smooth and easy to cruise.

One of the most aspired-for iconic cars in the Indian automobile industry, the Maruti 1000 was one of the most wanted cars of its time. It started the so-called sedan trend in the country and was poised as the luxury car of the 1990s, fit solely for the affluent. The demand for the car was so high that a company initiated a lottery system to prioritize a long list of buyers back then. The car was upgraded in 1994 and was named the Maruti Esteem. In 2000, the production of the Maruti 1000 model was officially discontinued. The Esteem model got a power upgrade with 65 HP.

The top feature of Maruti 1000 was its ample boot space and spaciousness. Three adults could easily be seated in the rear. The AC Vents were located on the doors with conducting ducts at the dash. Back in the 1990s, the car came with speakers at the back and front – things were unimaginable at that time. The car also had pre-tensioners as safety seat belts, which was another USP of the model.

The car came in two variants – standard and air-conditioned. Both the variants were of the petrol fuel type and had a manual transmission. The price of the standard model was approximately INR 3.83 lakh, while that of the air-conditioned model was INR 4.17 lakh. Between 1990 and 2000, when the car was a hero product, there were no close competitors. Much later, it was transformed into the Esteem, and in 2007 when the Esteem was discontinued, it was replaced by the Maruti Swift DZire.

A high-end luxurious car at a very nominal price.

The car is great with its driving dynamics.

One of the most significant advantages of the Maruti 1000 was that it could be customised to meet customer expectations. Hence, in the late nineties, the model was a top choice with motorsports enthusiasts because the model could be engineered into mods with an enhanced powertrain. These were cars that were engineered specifically for rally racing.

A versatile car that looked good and had some excellent features in-built.

Besides reasonable pricing, the car was very spacious with enough leg and knee space. The boot space was equally good for luggage and packing for weekend trips.

Exceptional climate control features with the side AC vents located on the door.

With dedicated speaker slots at the back and the front, an option to fit high-quality music systems like a Sony system with FM radio and a cigarette lighter, the car had features that were unimaginable in the 1990s.

The fuel consumption and maintenance costs were low, while the car was high on performance.

The most significant shortcoming was that the Maruti 1000 was a car meant for the elite. Priced at INR 3.83 lakh, it was out-of-reach for at least 99% of Indians.

Besides, the maneuverability suffered when the air-conditioning was switched on.

Beyond 80 kilometers per hour, the car provided very poor pick-up. 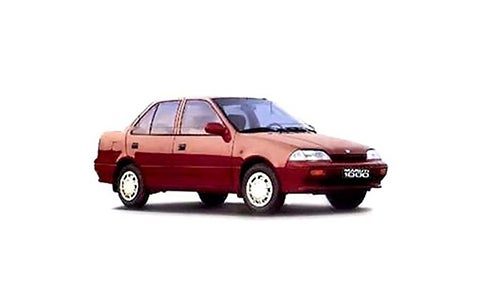 The invincible Maruti 1000, later upgraded as the Maruti Esteem, was not just the first sedan model for the Indian customer but a trend-setter. With a fantastic exterior, equally impressive interior, and enough personalizing opportunities, the car was an aspiration for the average middle-class Indian in the 1990s. Not to forget, it was a car to show off for the elite and the wealthy. Maruti 1000 had its pluses and minuses, but it did open the doors for the Indian automobile industry in many ways.

Besides being a sleek-looking car, the interiors took a lot from typical Japanese cars. Space was a big focus for the brand as it ensured decent boot space, leg and knee space, glove box, and trunk storage in the cabin. The front seats could be reclined; the brakes were strong, the engine was powerful, and pre-tensioner seat belts for safety. However, the car weighed a bit too much at 85 kgs for the engine to support. It was the 46 BHP power that failed the car, lagging in the pick-up when the air-conditioning was on.

The car, however, offered a smooth and easy ride to its passengers and was an aspirational car for many buyers. Till about 80 KMPH, the car was easy to manage, ride and manoeuver. The performance was incredible, with high fuel efficiency and low maintenance costs. However, beyond 80 KMPH, the car struggled to pick up speed even though most buyers chose the Maruti 1000/Esteem for its smooth performance on the road.