During its production, it was given an upgrade in 2009, and the facelift got features like ABS, updated emission rating, and exterior and interior upgrades. The facelift version also got a more powerful engine, with an output increase from 64 PS to 68 PS. The Estilo was discontinued in 2014 and was succeeded by the Maruti Celerio.

Estilo brought a newer and refreshed generation of the hatchback to the market other than the Alto and Santro. This mini car was affordable and convenient in terms of pricing, maintenance and everyday usability. It had an efficient engine to complement the need for heavy traffic driving. Although the design was basic, it provided for all the buyer's needs. Features like AC, heating and ample passenger space were among other benefits of the car.

The transmission of the Maruti Suzuki Estilo was a manual type with a 5-speed gearbox.

The latest model of the Maruti Estilo, launched in the year 2009, was a facelift version of the first-generation Estilo. Maruti offered a number of Estilo variants with different engine options, fuel options, safety and additional features. There were two engine options available for the Estilo: a 1061 cc engine and a 998 cc engine. The 998 cc engine was available with both petrol and CNG fuel options, but the 1062 cc engine was available only in petrol. There was no option for the transmission type, with only manual transmission on offer by the manufacturer. It offered two emission norms, BSIII and BSIV, apart from features like optional ABS and Sports variant.

The list of colour options was in plenty, as Maruti offered around ten shades for the exterior of the Estilo. The shades included colours like Bright Red, Dusky Brown, Sunlight Copper, Midnight Black, Silky Silver, and Ecru Beige. Maruti Estilo was a popular car and stood out from its rivals in terms of commendable mileage, a convenient turning radius and an affordable price tag. It also offered a number of variants to pick from, giving the buyers plenty of options. It was a convenient hatchback that offered easy everyday use along with a low maintenance cost.

The price of Maruti Estilo started at Rs.3.18 Lakh and went up to Rs 4.24 Lakh. It competed against models like Datsun GO, Maruti Alto, Hyundai Santro and Maruti Celerio.

The Maruti Estilo had a higher seating position, which offered a better view of the road than its rivals like the Alto, Santro, and WagonR.

The doors of the Estilo were bigger and opened wide enough to allow easy access to the seats for the passengers.

The interior of this model was ambient and well lit compared to its competitors.

The mileage of the car was commendable. It had a great fuel economy of 19 km/l in the city and an amazing 24 km/l average on the highway.

The Estilo was a stable car to drive on the highway even at high speeds like 120 km/h.

Due to its size and the higher seating position, it was easy to manoeuvre in congested traffic without much hassle.

The CNG option was great for city driving and economical fuel consumption.

The boot was ample in terms of space and could carry more luggage than other models like WagonR and Swift.

The second row was cramped and had congested legroom for the passengers.

The interiors had a cheap plastic feel which often made scratchy sounds.

It was good on straight roads but performed poorly around bends and corners at speeds.

The design was kind of boxy and did not appeal much in terms of aesthetics.

It also did not have a great resale value like other Maruti cars like the Alto and WagonR.

The gearbox was not smooth, and putting it in reverse often caused problems. 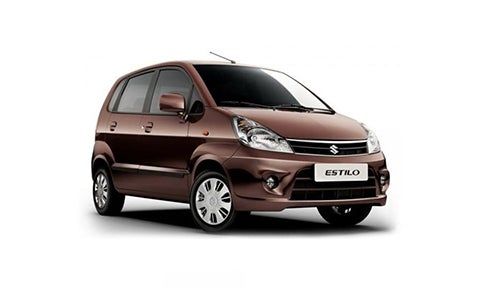 The Maruti Estilo was an affordable hatchback with plenty of basic features for everyday use. It was good in terms of mileage, as both its petrol and the CNG engine returned a good average. The Estilo also offered ABS with some of its variants, which was a good option among its competitors. It was a convenient vehicle to drive, with great agility and performance. The drive quality was smooth, and the body felt stable at lower speeds.

The cabin offered a good amount of space for passengers in the front and back. However, the rear seats were smaller in legroom and the overall width, but features like a movable headrest gave it better standards in terms of comfort. The interior of the Estilo was organised and offered a clean look. However, the plastic fittings in the interior lowered the quality feel of the cabin. The engine of this model was a good performer with 67 bhp of power and 90 Nm torque, offering ample driving power for city and highway roads.

Apart from the fact that it was a new generation hatchback at the time of its launch, it also offered its buyers the reliability of Maruti Suzuki. The after-sale maintenance, the service, availability of parts and easy repair options were the features that made the Estilo worth buying. Also, a low starting price point made it popular among other models in its segment. Maruti Estilo offered a fair deal in terms of pricing and features, as it also offered the trusted name and value of Maruti Suzuki.