Maruti Suzuki is the largest passenger car manufacturer in India. They have been manufacturing cars for all the Indian car enthusiasts and have been providing them with a top-notch product, every now and then. Maruti was founded back in 1982 in what is now known as Gurugram.

Estilo is power-packed with a 1.1L petrol engine with an engine capacity of 1061cc. This 4 cylinder engine with the help of a multi-point fuel injection system delivers maximum power and peak torque of 64 bhp @ 6200 rpm and 84 Nm @ 3500 rpm respectively.

The compact hatchback is available with only a petrol engine. There is no other engine option.

Estilo has a powerful 1061 cc engine that is equipped with a manual gearbox. There is no Auto transmission option.

The Vxi variant of Estilo comes with ABS (Anti-Braking System) and all the variants have adjustable headlights, fog lamps, wheel covers, and body-coloured bumpers.

Flaunting its jelly bean body, Zen Estilo with a powerful-in-its-segment engine ruled the compact hatchback segment for more than 15 years. It also has a manually adjustable rear-view mirror.

Maruti Suzuki Estilo which is also known as (Maruti Suzuki Zen Estilo) was an upgraded or next-generation Zen. This car was once a show stealer and even in today’s world, it works wonderfully for learners. Estilo replaced Zen and became one of the finest compact hatchbacks of its time.

Even today, the second-hand version of this car remains a go-to car for a lot of drivers owing to its maneuverability and handling, to say the least.

Positioned as an entry-level compact hatchback, Estilo strengthened the statement of tall boy design. It was offered by Maruti Suzuki with a petrol engine which means it had three variants like any other petrol car in their lineup. Starting from the lower trim to higher trims, you get Lx, Lxi, and Vxi.

The on-road price of various trims in Delhi range from 3.56 to 4.16 lacs respectively.

Rivals/Comparable car models of the Estillo are Hyundai i10, Hyundai i20, Chevrolet Beat, and Ford Figo.

Comes with an elegant design.

It is high on mileage

The major missing features of the car are the new age technologies and features. 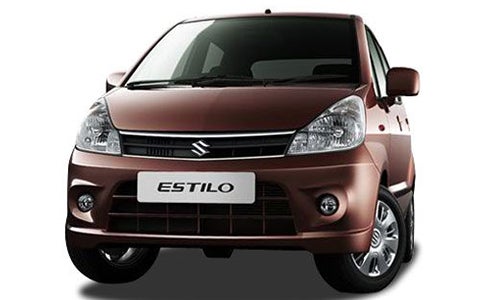 Maruti Suzuki Estilo offers a huge range of features and an overall comfortable driving experience. This makes this car worth buying. The good maneuverability of this car makes it easier for people to drive even in adverse driving conditions. The manual gearbox of Estilo works wonderfully with the engine. According to the experts, this model is worth buying.

Maruti Estilo has a very responsive engine and a compatible transmission unit. It comes with a 1.1L petrol engine with an engine capacity of 1061cc that delivers a peak torque and power of 64 bhp and 84 Nm.

Though you would wonder that there should have been a few more features and some new-age technologies but this car is from an era where it dominated the compact hatchback segment. It has been a wonderful car and competed with other cars for 15 years. It has a legacy behind its name.

The ideal buyer of this car will be a family man who wishes to roll with the family. It has a good mileage on the highway so those who travel interstate quite a lot can also buy this car. And office goers can also get this car because it is going to be an economical choice.