The car had a facelift in late 1999 with a revised infotainment system and a larger multi-functional screen; steering wheel controlling the multi-functional screen and radio; Tiptronic automatic transmission; redesigned bumpers; and completely new side skirts, among other things. Turn signals located in the wing mirrors were first introduced in 2001.

A "Sport Package" was available for the CLK 430, which was given the same exterior appearance as the more powerful CLK 55 AMG, as well as the same wheels and tires. It attained up to 0.83G of lateral acceleration and 66.5 mph on the slalom course.

It wasn't until 2002 that the CLK 55 AMG Cabriolet was released.

Because the gearbox in the V-12 S-class cars can handle the torque, the five-speed automatic transmission (722.6) was modified.

The last recorded price of the Mercedes-Benz CLK class was 85 lakh rupees.

Mercedes Benz is a class of its own. The luxury automobile brand produced a series of entry-level or mid-sized premium convertibles and coupes between 1997 and 2010, which came to be known as the CLK class. It was a mix of E-class and C-class as the styling and design were derived from the E-class, and the mechanical foundation was derived from the smaller C-class. The Mercedes-Benz CLK class comes right between CL-class and SLK-class, making it the CLK class. However, this model was discontinued in 2010 and returned to being the E-class.

CLK comes in seven different variants, and all the variants are automatic. The car competes with BMW Z4, Mercedes-Benz A-Class Limousine, Audi A4, and Jaguar XE. The Mercedes-Benz CLK-Class is a luxury tourer vehicle with low-slung sporty looks, a massive body, excellent polish, and a variety of powerful engines. The CLK-Class is a joy to drive, with plenty of gizmos and electrical gadgetry. Its lavish design is a clear statement of wealth and status. The CLK-Class, by the way, is built on the SLK-Class platform but with a shorter wheelbase. It's an automobile that can both look well and perform well.

The power is incredible and reminds us of the 1968 GTO, except that the handling is better, the engine is quieter, the car is faster, and upkeep is less expensive.

This vehicle is quite comfy, especially on long journeys, and it gets excellent fuel efficiency.

The styling is excellent. No one will be disappointed by the appearance, both inside and out.

The Mercedes-Benz CLK-Class is sleek in design. It is a blend of power and durability that should satisfy everyone, even the most dedicated drivers.

A sleek, prowling tiger replaced the rather pudgy first-generation CLK-Class.

The CLK appears to cost significantly more than its MSRP due to the front-end style identical to the SLs and its unique, wedge-like shape.

The CLK's delicate convertible top is not as suitable for all-season travel as models with foldable hardtops, but this does not reduce trunk room while the top is down.

The CLK is only available with automatic transmission and is a back-wheel drive. None of these vehicles has the best fuel efficiency in the class.

These cars can have a plethora of seemingly pointless options that exist solely to cause them to break down. The air suspension and automatic body control are the worst things here as they wear out and have to be replaced, and cars without them drive better. 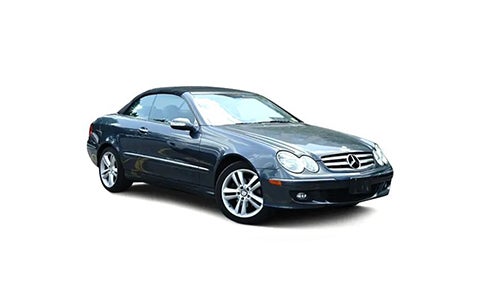 The CLK's cabin, for the most part, the CLK's cabin is fairly luxurious, with enough leather, wood, and exquisite chrome. Even so, some of the plastic trim on the top door panels appear to be of low quality for this class of vehicles. The car has automatic seatbelt "presenters," which provide the belts after the doors are closed, making it much easier for front-seat passengers to buckle up. Another benefit is the easy-entry system, which moves the front seats forward and makes it easier to get into the back. In addition, the back seats in the coupe fold fully flat, creating a flat cargo floor that enables lengthy goods to be carried within the vehicle.

For good top-up visibility, the convertible has big side windows and a relatively slender roof design, and the top can be swiftly dropped or raised by pushing a button on the key fob. Standard safety features include antilock disc brakes with a braking assist, stability control, active front head restraints, front-and-rear side curtain airbags (on coupes), and front side airbags. Convertibles come with additional rear side airbags, as well as standard pop-up roll bars behind the backseats that deploy in the event of a roll-over.

In terms of luxury and performance, it falls short of the more senior models in this renowned marque's inventory. The midsize CLK, which comes in coupe and convertible ("Cabriolet") versions, is more elegant than its sedan siblings, yet comfier than Mercedes' SL-Class and less expensive than the pricy CL-Class.