The Mercedes Benz SLK class was first introduced in 1996 and has been manufactured at the Mercedes facility in Bremen, Germany, until 2020. The initials "SLK" stood for sportlich (sporty), leicht (lightweight), and kurz (short) (short).

The SLK-Class was renamed to SLC-Class with the release of the facelift R172 in 2016, in compliance with Mercedes' updated nomenclature. Roadsters are given the initials "SL," followed by the model's position in the Mercedes-Benz hierarchy, with the letter "C" denoting the roadster's counterpart to the C-Class.

The R 170 was offered in the SLK 200 and SLK 230 K (turbocharged) versions when it first hit the market in 1996, with a turbo engine SLK 200 K version available for specific export markets. The facelifted model of the R 170 was introduced by Mercedes-Benz in 2000.

The Mercedes Benz SLK is available in 2 variants. All the variants are Automatic. Black, Polar White, Obsidian Black, Iridium Silver, Palladium Silver, Tenorite Grey, Fire opal, Cavansite Blue, Indium Grey, and Diamond Silver are among the ten colours available for the SLK [2011-2016]. Some of these colours, however, are only available in limited editions.

Mercedes Benz had come out with an executive class car in the year 1996. Mercedes Benz SLK class was discontinued in the year 2016 and is now out of production. At the time of its release, the Mercedes Benz SLk class was priced at 1.26 crore rupees (ex-showroom, Delhi). The car is slick and stylish and does not have a bounty exterior. It looks quite simple but is aristocratic at the same time. The SLK class was available in 2 variants and all the versions were automatic. Other competitor cars with the same features and in the same range are BMW XM3, Land Rover Discovery, Audi RS5, Jaguar F5, and many others.

The roadster is powered by a 5.5-liter V8 engine that produces 421bhp and 540 Nm of peak torque. The engine is connected to a seven-speed AMG SPEEDSHIFT 7G-TRONIC PLUS automatic transmission that sends power to the vehicle's rear wheels. This type accelerates from a start to 100 mph in 4.6 seconds and has a top speed of 250 kmph that is electronically regulated.

It comes with AMG Sports suspension, torque vectoring brakes, and AMG Direct-steer. The car also boasts of an AMG body style with distinctive 55 AMG front and rear aprons and side skirts. The Mercedes Benz SLK has an AMG high-performance, internally ventilated and perforated disc brakes, AMG sports suspension, COMAND online with 6 DVD changers with HARMON KARDON surround sound, ECO Stop-start function, and many other features which we will read about in the upcoming sections.

This vehicle offers a luxurious seating configuration and an ultra-modern interior design.

The performance of the 3.5L petrol engine, with its compelling power and torque output, is the most crucial attribute.

This automobile is far more attractive than other SKL Class models, and its comfortability features are comparable to those of other cars in this market.

The AMG variant has a pleasing appearance, fast handling, and a well-organised gearbox. The seating is luxurious, and there is plenty of cargo capacity, which is a benefit.

The basic braking system is included in the SLK variants. When the driver abruptly lifts off the accelerator, the brakes immediately set the pads.

When turning and navigating in particular scenarios, the ESP is meant to monitor driving and motion stability. Oversteering, tire spins, and understeering are all detected by the system.

Despite its nice furnishings, this vehicle only has seats for two passengers.

Its pricing is also significantly more than that of other automobiles in the same segment.

This vehicle lacks a thermocouple air conditioning system, which may cause discomfort to the occupants.

In this sedan, the COMMAND Online system might be included as a standard feature.

The sunroof can get breaky and make noise at times.

Large suitcases and totes cannot be accommodated due to a lack of luggage space. The trunk area is limited, making it difficult to transport heavy or numerous objects. 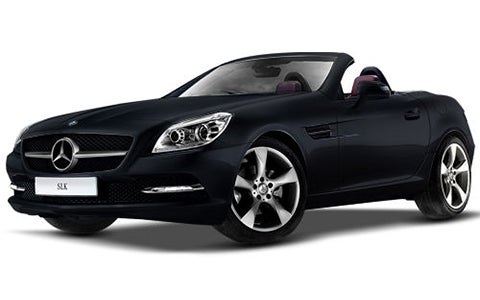 According to experts who have driven and ridden this car, they are pretty much direct about their opinion. Experts have opined that the car is a joyride when only two people travel without much luggage and do not have to worry about covering a distance. It might not be quick like other AMGs which give a lot more speed, but it's still a good drive.

The Mercedes Benz SLK does not look aggressive, it rather looks cuter from the outside. They boast a shiny exterior and the front grille is larger than the previous generations. The silhouette of the car appears disproportionate when the roof is closed, but once it's opened it's back to normal.

The interior is classy and luxurious but there is not much. It is only made for two people thereby the leg space is not adequate for more than two. The car is not well-suited for family vacations, especially to a far away place, because of this space crunch. The chairs are soft and supportive in the back and on the sides. It simply wraps itself around you like any other sports car. There is hardly enough room for your stuff when the rooftop is lowered into the boot.

The driving is very smooth compared to the different variants of the same type of car. It is not jittery or bumpy and provides a good riding experience both for the driver and the passengers.

Overall, this car was one of the coolest cars to be produced by Mercedes Benz and is surely being missed ever since it has gone out of production.