Mini released the redesigned Countryman in India on March 4, 2021, marking the model's first modified model. The Cooper S and Cooper S JCW Inspired models are the Cooper S. The Cooper S is the more affordable of the two. The new Countryman, manufactured at the BMW plant in Chennai, is available in six different dual-tone colour schemes.

Only one engine is available for the new Mini Countryman, a 2.0-litre, four-cylinder petrol unit that generates 189 horsepower and 280 Newton-metres of torque. A seven-speed DCT transmission is standard, but a seven-speed DCT sports transmission is available with the particular edition version of the vehicle. There are also two other driving modes to choose from, including Sport and Green.

A 6.5-inch touchscreen information and entertainment system, an armrest in the centre of the second row, and dual-zone temperature control are all standard inside the Mini Countryman. Wireless charging, a heads-up display, and power-adjustable back seats are among the extras available on the JCW model.

Priced between Rs 39.50 lakh and Rs 43.40 lakh, it is a mid-range vehicle (ex-showroom). Cooper S and Cooper S JCW Inspired are the two Countryman models currently on the market, both offered by Mini. A total of five people can be accommodated in the compact SUV. It is now possible to order a Mini Countryman with a 7-speed dual-clutch gearbox rather than an 8-speed automatic transmission. After the transformation, it completes the 0-100kmph sprint in 7.5 seconds. The hefty steering wheel and beautifully crafted air vents are examples of the high level of craftsmanship.

Aside from that, the vehicle offers two alternative driving modes: Sport and Green. A motorised tailgate, a panoramic glass roof, and a memory function for the driver's seat are just a few of the features. It comes with an 8.8-inch touchscreen information and entertainment system with Bluetooth Apple CarPlay. An anti-lock braking system with cornering brake control, brake assist, and a collision sensor are all included to increase overall safety. From a performance standpoint, the Mercedes-Benz GLA 2021, the Audi Q3 2021, and the BMW X1 2021 all compete against the Countryman. The suspension is set up for a sporty drive rather than something meant for everyday driving. Despite the additional weight and the longer wheelbase than the bare Cooper chassis, the turn-in is fast and has little body roll. A Mini Absolute Value package, which includes the new Countryman, was also available until the end of June in 2021.

The new Mini Countryman went on sale in India on March 4, 2021. The Cooper S and Cooper S JCW Inspired models are the two variations of the Cooper S. Only one engine is available for the new Countryman, which is a 2.0-litre, four-cylinder petrol unit.

The Countryman is now only available in Cooper S trim. This means you'll receive a two-litre turbocharged petrol engine with direct injection.

All aspects of the vehicle, from the suspension setup to the compliance and steering response, are predictable in this JCW-inspired variant.

The Countryman's interior is very user-friendly and entertaining to use. The infotainment system has an 8.8-inch display and multiple driving modes. High-end Harman Kardon music system, all-LED headlights, dual sunroof, and leather upholstery are included.

The infotainment screen is positioned right in the centre of the dashboard. Leather upholstery and high-gloss plastics are in keeping with the vehicle's high-end status.

The Countryman's suspension system has more to offer than any Mini with two fewer doors, and the ride quality is more compliant even though it is stiffly sprung.

Backseat passengers have plenty of space. Sadly, the seat cushioning is extremely hard and uncomfortable. Overall, if you consider buying a Countryman to carry four people, you should reconsider.

Due to blind spots, drivers must be mindful of their surroundings while driving.

Apple CarPlay is only available on the MINI Countryman. This means only iPhone owners will be able to sync their applications.

The infotainment screen is slim and long, yet it seems smaller than the displays in other 2021 cars. 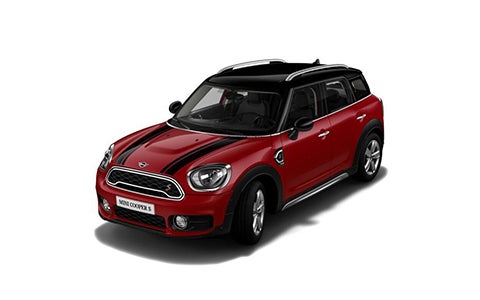 After discontinuing the diesel model in India, Mini is only offering the Countryman in Cooper S trim. The 2-litre turbo petrol engine produces 192 horsepower and 280 Nm of torque. It also has a throaty exhaust noise that only improves as the rpm rises. Even though John Cooper's Works influence this engine, it lacks a certain amount of theatricality in terms of loudness. The engine pulls strongly after 2,500 r.p.m, and the Countryman accelerates consistently and with a high degree of tenacity.

The new 7-speed dual-clutch automatic transmission for the 2021 Countryman is very smooth and engaging in all situations. There is no neck-snapping on-boost surge but rather a steady freight-train-like pull. The engine reaches 0 to 100 kilometres per hour in 7.84 seconds. The Countryman isn't the kind to fiercely assault the twisties but rather cruise about them with grace and comfort. Despite the more weight and the longer wheelbase than a Cooper, the turn-in is swift, and there is little body roll on the highway.

The suspension has more give than any other Mini with two fewer doors, and as a consequence, the ride quality is more agreeable. However, you will still be able to feel and hear the majority of road imperfections, as well as the occasional pothole. There is a lot of character in this cabin, which retains that retro charm. The 8.8-inch infotainment screen is slap-bang in the middle of the dash. Leather upholstery and high-gloss plastics create a luxury feel for this vehicle.