The Wraith indisputably looks a Rolls-Royce's product while being alluringly distinctive. The cabin is enormous, and the Wraith's well-heeled passengers will be unconcerned about a lack of space. Interiors are handcrafted to perfection, and the sky is the limit when it comes to personalisation.

The Wraith is built to travel long distances with minimal effort. The 6.6-litre twin-turbo petrol V-12 engine has an endless supply of power, and performance is sportscar-like if you choose to press the throttle hard. The Wraith is a large and hefty vehicle. Its lineup includes a 'standard' coupe and a racier version - Badge: Black.

First revealed at the 2013 Geneva Motor Show in March this year, British luxury carmaker Rolls Royce launched the Wraith in India on August 19, 2013. It is a door coupe derivation of the Rolls Royce Ghost. Apart from the engine upgrades, the Wraith has a shorter wheelbase, enhanced brakes, and a revised suspension setup to handle the increased power. While the Wraith's suspension has been altered to improve road agility, expect it to be just as comfortable to ride in as the Ghost.

The high-performance Black Badge versions of the Wraith coupe were unveiled by Rolls-Royce in 2017. The Black Badge automobiles give the highest level of performance the marque has ever produced. Certain aspects of the car, right from the black-finished front grille to the wheels, appeal to specific car buyers or car fanatics.

A ZF 8HP90 8-speed automatic transmission handles shifting duties, and rear-wheel drive is standard. According to Rolls-Royce, this 2.4 tonnes kg car can hit 100 kmph in just 4.6 seconds and reach an electronically limited top speed of 250 kmph.

The Wraith is a gentleman's GT, according to Rolls-Royce. The automaker also calls Wraith the most powerful and athletic Rolls-Royce yet. A turbocharged 6.6-litre V12 delivers 624bhp to the rear wheels, which is 10% more than the new Phantom and Cullinan.

As far as athleticism is concerned, well, Rolls-Royce has been holding the mastery of crafting weighty, comfortable automobiles that are meant to soothe rather than excite. Since the Wraith is based on the Ghost limo, it lacks sports chassis at its heart, although rear axle has been extended and wheelbase has now been trimmed.

The Wraith was unveiled in Geneva, Switzerland, at the 2013 Geneva Motor Show. The model hasn't undergone any significant revisions, though Rolls Rolls-Royce did launch the Wraith Black Badge a few years back.

The Rolls-Royce Wraith is available at a price range of Rs 6.22 crore to Rs 7.21 crore (ex-showroom). The automobile competes with other luxury GT cars in the Indian market, such as the Bentley Continental GT.

The interiors, like that of any Rolls-Royce, are luxurious, with excellent materials used on all surfaces, knobs, switches, and lever. Finely grained leather, tiny embedded LEDs on the headliner that simulates a starlit sky, and real wood and metal, it has it all.

The ride is exceptionally supple. The vehicle just absorbs all the road imperfections with ease.

Gear shifts are entirely seamless, and because the sat-nav system is linked to the transmission, it can read the road ahead of you to eliminate unnecessary shifts and keep you in the proper gear at all times.

In a straight line, the Wraith is so quick that it will even put a Porsche Cayman to shame.

It misses some driver-assistance tech.

In terms of technology, the Wraith has fallen behind the new Phantom, Cullinan, and other premium automobile rivals and is tangibly a generation behind them.

Not as athletic as you may expect.

Though the Wraith is never uncomfortable, it doesn't ride quite as serenely as you might expect.

The squishy brake pedal and inconsistently weighted steering place a strong barrier between you and any pleasure.

The Wraith's engine remains ghostly silent at 120 kmph, but its frameless side windows generate an uncomfortable amount of wind noise on the highway. 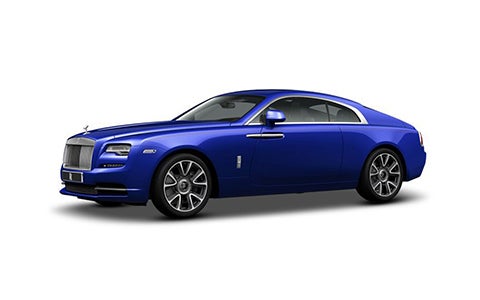 Rolls-Royce is known for producing magnificent automobiles with a sense of grandeur and sophistication. The Wraith, a luxury coupe based on the automaker's Ghost sedan, embodies this spirit perfectly. This grand tourer has rear-hinged doors, and the cabin may be altered in an almost infinite number of ways. The Wraith's cabin is a haven of unfettered opulence, boasting painstaking craftsmanship and the highest-quality materials available. Its V-12 engine produces a lot of power, and the car's satin-smooth handling protects the passengers from the roughness of the road. The Rolls-Royce Wraith is, unsurprisingly, on the more expensive side of the market, with prices starting at Rs 6.22 crore.

The V12 engine starts up so smoothly and silently that you won't realise it. When you rest your right foot in the shag pile carpet, though, the Wraith takes on a new personality; the engine roars loudly and sends you flying towards the horizon at a breakneck speed. However, when you approach a turn, you will realise this 2.4-tonne behemoth is not a sports vehicle. When you move the wheel, a long wait occurs before the Wraith's massive bonnet begins to point in the direction you want it to, and the rest of the car hesitantly follows. Potential suitors aren't likely to be bothered by this because they're far more likely to effortlessly utilise the car to cross states. However, keep in mind that the Wraith does not ride as peacefully as you may anticipate. It's never uncomfortable, but it fidgets more than we'd like because of tiny flaws.

A fast coupe unlike any other on the earth; one-of-a-kind and simple to fall in love with. If you take Rolls-Royce's at its value, anticipating a sports car from the Wraith, you'll be disappointed. Expect a somewhat sharpened Rolls, but you'll be rewarded with a seductive automobile that never fails to feel unique.