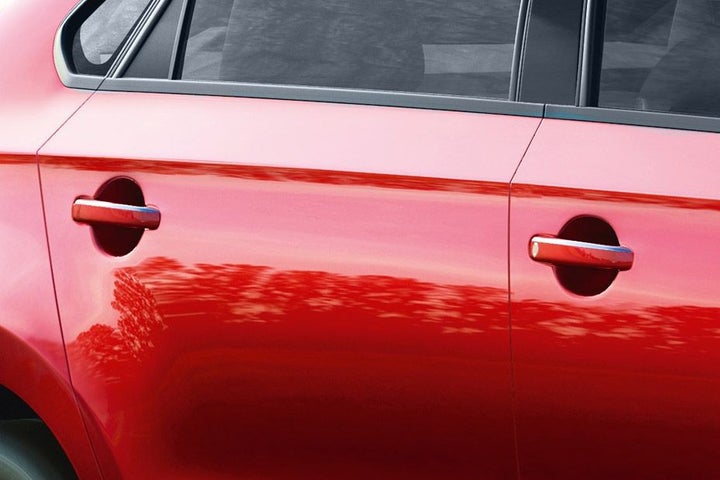 Škoda released its sedan, Rapid, in India in 2011. It had a lot to offer in terms of features, safety, etc. The affordable sedan came with climate control, a remote-operated boot, a rear armrest, height-adjustable front seatbelts, lumbar seat support, keyless entry, and other features.

Rapid received a bit of a makeover later in 2017, which resulted in the launch of an all-new facelifted version of Rapid. It was later discontinued, but Škoda launched Slavia, a new mid-sized class designed to replace Rapid in the Indian market and satisfy the same needs.

Rapid had many variants, a few of which are 1.0 TSI Rider Petrol, 1.0 TSI Ambition, i.e. the most selling variant, 1.0 TSI Matte Edition, Monte Carlo, etc. These models shared the same engine, which produced 108.62 bhp and a max torque of 175 Nm. It was available in both Automatic and Manual transmission gearboxes.

Rapid was available in both petrol and diesel. The color options it had were Carbon Steel, Toffee Brown, Flash Red, Brilliant Silver, and Lapiz Blue. Rapid's Matte Edition was the very last batch before the Czech automaker decided to stop producing them.

The Škoda Rapid was one of the most loved sedans in India. Indians loved Rapid as it was one of the best options available in the market. Despite being a budget sedan, it had top-class build quality and safety features like Airbags, ABS, and rear parking sensors. Škoda’s German Technology has always been on point. Rapid was first introduced in India in 2011 and designed to compete with other midsize sedan segments like Suzuki Ciaz, Honda City, Volkswagen Vento, Hyundai Verna, etc. Škoda ceased the production of Rapid, which was later replaced with Škoda’s new midsize sedan, Slavia.

Rapid offered many features, such as keyless entry, power windows, adjustable telescoping steering wheel, rear center armrest, cup holders at the front and rear, parking sensors, cruise control, and many more. With any car from Škoda, be it a sedan or an SUV, comes top-class quality and safety. As safety has always been a major concern, Škoda’s cars offer top-class safety features. Rapid was equipped with more features in comparison to its competitors, allowing it to display the best attributes, surpassing other cars.

Škoda offered Rapid in many variants, relatively in petrol and diesel. The best-selling variant of Rapid was the one with a 3-cylinder 1.0 TSI Petrol engine. It produced 108.62 bhp at 5000-5500 rpm and 175 Nm of torque at 1750-4000 rpm. It retained direct injection with 6-speed automatic and manual options. With 460 liters of boot space, Rapid was a good choice. 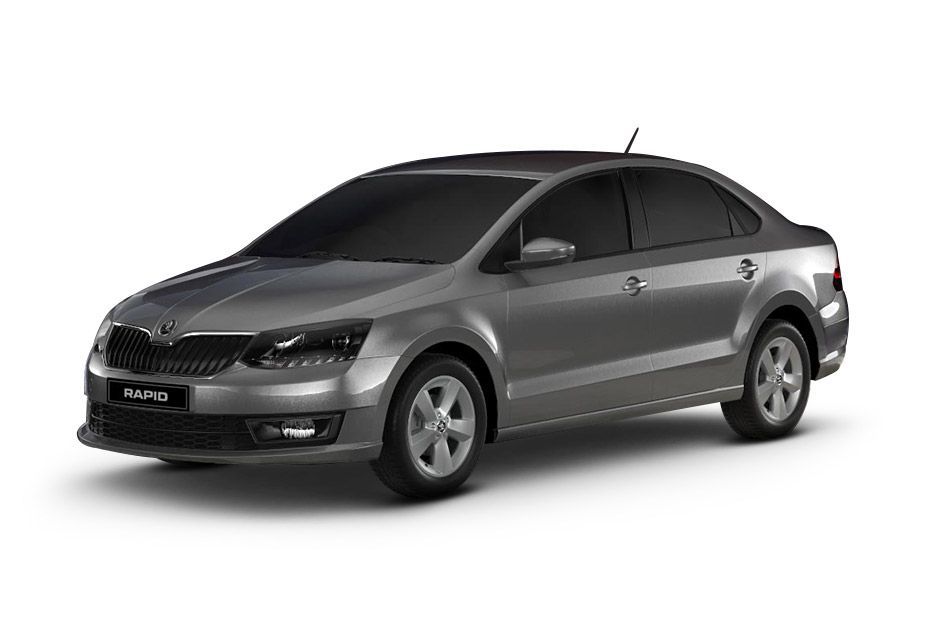 Safety - Safety has always been a concern, and Škoda's German Engineering is well-known for its build quality and safety. Rapid has a 5-star Euro NCAP safety rating, making it one of the safest automobiles in the market.

Build quality of the sedan - One benefit of Škoda’s every car is that each car the company has released comes with a great build quality that ensures top-class safety with a 5-star rating.

Interior - Coming to the interior of Rapid, Škoda has done a great job by providing a flat-bottom steering wheel with its traditional 3-spoke design in the facelift variant. The interior looks pretty neat and appealing.

Comfortable seats - Škoda has done a great job when it comes to the seats of Rapid as they are designed for total comfort. The armrests at the center console and the rear make it even more delightful.

Performance - One of the key reasons why Rapid was the most popular car among Indians was its performance. Its 1.0 turbo-diesel and 1.5 turbo-diesel were the most loved variants since the old Rapid was launched back in 2011. The sedan was packed with power and had great handling.

Outdated look - The rapid was almost identical to Vento and even after facelifting the sedan, it persisted the same old ergonomics of Rapid.

Stiff suspension - While driving at a slower speed, the ride got a little bumpy. 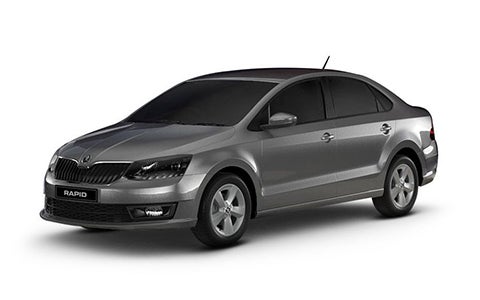 As you may be aware, the design and manufacturing of all Škoda Rapid variants have been terminated, and the all-new mid-sized segment, Slavia, has taken its place. Yet, there’s limited stock available. So, if you’re looking for a budget sedan that has many features, ample boot storage, 5-star safety rating, nice handling, good performance, and many more, you can consider Škoda Rapid as one of your options as the sedan is power-packed and loaded with lots of features besides being budget-friendly. There’s a limited amount of stock for Rapid’s Matte Edition, so if you’re looking for a unique color option, you can go for the Matte Edition.

As the manufacturing of Škoda Rapid comes to an end, Škoda's biggest concern will be if its new segment Slavia can meet the needs of the Indian market that Rapid formerly served. When it comes to Škoda Rapid's rivals — Honda City, Hyundai Verna, Suzuki Ciaz, and Volkswagen Vento — all outperform Rapid. As Rapid was offered at a comparatively lower price than its rivals, Rapid would have been a great deal.

No doubt Rapid was the best in segment sedan. The sedan didn’t have many flaws, but the only thing that could’ve been better was its suspensions. Its suspensions were a bit stiff, which distorted the driving experience a little. Škoda should’ve given better suspension to the sedan and also should’ve updated its appearance.

How many colours are available in Skoda Rapid?

Does Skoda Rapid have safety airbags?

Yes, the Skoda Rapid have safety airbags and it comes with dual SRS airbags in the top-end variants. The Mid variants come with only the driver side airbag. Now it is much safer than before due to its dual SRS airbags.

What are the safety features in Skoda Rapid?

It comes with an Anti-Lock Braking System, central locking, power door locks and child safety locks. Airbags are present for both driver and passenger for their safety. The car comes with a day and night rearview mirror and also with a passenger-side rearview mirror. The seat belts are present with seat belt warning. Xenon and automatic headlamps for a clear view while driving at night. It also comes with side and front impact beams, engine immobilizer, crash sensor, centrally mounted fuel tank, rear camera and anti-theft device.

The new Skoda Rapid's overall structure has few changes. The significant changes are under the bonnet and the new Skoda Rapid has a 1.6-litre petrol engine and produces a maximum power of 104bph and peak torque of 153Nm and the diesel variant with a 1.5-litre diesel engine which produces a maximum power of 108bhp and peak torque of 250Nm. The old Skoda Rapid priced in the range of Rs 7.94 lakh to Rs 12.19 lakh and the new one costs Rs.8.27 lakh to Rs.12.67 lakh. The new model comes with a length of 4,413mm, the width of 1,699mm, the height of 1,466mm and wheelbase of 2,552mm while the old variant with a length of 4,386mm and with the same width, height and wheelbase.

What are the variants of Skoda Rapid?

How is the performance of Skoda Rapid?

What is the top speed of Skoda Rapid?

The top speed of the Skoda Rapid is 170-185kmhr without any vibrations or feel of wobbling. The car seems very stable at its top speed as well.

What is the acceleration of Skoda Rapid?

The acceleration of the Skoda Rapid is quite good. It accelerates from 0 to 100kmph speed barrier within 10-12 seconds and it gives a powerful performance.

What is the ARAI mileage of the Skoda Rapid?

Yes, the Skoda Rapid is available through CSD canteen and one can purchase it at subsidised rates.

What is the price of Skoda Rapid in India?

What is the lowest price of Skoda Rapid in India?

What is the waiting period of Skoda Rapid in India?

The waiting period for the Skoda Rapid is probably one week. It also depends on certain factors like the city, colour, trim, dealer etc.

What is the service and maintenance cost of Skoda Rapid?

The approximate service and maintenance cost of the Skoda Rapid for 6 years is Rs 59,307 and the first service is free of cost after a distance of 10,000 km.

What is the boot space of Skoda Rapid?

The Skoda Rapid comes with a boot space of 460 litres. The boot space is quite spacious for a good amount of luggage.

What engine oil is best for my Skoda Rapid?

What is the mileage of Skoda Rapid?

Is Skoda Rapid available in diesel version in India?

Yes, the Skoda Rapid is available in diesel version in India. It comes with 9 Diesel variants, out of which four comes with automatic and five with manual variants.

What is the tyre pressure for Skoda Rapid?

The tyre pressure for the Skoda Rapid is between 32-36 PSI and the size of the tyre is 185/60 R15. The 36 PSI gives better fuel efficiency and 32 PSI offers a more comfortable and smoother ride.