The car is equipped with a 2.0L Kryotec diesel engine which makes 168bhp and 350 Nm of torque.

It is included with a 6-speed manual and automatic transmission type. There is no AWD version, but to compensate for that, they have a unique ESP system from which you can select: normal, wet, and rough.

The Harrier is a beast with a pair of low-placed headlamps and high-placed DRLs, considering recent trends.

The character of the Harrier is defined by flared arches, a sloping roof, and a floating effect on the D-pillar.

The Tata Harrier comes in 6 different variants- XE, XM, XT, XT+, XZ, and XZ+. The XE is the base model, XZ+ is the most selling one, the top diesel model is XZA+ Dark, and the top automatic model is XZA Dark.

Tata has launched new prices of Harrier's new five-seat SUV (Rs 12.69-16.25 lakh). This segment has three rivals: Kia Seltos at the lower end, and Mahindra XUV500 and Jeep Compass at the higher side.

Tata Motors initially introduced Harrier in India in January 2019. The first variant had a diesel engine with a manual transmission; then, the automatic gearbox was later introduced in February 2020.

The Harrier is equipped with a single engine-gearbox combination. In this case, the Fiat-sourced Powertrain combo wins by the Harrier (140hp/350Nm) than the Compass (173hp/350 Nm). Mahindra has the most significant engine, so higher torque wins, and the Creta has the smallest engine compared to others. Kia has a torque of 144 Nm @ 4500 rpm.

Harrier is bigger than Creta, 4598 mm is the most prolonged, and Creta is the shortest at 4270mm; in the case of wheelbase and width, in this case, too Harrier wins this round by 2741mm and 1894mm.

When it comes to the features section, every car is outmatching another car in its own unique way. All of the cars have 6 airbags in total. Safety on the road is also essential, so traction control is provided to Tata Harrier, Compass and XUV 500. This feature is not offered to Creta and Seltos. The touch screen is biggest in Seltos (10), Tata Harrier (8.8), followed by Compass (8.4), and then Creta and XUV (7). Navigation is present in every car except in Compass. Sunroof and automatic climate control are also provided for all.

Harrier is a mixture of three other models, ie. The engine of fiat, the architecture of the Land Rover, and finally, the design of Tata motors. This beast is named after a mighty bird of prey, and it began somewhat around 2015. If you remember that Tata Motors displays the H5X concept, so Tata Harrier is based on that same concept. Based on the D8 Land Rover design, 1 million pieces are sold globally.

If you are to travel anywhere, you may not need to worry about the amount of luggage you have as it is so much spacious inside; also, you get a small cubby space near the gear lever with a charger slot and cup holders. This car can hold 2-3 bigger suitcases and some soft cases too.

The cabin is also spacious, so if you are tall, there would be no need to adjust; you can easily fit inside.

It has a potent motor to ensure a smooth ride too.

It has a total of 6 airbags.

In some places, it feels like the finish quality is slightly compromised, as the rough cuts on the door pads around the window. But now, the quality of the new models is much better than the previous ones.

The screen size is less, and it sometimes becomes a challenge if you want to change or search for anything, so it would be much better if this car had a slightly bigger screen.

It may get a little bit rough while parking due to heavy steering.

Sometimes the diesel engine gets loud at 3500 rpm.

There is no petrol variant. 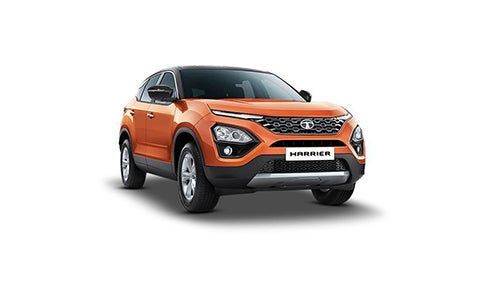 What dampens the Harrier experience lies in the quality, aesthetics, and small areas of the cabin. It might be finicky, but it could also have something to do with the adjustable front seat belts and the infotainment screen, which could have been larger, higher resolution, and faster responding.

But you'll love the Harrier for its massive street presence, spacious and comfortable character, powerful and authoritative dynamics, and some extra bragging features (see panoramic sunroof). While this top-of-the-line XZA + costs around 25 lakh OTR Mumbai, it is much cheaper than the Compass but a few lakhs more than the Seltos and Creta.

Overall this car is a mini beast. An investment in Tata Harrier would not be in vain.