Indica, which was known as the most modern car designed by an Indian company, was introduced on December 30, 1986.

However, soon after its release, the car faced backlash from many customers. The criticism was mainly due to Indica’s inability to deliver gas mileage and horsepower as promised.

The car was later re-engineered by the company to respond to customer complaints and relaunched as the Indica V2.

The car was updated once more in 2008 with the Indica V2 Xtra Petrol.

It was not until 2011 that the Indica eV2 made its way into every Indian household. During the latter half of March in 2011, Indica eV2 was offered to the public by Tata Motors.

The eV2 model was finally discontinued in April 2018.

The Indica eV2 had a 1.4-litre CR4 turbocharged diesel engine. It had features like Clutch-to-Start and Auto-Drive Assist.

The engine, which had common rail diesel injection, made about 140 Nm and 70 Bhp.

Besides this, eV2 had a petrol Engine, two diesel engines, and a CNG Engine on offer.

Tata Indica eV2 ran both on petrol and diesel.

It provided a company-claimed mileage of 16.84 to 25.0 kilometres per litre, depending on the type of fuel.

The car had a five-speed gearbox and was sold with manual transmission.

Tata Indica eV2 was last updated in 2012. At this time, the design and features of the car were modified. It was launched at a reduced price. The overall reduction of the price was estimated to be Rs 23,000. The car was developed indigenously to pave the way for more advanced Tata Motors cars. Besides this, the company also offered a warranty of 75,000kms or 24 months, whichever was earlier. Though the model’s production came to a halt in April 2018, the car parts are still available in the market because of the large number of eV2 on the road.

Customers could purchase the car in three different shadow beige colours. The options available were mint white, sea blue, and jet silver. Some of these colours, however, were available only in specific versions.

Tata Indica eV2 was one of the best cars compared to other hatchbacks for the middle-class.

The cabins that could include five occupants were spacious, which made them perfect for dinner trips.

The fuel-efficient engine, which acted as a cherry on the cake, could deliver excellent mileage numbers and keep the wallet happy.

When driven at low speed, the car felt comfortable, which means that the vehicle did not get put off by an old pothole.

It offered good acceleration and pickup.

With a new suspension system and a powerful engine, it offered value for money.

Many car enthusiasts praised the model for its low maintenance costs.

The clutch-to start feature reduced the risk of cranking.

Some customers had voiced their disappointment because of the monotonous external appearance of the car.

Many people had also complained about an underpowered engine when the vehicle was used on the highway. As a result, the car could only be used for intra-city travel.

No anti-lock braking system was available in the car.

The absence of airbags as an option made the consumers question the safety features of Tata Indica eV2.

The interior features were basic and were unable to satisfy the needs of the middle-class passengers. The use of below-average plastic also became the reason for criticism.

The model was also lambasted for terrifying engine noise that disturbed the passengers. 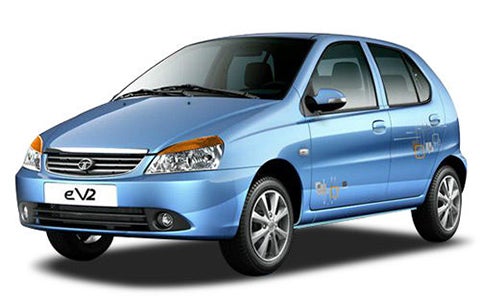 The Tata Indica eV2 quickly made its way to Indian households because of its fuel-efficiency feature. Certified by the ARAI (Automotive Research Association of India), the car offered a mileage of 25 kilometres per litre for the CR4 diesel engine. The car succeeded the former variant Tata Indica to become one of the favourite hatchbacks of the country. The more improved version of Tata Indica survived in the market for a long time because of its demand from the taxi segment in the country.

It sported a superior engine that had a higher torque at a lower RPM. This updated model underwent improvement in gear ratios and starter motor protection. The weight of the car was also reduced by 10 kg. The powerful engine increased torque and improved fuel efficiency.

The 5-seater Indica eV2 was spacious and economical. The interior was designed elegantly, keeping in mind the tastes of the buyers. The exterior of the car consisted of a rear bumper, tail light cluster and sporty alloy wheels. Several other features like keyless entry rear and front fog lamps, tachometer, music system aided by Bluetooth, power windows, USB port, collapsible steering wheel, and rear parcel shelf made this car an affordable option for middle-class buyers.

Not only did the car provide improved driveability but also Auto-Drive Assist and Clutch-to Start features. Auto Drive-Assist ensured that the engine did not stall while climbing a gradient. It helped the driver to shift his foot to the accelerator. Clutch-To-Start guaranteed that the engine could not be cranked unless the clutch was engaged completely. Therefore, the feature eliminated the risk of re-crank even if the engine was on.