The Tata Safari Storme was unveiled in January 2012 in the 11th Auto Expo and launched in October 2012.

The car has gone through two generations of upgrades: the first generation, the Tata Safari from 1998-2019, and the second generation that kicked off from 2021 and continues in the present.

The facelift journey being more of an upgrade, the Tata Safari Storme came with redesigned rear lights and bumpers, with the rear spare wheel moved under the floor.

Another interesting upgrade was the chunky dashboard, which now came with an updated audio interface and charging slots.

While the third row continued to be vertically foldable, the drivers’ seat entry received a metallic ground clearance for a commanding view from the seat.

The car boasted of a 32-bit electronically controlled, 2,179 ccs Direct Injection Common Rail Engine capable of 150PS at 4000 rpm and a maximum torque of 1700-2700rpm, available in 5-speed manual transmission.

The mileage ranged from a minimum of 11KMPL to a maximum of 14.5KMPL, although as per consumers’ feedback, the mileage on the road was reported to be around 12.5-13KMPL.

The car did not offer an automatic transmission option; however, it was appreciated for its powerful engine capacity that enhanced its off-roading ability.

Some of its notable variants were the Safari Storme LX, Safari Storme EX, and VX models, which had additional features like air-conditioning along with heaters, reverse guide systems, and dual airbags, to name a few.

Equipped with both diesel and petrol fuel types, the last showroom price of this model soon after which it went out of production in 2019 ranged from Rs.9.79lakhs to Rs. 14.47 lakhs.

The Tata Safari Storme was powerfully equipped with a 2,179 cc Direct Injection Common Rail diesel engine with a Variable Turbine Technology and a five-speed manual transmission. Though currently out of production, the Tata Safari Storme did leave a mark in India’s SUV legacy with its attention to safety standards like disc brakes, anti-submarine seats, an anti-lock braking system (ABS), and all power windows.

With keyless entry and innovative steering columns, this model did leave quite an impression on the market. It competed with its rivals, namely the Mahindra Scorpio, Nissan Kicks, Hyundai Creta, Maruti Suzuki S-Cross, and the Mahindra Thar, to name a few. The last showroom prices of this model ranged from Rs.9.79 Lakh to Rs.14.47 Lakh.

Prioritising visibility, the panoramic windows on board this automotive delight gave the driver an edge with top-notch visibility of the path ahead.

Speaking of space, the Tata Safari Storme was dynamically designed to accommodate both luggage and people. The foldable arrangement of seats in the third row provided a multipurpose edge in terms of space.

The Tata Safari Storme remained high on comfort without a doubt. Its spacious cabin design and ground clearance ensured a smooth, bump-free drive and prioritised a walk-in entry into its spacious cabin.

Compared to its competitors, Tata Safari Storme made its way with a distinctive economic edge for Indian consumers. With a price range maxed out at 14.99 Lakhs, the Safari was a pocket-friendly choice over its comparable, the Toyota Innova Crysta that had started at 16.82 Lakhs.

In terms of mileage matters, even though the Tata Safari Storme did upgrade technologically, it lagged in a crucial factor of the mileage, which was not up-to-the-mark.

The upgrades in its variants were innovative but did not quite work well with its NVH proofing that could have been improved.

The model remained high on nostalgia but relatively low on performance. Even though it retained many features from its launch model, the retention came at a price as the age-old designs lagged behind the aesthetic upgrades by its comparables, namely the Mahindra Scorpio and the Maruti Suzuki S-cross.

The upgraded models of the Safari Storme turned out to be slightly rough on the pocket. Its second-generation model costs around Rs. 23.17 Lakhs, way more than its competent rival, the Mahindra XUV500, priced at around 20 Lakhs with upgrades. 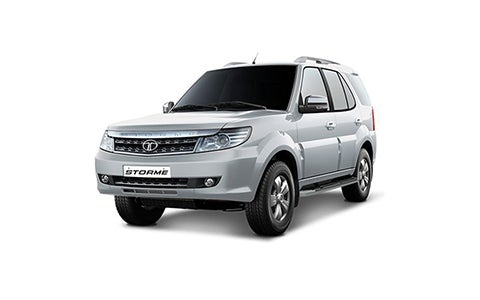 Overall, the Tata Safari Storme has continued to maintain its mark in the automotive market with its reputation as India’s best-selling SUV, even though it went out of production in 2019. Having ruled the Indian market for a decade, the Safari Storme, a household name in Indian families, sadly could not compete with the buzz of the automobile market.

Battling alongside its rivals, the Scorpio, the Nissan Kicks, the Tata Safari Storme never stopped surprising its consumers with its variants and technological facelifts. As the first generation slipped out of the picture, Tata Safari continued into its second-generation Tata Buzzard and Tata Gravitas designs.

With ergonomic upgrades, the facelift journey continues to battle the rising competition in the SUV plethora of urban India. With a promising mileage on the road, consumers have appreciated its overall performance. The Tata Safari Storme remained true to its name, providing a smooth drive with its powerful off-roading capacity. Tata Safari Storme was even considered safer than its rival, the Scorpio, in the automobile market.

With a low service cost, it was one of the best SUVs preferred by consumers as it was designed to adapt well to the Indian road conditions.

However, some technological lags and the uncomfortable third-row dilemma gave the Safari a setback in the market.

With a mix of nostalgic ‘Safari’ vibes and an effort to match the current generation, Tata Safari Storme continues to be in the race to win hearts again.