Tata Motors' Kite project (internally known as Kite 5) was launched in 2013 to produce two new small vehicles that were affordable. Therefore, these two vehicles would replace the models Tata Zest and Bolt, which failed to meet expectations due to their radical redesigns of their predecessors Indica Vista and Indigo Manza. Tigor, in particular, takes the role of the Tata Zest.

Back in the 2018 Auto Expo, Tata introduced the electric sedan, compact, covering a distance of 142km. This version was initially available for commercial purposes only and later on to private buyers in October 2019.

The facelifted version of October 2018 brought the most significant modifications to the front headlamps, grille, alloy wheels, and seats in new chrome colours. It came with a new 7-inch touchscreen infotainment system that supports Android Auto and Apple CarPlay.

Tata Tigor EV version increased the distance range to 213 Km on a single charge and gained an ARAI certification in October 2019.

The facelifted Tigor EV was renamed Xpress-T in 2021 and was again confined to business use exclusively. The Xpress-lower-powered T's variant now has a stated range of 163 kilometres.

The latest launch on 31st August 2021, introduced the Ziptron powered EV version with 4 variants. Tata Motors introduced an electric vehicle technology named Ziptron for the EV fleet, which has been used by Nexon as well.

The Tigor EV is powered by a 26kWh lithium-ion battery pack and uses this brand-driven electric vehicle revolutionary technology.

The electric car produces 74 bhp and 170 Nm of torque and accelerates from 0 to 60 kms per hour in 5.7 seconds. It also supports CCS2 charging, which includes rapid charging and charging from any 15A outlet. When connected to a fast charger, the battery can be charged from zero to 80 percent in roughly 65 minutes.

The Tata Tigor has been on the market for a while, but its most recent evolution in the shape of an electric car has sparked interest in India's passenger market. Ever since its inception in October 2018, many advancements have been made to this four-door sedan. The 1.2 litre JTP version with a turbocharged Revotron petrol engine to the facelifted version with changed front looks to the latest EV version in August. Tata Motors introduced the new Tigor EV in India on August 31, 2021, with four variants. The Tigor EV has the same Zip Tron engine as the Nexon EV.

Tata Motors' EV shocked us in more ways than one, breaking the barrier by becoming the most inexpensive electric vehicle on the market. Unlike the one utilised by fleet owners, Tigor EV has been designed to focus on personal mobility. This shift in emphasis is now geared toward performance.

The price of the Electric version for Tigor EV ranges between ? 11.99 Lakh - ? 13.14 Lakh. The 4 automatic transmission variants are XE, XM, XZ Plus, and XZ Plus Dual Tone. In the cheap electric car sector, the facelifted Tigor EV has no direct competitors. However, it is Rs2 lakh more inexpensive than its elder sister, the Nexon EV. The forthcoming Mahindra KUV100 EV is expected to be its main challenger. Daytona Grey and Teal Blue are the two exterior colours available. With a black roof, you may have both colours. Tigor cleared the crash test under the latest #SaferCarsForIndia by Global NCAP and bagged a 4-star rating for adult and child occupancy.

1. The iRA connected vehicle suite has several helpful features that may be controlled remotely via a smartphone app. It allows you to start and cool your car remotely on hot days, geo-fence and utilise a variety of security measures, lock and unlock the car, check the charge level, and so on.

2. Tata Motors has worked on the “Z Connect” companion app over time, and it looks good, although it needs improvement over the latest ones.

3. The music played through the 8-speaker audio system is good, and the 7-inch Harman Infotainment touchscreen is well-tuned. Automatic temperature control and a digital LCD instrument cluster are the additional features.

4. In the city, the performance is sufficient; there is a handy creep feature, precisely like any other automatic, and you can easily overtake. Thus, you see, the Tata Tigor pulls off from a dead stop like an expensive car.

5. Steering is light weighted while the suspension seems sorted for Tigor.

6. Plenty of room with more leg space for the second row. The space is enough even for tall occupants.

1. The only way to connect to your smartphone is through a cable connection, and there's no wireless charger expected in the near future.

2. The biggest compromise is in the boot. Because the battery pack is located below the boot floor, it is dome-shaped, which reduces the usable capacity and creates a trough around the dome that makes it difficult to store items flat. Because there's no room for a spare tyre down there, it's propped up against the right side of the boot.

3. The powertrain is virtually quiet, but there are no large and costly sound-deadening measures because this is a four-seater car. The AC compressor may be heard louder than anything else.

4. LED lighting, which works as per the car mode, is dim in the dark and not visible during the daylight.

5. Interior finishing details have been overlooked, as seen from the glue peeking out from the runner headings.

6. The Tigor EV's simple drive selector knob, which was discarded by corporate cousins Jaguar-Land Rover, is excellent in principle but horrible in practice. There are no stops on the knob, so you may turn it 360 degrees without knowing whether you're moving forward or backward. The MFD, which indicates what ‘gear' you're in, is the only actual method to know. 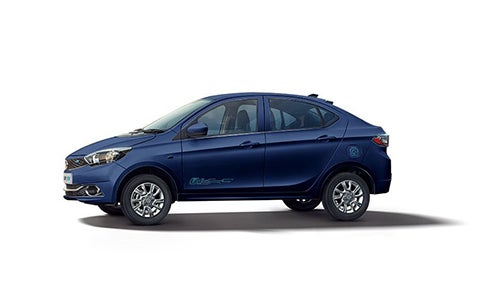 It is a good consideration for individuals with a faster running speed and can take advantage of larger subsidies. The new powertrain makes this the finest Tigor yet: it maintains good features like spaciousness, comfort, and safety while replacing the lacklustre engine with a smoother and cleaner one. Yes, the acceleration is sluggish, but I suppose that's not the idea. The Tigor EV is intended to be a simple-to-drive city commuter, and it succeeds admirably. The tiny proportions are ideal in the city, the steering is light and responsive, well-equipped, and the performance is quiet and smooth. Its range is also more than adequate for city living.

Tata Tigor could have been priced even lower to appeal to more consumers searching for a less expensive city drive-around car. The Tigor EV, on the other hand, starts at Rs 11.99 lakh (ex-showroom, India) and goes up to Rs. 13.14 4-star lakh for the top-spec trim. Of course, the state-by-state subsidies may see a variation (or, to some degree, a reduction) in this price. Tata has formulated this EV and packed it with new features like IRA Connected technology, remote cooling, intrusion alerts, remote controls, charging-related status, and remote diagnostics. The 4 star rating from Global NCAP is well defined from the twin airbags, ABS with EBD, and generals like rear parking sensors with cameras and a seat belt reminder. Price is our single criticism of the Tigor EV; otherwise, it is a good composition and well-thought-of Electric vehicle.