There was a time when the Toyota Corolla Altis was the executive sedan segment's undisputed ruler. This position was under threat, with competitors such as the new Hyundai Elantra and the Skoda Octavia vying for a bigger slice of the pie.

To keep up with its intense competition in 2017, the Altis has gone through some minor adjustments. The sedan's front grille, headlights, front bumper, and alloy wheels have all been updated to match Fortuner's design language. The car's overall profile remained unchanged, except for detailed taillights.

Toyota, a Japanese multinational carmaker, is a well-known manufacturer of gasoline and diesel engines. A 1.8-litre petrol engine and a 1.4-litre diesel engine were offered in the Corolla Altis.

The petrol engine of the Toyota Corolla Altis features a 4-cylinder,16 -valve with a displacement of 1794 CC. It has a Dual Overhead Camshaft (DOHC) with active assistance from dual- VVTi (Variable Valve timing-intelligent). This combination of cutting-edge engine technology is capable of producing 138 horsepower at 6,400 rpm and 173 Nm of peak torque at 4,000 rpm.

As a result, greater power and torque are produced, as well as improved fuel efficiency and reduced emissions. A 6MT(Manual transmission) or a 7-speed CVT are offered for the petrol engine.

Corolla Altis diesel is powered by a 1364 cc direct-injection four-stroke common-rail Diesel with Variable geometry Turbocharger and Intercooler, 4 cylinders in line. The engine is mated to a 6-speed manual transmission.

In terms of the multi-utility of SUVs at an accessible price and the sub-four-meter sector, sedans have recently been overshadowed to a large extent as India's car market grows. However, Corolla Altis has made it to the big game in the sedan segment with key advantages of reliability and comfort.

The model has 4 petrol and 3 diesel variants covering both manual and automatic gearbox. Manual gearboxes under the petrol version include Corolla Altis 1.8 G and 1.8 GL, while the two automatic transmission variants include 1.8 VL CVT and 1.8 G CVT. Diesel version just offers 3 manual gearbox options like 1.4 DG, Facelift and 1.4 DGL.

The ex-showroom price of the Toyota Corolla ranges between Rs. 11.99 - 16.89 Lakhs. A competitor to the Skoda Octavia and Hyundai Elantra, Toyota transformed Corolla Altis with a facelift in 2017, resulting in a sharper design.

Toyota is famed for its dependability, and the Corolla Altis has kept the legacy alive. Furthermore, even though it is now a discontinued model, replacement parts are easily available, and you should enjoy a worry-free ownership experience thanks to Toyota's nationwide service network.

Long travels are made more pleasant with reclining chairs with best-in-class legroom. The Corolla Altis is a comfortable car to drive since it absorbs bumps and potholes nicely.

The Toyota Corolla Altis boasts double wishbone suspensions at the rear and MacPherson struts at the front. The soft suspension setup is complemented by the plush seats for all passengers. The car is well-composed in corners and there is a good sense of fluidity in its handling.

The front suspension of the Toyota Corolla Altis uses MacPherson struts. The rear double-wishbone is the key to a smoother driving experience with this automobile, as it maintains the wheel straight despite uneven road surfaces. The soft suspension setup adds to the comfort of the passengers. In turn, the vehicle is well-composed, and its handling has a wonderful sense of fluidity.

In stop-and-go traffic, the dynamic cruise control is smooth and reassuring. In a variety of scenarios, lane departure assist performs admirably.

The Toyota Corolla Altis produces 139 horsepower at 6400 rpm and 172 pound-feet of torque at 4000 rpm. The 1.8 litre normally aspirated engine has the lowest basic performance statistics in the class.

The centre console has limited storage, and the door bins aren't even large. As a result, we aren't able to maintain the cabin clean. 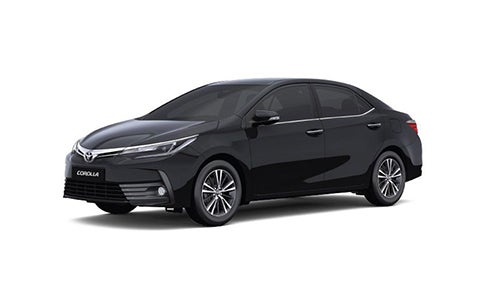 The Toyota Corolla Altis is not a car that one would characterize as youthful. Buyers may pick from five Corolla Altis models, with a respectably large range allowing them to customize their own combination of features to fit their budget. The 2020 Toyota Corolla Altis has a sporty design with a low stance and a clean and modern grille. Standard LED headlights and taillights with a low profile design are also included. Many automobile customers searching for an appealing ride without attracting too much notice will like the fashionably muted sheet metal.

Toyota Corolla comes standard with a colour display audio system situated high in the middle of the dash, which helps maintain the driver's eyes on the road. The ride quality has been improved, thanks to the redesigned substructure, a tilt/telescoping steering column and electric power steering.

It isn't the quickest in its class, but it is unquestionably the most comfortable. The addition of a comprehensive suite of Advanced Driving Assistance systems from Toyota's top-of-the-line model and exceptional handling are extra perks from the Japanese manufacturer. If you choose comfort above power, this is the automobile for you. There is definitely room for improvement in terms of disturbance in the cabin, but overall, this is a good car.