The Innova Crysta became a household name soon after its launch in India in May 2016. The much-awaited vehicle's model was anticipated for a long time. Toyota boasts about selling innumerable Innovas' since it started establishing its roots in the Indian market. It released a statement last year of having sold more than 8.8 lakh vehicles to date (including the old models of Innova, since 2005).

The first model of Innova was introduced in May 2005. The sole reason behind its launch was to replace another Toyota car model, Unser. Its first model was launched in just 6.82 lakh in India in 2005. The MPVs first-generation model gained immense recognition soon after being introduced in the Indian market.

Offered with manual and automatic transmission, Crysta has a decent fuel efficiency ranging between 8.0 to 16.0 km/litre. However, the fuel consumption also depends on other factors, including fuel type, transmission, and the daily route you drive the car on.

One of India's most hot-selling vehicles and the popular car, Innova Crysta is the first priority among a wide range of customers. Innova’s latest upgraded model gained utmost recognition as soon as it was launched in the Indian market. The brand features a new trapezoidal piano-black grille with chrome finish merging into the headlamps of Innova Crysta. In addition, the new diamond-cut alloys enhance the overall exterior.

Furthermore, the new upholstery jacks up the luxury quotient of the interior. Of course, how can we miss the large touchscreen infotainment system supporting Apple CarPlay and Android AutoPlay? The leading manufacturer Toyota, also offers other accessories in the Innova Crysta that enhance its value, such as last parked location, real-time vehicle tracking, geofencing, and many more. If you want to opt for these features, you need to pay extra to the brand.

An ideal choice for big families as it has ample boot space, headroom, knee room, and shoulder room.

Offers a smooth riding experience as the car is equipped with robust suspension.

Make the most of your journey by providing great comfort.

The powerful engine is the benchmark for trust and reliability that barely turns over 1500 rpm even at 100km/hr, making the highway ride superb.

Low maintenance enables you to save plentiful money compared to other cars of the same segment.

No Sun Roof and Front Sensors.

The top variant (ZX) does not feature a middle-row bench seat.

The car may get cumbersome in the city as steering becomes heavy at low speeds or during the time to park.

It becomes hectic for owners with individuals having high-usage to service the car at a very short interval of every 5000 kms.

The speaker's quality is inferior, and needs an upgrade.

The petrol variant is a guzzler. One should only opt for the variant in case of low running. Otherwise, it might affect your pocket immensely. 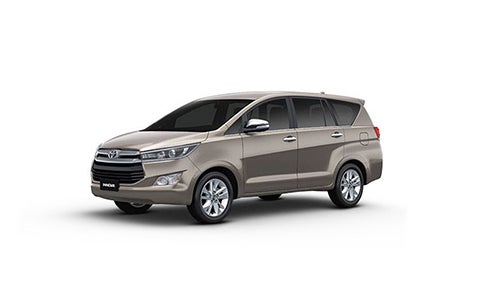 If you are looking to buy a car with the best resale value, do not look anywhere. Purchasing Innova Crysta is an excellent decision you can make.

The powerful vehicle is known for its reliability, fuel efficiency, good performance and long lifespan. Yes, it is actually right if you have heard it from your friend or read online that all Innova models can run more than 10 lakh kms and still go strong every day.

There is not much scope for improvement in this particular model apart from the cons mentioned above. It is the only reason why several private cab owners opt for this car.

Huge families mostly prefer the 7 seater car, and chauffeur owners. Opting for Innova Crysta is also the best decision you could make if you consider getting into the taxi business.

Overall, this Mean Platelet Volume(MPV) holds true value and allows you to recover up to 75% of the total investment you paid to buy this car even after 4 years of usage.

A high-class garage is incomplete without Innova parked between BMW, Audi and Mercedes.

What is the Seating capacity in Toyota Innova Crysta?

The Toyota Innova Crysta is a seven-seater car with a seating configuration of (2+3+2) and with enough legroom space. The passengers can sit with ease and the ride is comfortable too. It also comes with the option of 8-seater.

Does the Toyota Innova Crysta have a sunroof?

The Toyota Innova Crysta doesn't have a sunroof. In hot countries like India, summer is extremely hot, winter is too cold and even rains heavy, so it is difficult to drive with the roof down. Also, sunroof is not a necessary part of a car; it is just an additional feature to enhance the look of a car.

What is the ARAI mileage of the Toyota Innova Crysta?

What is the price of the base model of Toyota Innova Crysta?

What is the price of the top model of Toyota Innova Crysta?

What are the various EMI options available for Toyota Innova Crysta?

What is the Price of Toyota Innova Crysta Diesel?

The price of the Toyota Innova Crysta diesel starts from Rs.16,14,000 for 2.4 GMT and the top-end model costs Rs 23,02,000 for 2.7 ZX AT. It offers twelve diesel variants with specific features and functions.

What is the tyre size of Toyota Innova Crysta?

The size of the tyre is 215/55 R17 with alloy wheels and it is a tubeless radial tyre. The Toyota Innova Crysta offers seventeen different tyre models.

What is the kerb weight of the Toyota Innova Crysta?

The kerb weight of Toyota Innova Crysta is 1,855 kg and it is an essential stipulation of any vehicle. The gross weight is 2,430 kg and it is quite enough.

It comes with sufficient dimension and ample space. The length of the Toyota Innova Crysta is 4,735mm, width is 1,830mm, height is 1,795mm and wheelbase measures 2,750mm. The laden ground clearance is 178mm with front and rear tread of 1,530mm.

What is the transmission type of Toyota Innova Crysta?