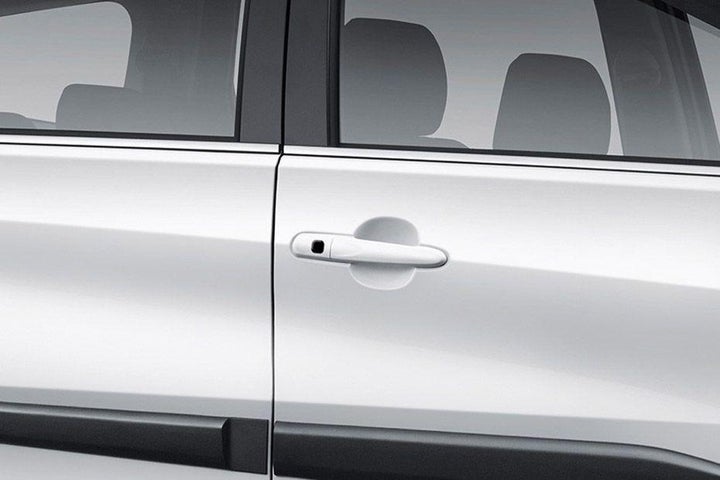 Toyota Rush was launched way back in 1997 as Daihatsu Terios. It was a small five-door wagon for drivers who wished to have a more affordable and economical off-road vehicle.

In the year 2000, Daihatsu gave the Terios a minor facelift. It occurred both in the interior and exterior of the vehicle. A brand-new chrome grille managed to replace the plastic-black grille. The high-end model had additional electric front windows, a central locking system, roof rails, rear-seat head restraints and a roof-mounted rear spoiler.

Its upgraded version included brand new elements on the exterior to enhance the car’s visual appearance. The re-designed Rush had the large four-slat chrome grille, LED headlamps and LED DRLs, inspired from the Indian specifications in Honda CR-V.

Toyota Rush had also reworked the bumper and made it look a lot meatier. It featured round fog lamps with rectangular housing.

Toyota Rush had a displacement of 1496 cc, with engine details of 2NR-VE, 4 Cylinder In-Line, 16 Valves, DOHC, and Dual VVT-i. It has a torque of 136 [email protected] and power of 104 [email protected] All the variants of this car ran on Petrol.

The car had a manual transmission and a 5-Speed Manual Gearbox.

Toyota Rush is a 7-seater compact SUV. Initially, the automaker launched it as a product from Daihatsu named Terios. Recently, Toyota Rush cars were visible on a trailer in West Bengal. There are speculations that apart from launching in India, it could be in the state to serve as a testbed for a C-segment MPV.

The top features of Toyota Rush include curtain, front and side airbags, ABS with EBD, vehicle stability control, hill-start assist, rear parking sensors and a rear camera. It also contains auto headlamps and front fog lights. Apart from these, it has a wide grille and flared wheel arches. Its design headlights include LED headlamps, a dollop of matte-black cladding, and two-tone 17-inch alloy wheels.

The expected price of Toyota Rush is Rs 10 lakh.

In the Indian market, competitors of Toyota Rush will be the likes of Renault Captur, Hyundai Creta, and Renault Duster.

Toyota Rush looks modern and instantly catches the attention of others.

It has striking features, including angular front headlamps, a wide front grille, roof rails, rugged side profile with black cladding, machined alloy wheels, and an extremely sporty back profile with wide and horizontal tail lamps.

The design elements in Rush make this vehicle stay a cut above the rest when compared with other comparable models in the same segment.

It offers the added advantage of two extra seats in the third row. So, you can have more people travelling in the car, hence making the ride even more enjoyable.

The price is quite reasonable when you consider the features it has on offer.

The car gives an indestructible feel to its riders, and the reliability that the brand Toyota carries gives everyone sufficient mental peace to travel freely.

Even though the Toyota Rush looks appealing from the outside, moderate styling on the inside leads to contradictory opinions.

The interior's subtle style, going with the odd-looking instrument and centre consoles, dampens the spirits and the overall experience.

The 1.5-litre petrol engine fails to deliver the requisite power that one would usually expect to receive.

Even though the linear power delivery is okay for effortless and comfortable driving still, it is not sufficiently engaging for the driver.

Despite having another row for two more passengers, space becomes an issue for those who sit on the third row. When you are on a long drive, an adult would feel uncomfortable sitting over there.

The sound of its engine is quite rough, and it disrupts the comfort of passengers. 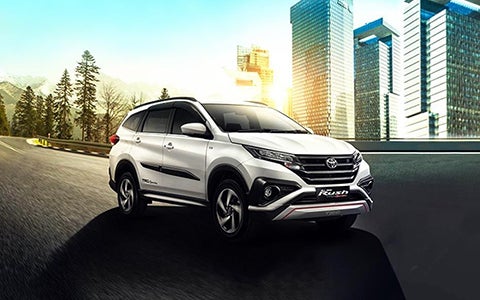 Several experts have driven the Toyota Rush, and most of them believe that it is an excellent car. They say that it has an incredible design and possesses a captivating look. Moreover, there is a feeling that this compact SUV looks bigger, better and very comfortable. According to them, the price is also quite affordable. Despite having a few glitches, the car's advantages outweigh them.

When you compare Toyota Rush with car models from other makers, it has power steering. The tyre size of Rush is comparatively bigger, hence making handling and cornering extremely convenient. Moreover, the price you pay for Toyota Rush is lower than similar cars of other makes.

Some of the best features of Toyota Rush include Steering Mounted Controls, Remote Fuel Filler, Tubeless Tyres, Alloy Wheels, Rear Washer and Wipers, Tinted Glass, Child Seat Mounting Provisions, Sunvisor with Ticket Holder, and Sunglass Holder. The mileage of this car ranges from 15-17 km/l to 19-20 km/l. As far as the technology is concerned, you would get a 7-inch touchscreen music system, eight speakers, AUX compatibility, USB compatibility, MP3 playback, and bluetooth compatibility. You would get an excellent off-road driving experience with this Toyota Rush.

The car is ideally suited for a middle-class family as it comes at an affordable price.