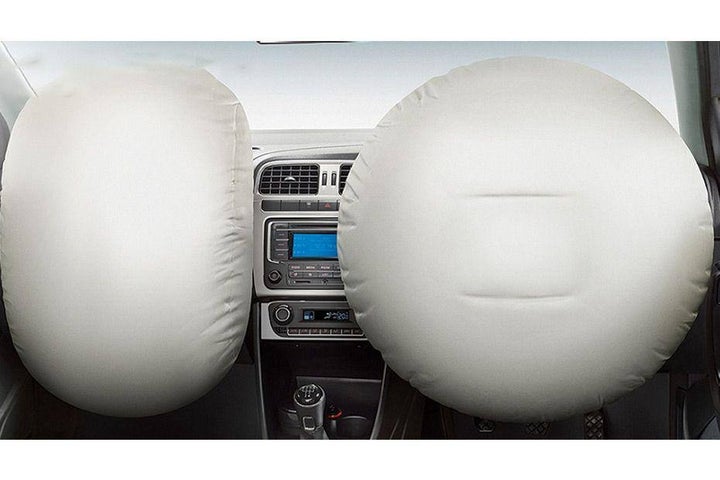 The Volkswagen Cross Polo is the premium, tougher version of the Polo GT TSI, launched in 2013 in several markets, India being one of them. The German company has teased and tested it in several markets in different parts of the world.

The Volkswagen Cross Polo is available in the International markets in diesel and petrol variants. Both are available in India as well. This car can generate a maximum power of 89 bhp @ 4200 RPM and a maximum torque of 230 Nm @ 1500 RPM. It can generate a top speed of 160 kmph and accelerate from 0-100 in 14.9 seconds.

The braking system of this car is pretty decent. It comes with Anti-Lock Braking System (ABS), McPherson Strut with Stabiliser Bar in the front suspension, and a Semi-Independent Trailing Arm in the rear. It’s equipped with Disc brakes in the front and drum brakes in the back.

As for the safety features, it has two airbags (driver and co-driver). There’s a seatbelt warning, central locking, power door locks and crash sensors. However, there are no child seat anchor points or anti-theft alarms. This car also lacks a tyre pressure monitoring system and clutch lock.

The infotainment system comes with a digital display. However, there’s no touch screen. It has a CD player, an AM/FM radio, and Integrated (in-dash) Music system, and an accessory power outlet.

The Cross Polo has air conditioning. However, there are no rear AC vents. It has got cruise control, rear parking sensors and a heater.

Volkwagen has discontinued the Cross Polo, and the car is now out of production. However, you can still buy it in the used-cars market.

The Volkswagen Cross Polo can undoubtedly be claimed as the tougher version of the much-celebrated Polo from the German car manufacturers.

Straightaway it looks larger and much more rugged, most of which is down to the plastic cladding that guards the lower half of the car. Sitting in all that matte black is the silver chingar at the front and the diffuser at the rear. These cosmetic changes have increased the length by 17mm and the width by 16mm. If you look at it closely, it will also feel a little bit taller. And rightfully so, because the silver roof rails increase the car’s height by 21mm. The roof rails give the Cross Polo its attractive, adventurous look.

The Volkswagen Cross Polo is designed to be your perfect companion on Indian roads. You can buy your Cross Polo in two fuel types—diesel and petrol. While the diesel variant has an engine of 1498cc and can give an ARAI mileage of 20.14 kmpl, the petrol variant can provide a mileage of 1198cc. Both versions have a manual transmission type.

The Volkswagen Cross Polo comes in three colour variants— Flash Red, Deep Black and Reflex Silver. However, some of these colours are available in specific versions only. It’s a fantastic car with a seating capacity of 5 people. In Indian markets, the Volkswagen Cross Polo diesel variant sells at Rs. 8.81 Lakh. The petrol variant sells at Rs. 7.60 Lakhs. 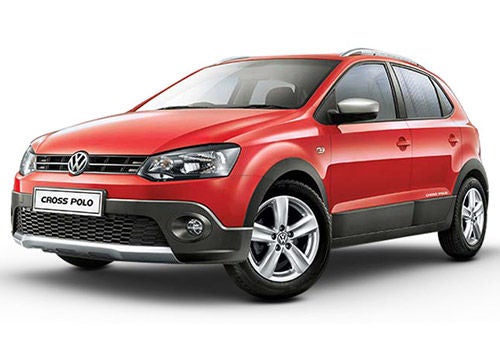 The Volkswagen Cross Polo is designed to give a raw and sporty experience. It comes at a very affordable price in the Indian markets. Not to forget, it has the trust and build-quality of Volkswagen, one of the best car manufacturers in the world.

It gives an SUV feel to one of the most successful hatchback models, the Polo. Its top-notch features, perfect ride quality and controlled handling makes it one of the best choices for car lovers in the country.

The Cross Polo is loaded with features, such as the Cross Grille with chrome accents and ‘cross’ bumpers front and rear with silver accents. It has a high quality, scratch-resistant dashboard, superior ‘cloud’ fabric upholstery, chrome interior accents, leather-wrapped steering wheel and gear shift knob.

It uses the same engine as that in Polo. Therefore, performance quality is compromised, as the Cross Polo is heavier than Polo. In hilly areas, you will feel a lack of power.

There is no upgrade from Polo in ground clearance, due to which you’ll have to be extra cautious while driving on bumpy roads.

In India, the car comes at an ex-showroom price of Rs. 8.4 Lakhs, which is costlier than its contemporaries. 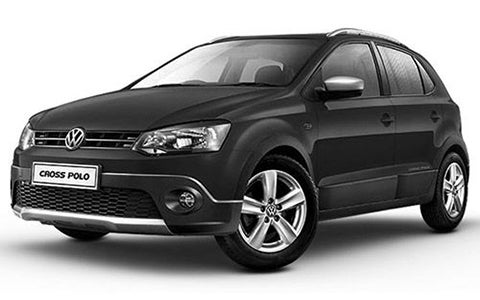 Cross Polo will not disappoint you if you are a loyal fan of Volkswagen cars, either. It’s superfast, rugged, and has the build quality of the German brand. Volkswagen designers have done their best to distinguish the Cross Polo from the regular Polo, yet not revamp it so much that it loses its Polo origin. The Cross has single bar grills.

On the downside, though, the wheels look a little puny inside muscular wheel arches. It looks tougher and gives the impression of being tougher, but mechanically it's identical to the Polo hatch. The front-wheel-drive has the same 15-inch rims you see in the Polo Highline. Its ground clearance is only 168mm, same as the Polo hatchback.

On the road is where the Volkswagen Cross Polo is meant to be used. The motor is the regular three-cylinder 1.2-litre diesel motor, the same as the Polo. If you expect a bit more punch, you might be in for a disappointment. It has 74 bhp of power and 11kilograms of torque, identical to the regular Polo. It feels a little sluggish; you need to make many gear changes to keep pace with the traffic. But once you cross 2000 rpm and gather pace, it feels adequate. The suspension of this car is good, though. It serves the impression and reputation of this car just right.

Overall, the Cross Polo is a decent upgrade from the regular Polo as far as the looks and feel are concerned. However, they are just the same in terms of performance and quality.