Top 10 Most Popular Best Used Cars To Buy In India

Top 10 Most Popular Used Cars To Buy In India

Top 10 Most Popular Used Cars To Buy In India 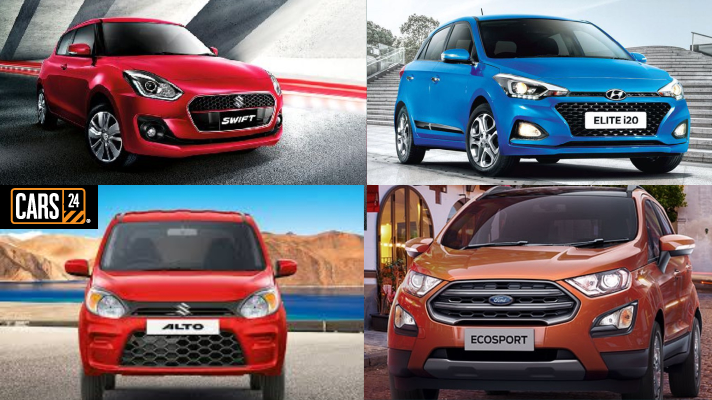 There is a wide choice of cars to buy in the Indian market today. A new car buyer has to spend a considerable amount of money to buy an entry-level sedan or hatchback. And the fact that some Indian states like Karnataka, Tamil Nadu levy hefty road tax on new cars, does not help.

Like most of us are aware, a new car depreciates the moment you drive it out of the showroom. The depreciation rate is estimated to be around 10-15 percent in the first year of ownership. This is where the used cars come in to play!

The market for used cars in India is on the rise. Since the average used car costs less than half of an average new car, more people are flocking to dealers and used car companies like us.

Just like buying a new car, buyers are concerned about safety and reliability, among other factors. Pre-owned cars at CARS24 are refurbished by experts to as good as new and also come with a six-month free warranty. Also, you get a 7 Day Trial (The first of its kind in India) when buying used cars with CARS24!

We’ve listed out the top 10 most popular used cars to buy in India, and while some may be obvious choices, there might be a few cars on the list that will take you by surprise.

The Ford Ecosport has been the best selling car for Ford since its launch. The sub-compact SUV comes with 3 engine options, a 1.5-litre petrol that produces 120 BHP with 149 Nm of torque, a 1.5-litre diesel that produced 99 BHP with 215 Nm of Torque, and a 1.0-litre Ecoboost that churns out 121 BHP with 150 Nm of torque. The Eco-sport has good power and is fuel-efficient with a mileage of 14.7 kmpl to 21.7 kmpl. The diesel Ecosport gives a mileage of 21.7 kmpl while the manual petrol variant offers 15.9 kmpl.

The Ecosport offers comfortable headroom and legroom for its occupants with ample boot space. The regular service and maintenance cost for the Ford Ecosport will not exceed Rs 12500 to Rs 15000 per year.

The new Ecosport prices start at Rs 8.54 Lakhs (ex-showroom) while you can buy both used petrol or diesel Ford Ecosport for under 5 lakhs.

Honda Amaze sedan is a stiff competitor to entry-level sedans like Maruti Dzire and Hyundai X-cent. The Amaze comes with both petrol and diesel engine options. The drive quality offered by its superior suspension is impeccable for both city use and long drives. The sedan also offers abundant knee and legroom for the rear passengers and comes with features like ABS, EPS, power windows and more.

Hyundai Verna is a premium sedan and one of the best selling models from the Korean carmaker. The sedan comes in both petrol and diesel engine options with a manual gearbox or an optional automatic gearbox. Especially the diesel Verna is very punchy as it’s powered by a 1.6 liter CRDi diesel motor. It is also the most fuel-efficient in its class, and its sports-centric fluidic body makes it stand out from the rest.

The sedan is feature-loaded with power steering, power windows, climate control, ABS, airbags, touchscreen infotainment system with steering control, adjustable steering, and alloy wheels. Verna offers ample legroom and headroom; it can accommodate five adults comfortably with large boot space. The regular service and maintenance cost of a Hyundai Verna is in the range of Rs7500 to Rs10000.

The Hyundai i20 is a premium hatchback produced by the Korean carmaker. The Hyundai i20 and the i20 Elite rivals hatchbacks like the Maruti Swift, VW Polo, Skoda Fabia etc. The i20 too is feature-loaded with power windows, power steering, airbags, ABS, automatic climate control, touchscreen music system with USB, aux, and mobile connectivity. The i20 offers comfortable legroom and headroom for four adults and a child. The regular service and maintenance of the Hyundai i20 are in the range of Rs 5000 to Rs 8000 for 1 year.

Maruti Suzuki’s astonishing success in the last decade can be attributed to its key contributors, the Swift and the Swift Dzire. The Dzire has been the best-selling sedan since its inception. The car is also hugely popular in the taxi segment due to its robust built quality, spacious cabin, good fuel economy and low maintenance costs.

Swift Dzire comes with both petrol and diesel engine options;  a choice of automatic and manual gearbox options. The sedan also come equipped with features like safety airbags, ABS, EPS, etc. The sedan is said to deliver an astonishing mileage of around 21.21 to 28.4 kmpl. Incase, the Swift doesn’t satisfy your needs in terms of boot space, go for the Dzire!

Among the most widely driven and popular hatchbacks, the famous Alto from the trusted Maruti Suzuki stable emerged as one of the most sold used hatchbacks in 2020. The Alto comes with two petrol engine options – 0.8 Liter and 1.0 Litre ( Alto K-10). Later models are also available with an AMT gearbox (automatic).

The Alto is probably the most basic entry-level car that is very easy to manoeuvre, fuel-efficient and pocket friendly in terms of the maintenance. The vehicle is ideal for beginners and learner drivers.

The famous Hyundai Santro Xing was produced between 2008-2015 was indeed a pocket rocket with a four-cylinder 1.1 Litre engine under its hood. The Xing offers excellent driveability. Its fuel is efficient and easy on maintenance; the hatchback was among the most sold used hatchbacks in 2020. The Xing is also available in CNG and LPG options.

The Honda City is one of the most appealing cars for 90’s kids as it was the first luxury sedan that truly stood out from the rest! The car has been in the game for a long time, for almost 20+ years.

Currently, in its 5th generation, the car is selling like hotcakes as even in 2021! This beauty defines class, luxury, and comfort on four wheels.  All generations of Honda City offer comfortable seating, headroom, legroom and ample boot space. The Honda City is not the one that is over-flooded with features; it has kept things sophisticated and classy over the years. The performance has been an essential point for buying a Honda City; it was the first Indian car that crossed the factory’s 100 Bhp mark. The Gen-1 Honda City Vtec is still sought after by enthusiast; it’s also of choice of racing teams in India for circuit, drag and rally racing.

Another candidate among the most sold used hatchbacks in 2020, the i10, one of the most popular cars, something that’s nearly ubiquitous on the Indian roads attracted a lot of attention for various stellar features. The i10 and Grand i10 has a wide and spacious cabin, and comfortable for even tall drivers. The i10 is available with both automatic and manual transmission options.

Maruti Suzuki Swift has ruled the Indian roads from the past 15+ years. Currently, in its third generation, the Maruti Swift still tops the sales chart as a favourite car for first-time buyers, youngsters, and families. The hatchback is available in Petrol, Diesel, CNG and LPG options. The Swift offers excellent driveability, easy on maintenance and also got the stellar looks.

The hatchback is known for its fuel economy (mileage) and it also provides sufficient power from its 4 cylinder engine. The first-gen Swift was powered by a 1.3 Litre(G13BB) petrol engine while the modern Swifts comes with 1.2 lite (K12) petrol engine. The Diesel Swift is powered by a 1.3 Litre engine, one of the favourite buyers’ choices in the used car market, as its out of production.

Swift is one of the best handling hatchbacks. The Swift comes equipped with power steering, power windows, ABS, airbags, and a touch screen infotainment system. The regular service and maintenance for the Maruti Suzuki Swift should cost in the range of Rs7000 to Rs10000 for 1 year.