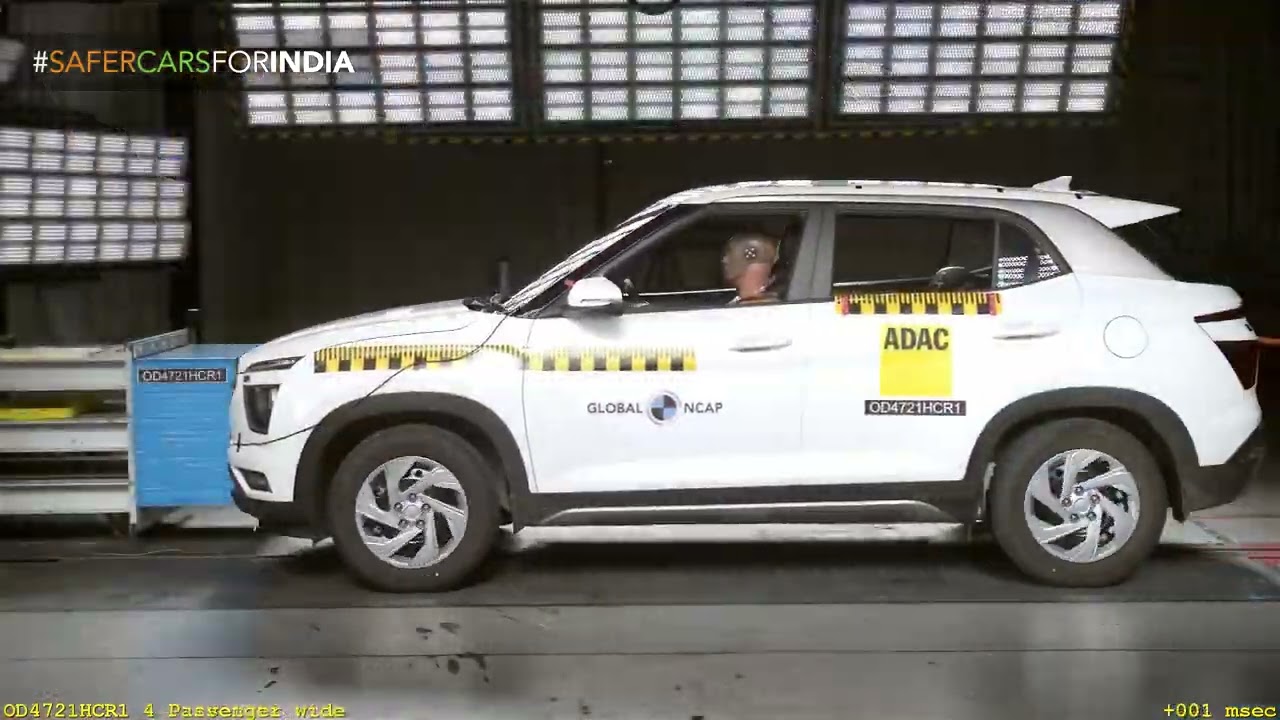 A close relative of the Kia Seltos, the second-gen Hyundai Creta has bagged a 3-star rating for adult as well as child occupant protection in GNCAP crash test

Easily the most popular C-SUV available today, the Hyundai Creta was one of the handful of models tested by Global NCAP in its latest round of tests. The compact SUV has bagged a 3-star rating in adult as well as child occupant protection. The model tested was the entry-level E trim, which misses out on some safety features, like side and curtain airbags, available on the high-end models.

The second-gen Hyundai Creta was subjected to the frontal offset crash test by Global NCAP. The impact happened at a speed of 64 kmph and the testing body has stated that it has found the car’s body to be ‘unstable’ in this test and that it’s incapable of  ‘withstanding further loadings. The C-SUV has scored 8/17 points in adult protection. It has been noted that the protection provided to the driver’s head was ‘adequate’ while it was ‘good’ for the passenger’s head. Both the front-seated dummies had ‘good’ protection to the neck but chest protection was rated ‘marginal’ for the driver. It was ‘good’ for the co-driver. Also, the protection for the knees of both the dummies was rated ‘marginal’ and the testing body noted that the occupants can come in contact with ‘dangerous structures’ placed behind the dashboard.

In terms of protection to child occupants, Hyundai Creta scored 3 star rating with a score of 28.29 out of 49. The entry-level Creta E missed out on some points because it doesn’t offer ISOFIX child seat restraints and GNCAP noted that the seat belt did not stop the seat from excessive forward movement of head in an event of a crash. Also, it noted that the three-year-old front-facing child has only a ‘weak’ protection to his chest. But a 1.5-year-old rearward facing child will have ‘good’ protection to head as well as chest. Furthermore, the testing body remarked that the base Creta doesn’t come with a three-point seatbelt for all passengers and even doesn’t have standard ISOFIX child seat mounts.

It’s also noteworthy that the Kia Seltos, which shares the K2 platform with the Hyundai Creta, has scored a 3-star rating at Global NCAP. The standard safety features on offer include front dual airbags, ABS with EBD, reverse parking sensors, speed-sensitive auto door lock, and seatbelt reminder. Side and curtain airbags are on offer only on the SX(O) model.

While additional features such as Electronic Stability Control (ESC), Vehicle Stability Management (VSM), ISOFIX child seat mounts and rear disc brakes are available SX Executive trim onwards. It is important to mention here that the Government of India is taking steps to make changes to the minimum safety requirements in all cars sold in the country. A highlight of the update will be making six airbags mandatory on all cars sold in the country from October 2022. In fact, the Government even plans to make ESC and Autonomous Emergency Braking mandatory in the coming years. Meanwhile, even the Global NCAP is all set to tighten its safety standards. From July this year, it will update its testing procedure to factor in ESC and even start conducting side-impact and pedestrian protection tests.

Later this year, Hyundai Creta will receive a mid-cycle facelift which will see inclusion of ADAS and additional safety features apart from even getting cosmetic updates to enable the C-SUV realign itself with the carmaker’s global design language. Other than locking horns with the Kia Seltos, the Hyundai Creta even rivals the VW Taigun, Skoda Kushaq, Nissan Kicks and MG Astor, all of which are yet to be tested by Global NCAP.