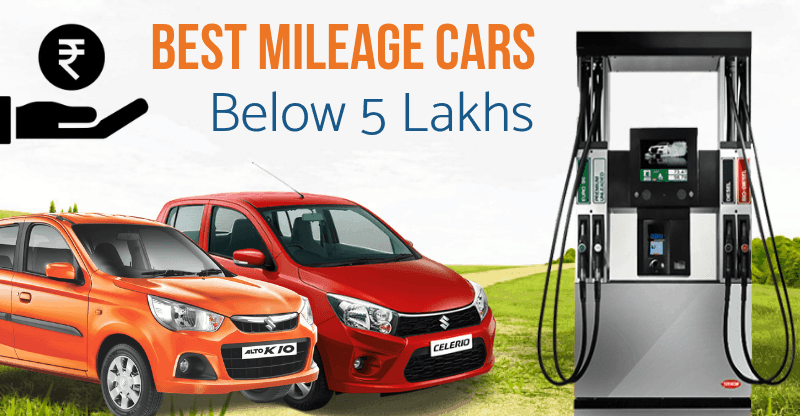 For most people looking to purchase a car in India, two primary considerations come to mind. While price takes the primary preference, the next most important criterion is fuel efficiency or as we commonly know it, mileage. In a market where small cars take the majority chunk of sales, the economy is always on high priority. Several manufacturers like Maruti Suzuki have actually stood on top of the food chain of several segments by making cars that give priority to mileage. In this article, we will take a look at the best mileage-delivering cars you can purchase in a tight budget. So let’s start with the best mileage cars in India below 5 lakhs.

Starting off our list of the best mileage cars under 5 lakhs is the infamous Maruti Suzuki Alto. The Alto is a car that really needs no introduction. It was incepted in 1998 and has come a really long way since then. Since then it has only received one major update in 2012. Despite that fact, it has built an extremely strong establishment in the Indian budget car segment.

Currently, more than 3.5 million Altos are roaming the roads of our country which is quite a massive feat. The Alto doesn’t have anything blingy both outside and inside. It’s a simple car equipped with just what’s required. The highlight in this car is it’s unrealistically easy to drive engine. It’s perfect for beginners and people who will be spending most of their time driving in the city. To top things off, it gets an ARAI rated mileage of 24.7 kmpl.

Also Read: How to Get the Best Mileage From Your Car

The next car on our list of best mileage cars in India below 5 lakhs is from the house of French carmaker, Renault. The Kwid was Renault’s first mass-market car in the country’s market. It was launched in 2015 as the production version of the Kwid Concept showcased in the 2014 Auto Expo. The Renault Kwid received a very positive response when it was launched. It competes in the entry-level hatchback segment and fights against some really strong competitors like the Maruti Suzuki Alto.

Despite the giant it’s going up against, the Kwid has actually managed to do surprisingly well. Unlike the other cars in the segment, the Kwid emphasizes quite a lot on creature comforts and styling as well. It gets a very SUV-like appearance and despite its small proportions, the futuristic design gives it a very distinct road-presence. The Renault Kwid is a feature-loaded car and is the only car in this segment with a touchscreen display. It comes in two engine options, a frugal and forgiving 0.8-litre and a more-punchy 1.0-litre variant.

Maruti Suzuki makes another mark on our list of best mileage cars under 5 lakhs . Keeping aside the Alto, the other car on their portfolio with brownie points for fuel efficiency is the Celerio. The Celerio was launched in 2014 and was aimed at the market as a mid-tier hatchback. What the Celerio came into the limelight was for being the first car in India with the poor man’s automatic, the AMT transmission. Thanks to the Celerio, the AMT transmission has found its way into a variety of affordable cars. The Maruti Suzuki Celerio itself is a decently packed car offering an excellent amount of interior space with neat styling. Despite having an automatic transmission mechanism, the Celerio prides on fuel efficiency with an ARAI rated mileage of 23.1 kmpl.

Datsun isn’t a very familiar name in India but has quite an expansive history as a carmaker. Its initial run lasted from 1931 till 1986 following which the brand was discontinued for almost 3 decades. It was resurrected by Nissan in 2013 and have since then been representing them as a low-cost car brand in emerging markets. The Datsun Redi Go is their most affordable offering in the brand new line-up. The Redi Go shares its platform with the Renault Kwid in a CMF (Common Module Family) construction.

But apart from the chassis and the engine, the Kwid and Redi Go have nothing in common. Particularly in terms of appearance, the Redi Go is entirely different than the Kwid. In fact, it actually looks more stylish than the Kwid with strong character lines flowing across the car. It falls back on the interior design and equipment, however. Despite that, it’s still a strong contender on this list as it is more affordable than the Kwid and offers a healthy mileage figure of 22.7 kmpl.

We now come to the final car on our list of best mileage cars under 5 lakhs in India. The Tiago is Tata’s latest launch in the hatchback segment which replaces their previously launched Bolt hatchback. It adopts their fresh design and manufacturing language which is starkly different to the cars they made before. The Tiago is nothing short of a revolutionary Tata product as it brings a lot of equipment and features to quite an affordable price point. Unlike the previous utilitarian Tatas, the Tiago is more focused on strong construction and premium build quality.

It also looks quite attractive when viewed from any angle. Step into the Tiago and you are welcomed to a brand new world of Tata. The Tata Tiago gets a very simple design but it consists of all the necessary elements at the right places. What the Tiago really shines in is the fuel efficiency figures. With an ARAI rated mileage of 27.28 kmpl, the Tiago is the most fuel-efficient car on our list of best mileage cars in India below 5 lakhs. It is also the best mileage diesel car under 5 lakhs in the country.