Modified cars are the stripped down or exaggerated version of motor vehicles. They present a great opportunity for the driver to customize their ride according to their taste. Indians are known all over the world for decorating their cars in the best way possible. From those “Mom’s Gift” stickers on the rear view mirror to the heavily modified Maruti Baleno with scissor doors which you can see here. ‘DC’, short for ‘Dilip Chhabria’ designs is a famous automobile designer working in India. They are known for modifying one of the best cars in the country. From making a lounge version of the Toyota Innova to making the modern age version of ‘HM Ambassador’, DC modified cars escape the dynamics of automobile design to bring one of the most practical yet quirky wheels on the road.

Here are some of the best DC modified cars in India: Compact SUV segment has been doing wonders for the car enthusiasts in India. To top this off, DC designs has created a mean looking, polished version of Renault Duster. The DC design Renault Duster comes with a new set of headlamps and front grille. The general misconception of many people in the country is that car modification is risky. This is because they fear, the actual body of the vehicle will get tampered. In this particular design by Dillip Chabria, the basic silhouette of  Renault Duster is kept intact. By changing the front glance of the vehicle, DC designs have managed to bring more aggressiveness and form to the vehicle. As the USP of DC designs signifies, the interiors of the vehicle are totally stripped down to give it a more premium and lounge vibes. The seats are changed to fix best in class loungers. Ambient lighting around the environment adds a soothing touch to the vehicle. 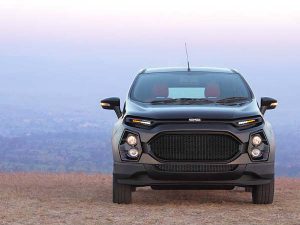 Next car on our list of DC modified cars in India is the Ford Ecosport. Already very successful among motorads in the country, Ford Ecosports designed by DC presents a more sporty stance. In terms of exteriors, DC has added a new bold front grille with new LED headlamps. Inside the cabin, the ecosports by DC is designed in two-tone upholstery with major lighting changes. DC has also added an upright touchscreen to the package.

Just like the Renault Duster, DC has included an external kit for Ecosports rather than changing the base design philosophy for this compact SUV. HM or Hindustan Motors has been a symbolic figure in the Indian political scene due to the HM Ambassador. Officially known as the ‘Sarkari Gaadi’, the Ambassador has been ruling the streets of India since ages. To add a new age touch to the car and bring its charm back, DC has modified the vehicle into a lounge vehicle. Taking the design cues from the Mini Cooper, DC has installed round headlamps and a quirky front grille to the Ambassador. Inside the cabin, DC has installed features such as laptop tray and curtains for privacy for the rear seat passengers.

You may also like: Top 10 Latest Car Technology Innovations of The Past Decade Next car in our list of DC modified cars in India is the Toyota Fortuner. This luxury off-roader SUV from the house of Toyota in India has been retouched by DC designs to bring its aggressive styling to the front stage. Spotted with wide wheel arches and new front grille as part of the kit, Toyota Fortuner by DC looks not just aggressive but dynamic in all its angles. The most exciting part about the DC designed Toyota Fortuner is the interiors of the vehicle. Fitted with lounger seats, bright two-tone upholstery and entertainment units, the DC Fortuner brings a complete package of comfort and aggressive styling to the streets of the country.

Toyota Innova is known across India for its durability and low maintenance. To complement the long tripping appeal of the Toyota Innova, DC has reimagined the SUV in its own way. The DC design Innova is a lounge on wheels made to make those road trips fun and comforting. The exteriors of the Innova lounger by DC include a new front grille kit and side claddings. The magic of DC stays within the interiors of the Innova with plush lounger seats, ambient lighting and top of the range entertainment unit. The lounger Innova by DC also include refrigerators to keep your drinks cool while on the go and presents a first class flight experience to the commuter.

You may also like: Best Diwali Offers on Cars 2018

*All the prices depicted here are for the base car. DC Designs charge extra for modifications.

One Reply to “DC Modified cars in India”