Tyre Burst: Things To Do When You Encounter One

Tyre Burst: What to Do When You Encounter One? 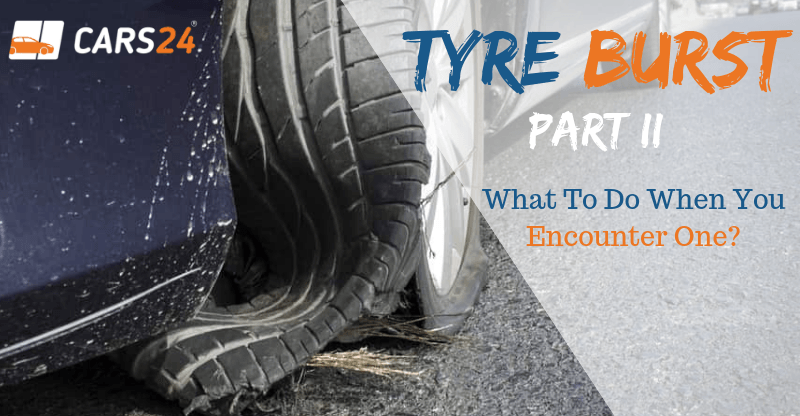 Previously, we addressed the topic of tyre bursts to show what exactly they are and the reasons for their occurrence. We also listed at the various measures you should take to safeguard your car from a tyre burst. Sadly, despite the growing technologies and the precautions you take, there is still a high possibility that you can come face to face with this harrowing situation. In case that happens and your panic instincts take over, the outcome can indeed get very disastrous. Today, we’ll take a look at how to handle a tyre burst situation when you encounter it. So let’s start with the do’s and dont’s for such a scenario to ensure the best chances of coming out unharmed.

Safely Dealing With a Tyre Burst:

Stick to the Appropriate Speed

Overspeeding on public roads has a very pronounced potential for disaster in several ways. Even 90% of traffic advisories are focussed on stressing on the same point, “Don’t Overspeed”. Adding to the existing reasons why you shouldn’t be pushing the speed barrier in your car, here’s another one. If you do come face to face with a tyre burst, the possibility of coming to safe stop on time is much higher when you’re at a lower speed.

If you are at a speed of 70 kmph and meet with a tyre burst, the car will remain relatively more controllable and will take lesser time to come to a halt than a tyre burst at say 120 kmph. At higher speeds, even the slightest disturbance is more than enough to send the car into a frenzy. Shedding velocity will also take a longer time if it’s done at higher speeds. Hence, you’ve probably been reiterated this a million times already but always ensure that you are driving at a safe and manageable road speed. When you are falling, your body’s default natural instinct is to put your hands out forward. Similarly, in the situation of losing control of your car after a tyre burst, your natural instinct will tell you to push your foot into the brake pedal firmly. However, you must really battle that urge as the sudden application of brakes during a tyre burst will only worsen the situation. Hard-Braking increases the level of imbalance while driving and you greatly risk going into a wheel lock as well. The latter is a less-concerning risk with ABS systems becoming increasingly common these days. The imbalance due to hard-braking is still a very much valid factor. Braking should always be done in a gradual manner just like you would do in a normal situation.

Also Read: How ABS Can Save Your Life Keep your Vehicle as Straight as You Can

When you are in the middle of a tyre burst, you really don’t have a lot of control over the vehicle’s direction. But always try to ensure you are going in a straight direction. Turning or veering during a tyre burst, can aggravate the situation even more. Don’t even bother to attempt for any directional changes unless you are going straight towards the divider or into a ditch. A really useful technique to use here is target fixation. Target fixation is the phenomenon by which human instincts take over and you tend to automatically steer the vehicle to the direction you are looking at and make necessary adjustments. So when you are faced with a tyre burst always be sure to look where you want to go and not the obstacle you want to avoid. Don’t Remove Your Foot From the Accelerator Suddenly

This is another by-product of your panic reaction instincts. Along with the impulse to slam the brake pedal with full force, the sister reaction is to remove your foot off the accelerator pedal immediately. Again similar to the other sudden inputs, an abrupt decrease in throttle will also cause the vehicle to get dis-balanced. Keep in mind, the acceleration is making a lot of contribution to the car’s momentum. Suddenly letting it go will push the brunt of the kerb weight back to the wheels and disturb the uniform momentum which is required to navigate safely through a tyre burst. In fact Michelin actually recommends sustaining the throttle for a small duration before letting it go during a tyre burst. The thing is not a lot of people are familiar with engine braking. But from what we know, it’s nothing short of a lifesaver in emergency situations. The specialty about engine braking is that it is an inherent quality of your engine. The deceleration force emitted is exerted directly on the engine components and slows down the piston itself. So what that translates to is that you can get a really good amount of stopping power without risking the possibility of wheel lock. But what you need to ensure is that it is done properly. You need to be very precise with your timing as improper engine braking has a high chance of inducing fishtail which certainly won’t work to your advantage. Give the right amount of throttle blip with timely clutching and downshifts and there’s a good chance you’ll be breathing a sigh of relief at the end. One Reply to “Tyre Burst: What to Do When You Encounter One?”