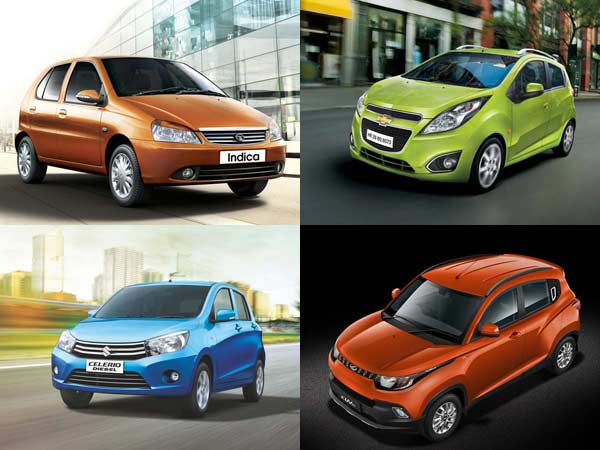 While there has been quite a drop in the popularity of diesel cars, there are many who swear by these vehicles due to their high torque output and higher fuel efficiency than comparable petrol-powered models. Here is a list of the cheapest diesel cars in India.

The Tiago is the cheapest model from Tata Motors but it comes with a spacious interior, a great audio system, many features and a decent ride quality. It’s even available in a diesel engine variant that is powered by a 1.05-litre turbocharged mill. This engine is adequately powerful and even gives a high fuel mileage.

The Mahindra KUV100 is another affordable car that is available with a diesel engine option. The KUV100 draws power from a three-cylinder 1.2-litre diesel engine that offers a good mix of mileage and power. The KUV100, which rivals the petrol-only Maruti Ignis, also comes with butch looks, spacious interior and enough features..

In its second generation now, the Ford Figo, which has been a Maruti Swift and Hyundai Grand i10 rival, comes with a stonker of a 1.5-litre diesel engine that offers brilliant performance and a high mileage. The Figo also looks quite good and offers a sporty suspension setup. We even like the way it look after receiving a facelift earlier this year.

The Tata Bolt comes with a Fiat-sourced 1.3-litre diesel engine that is a smooth performer and even highly fuel-efficient. It’s also a pretty spacious hatchback that offers a good ride quality. The Bolt rivals the Swift and the Grand i10 and can be viewed as the modern interpretation of the original Indica.

The Hyundai Grand i10, or the second-gen i10, comes with a 1.2-litre turbocharged diesel engine that offers decent performance numbers along with a high mileagr. The Grand i10, which stays on sale even after the arrival of the third-gen model, offers a spacious cabin, great features and is pretty easy to maintain.

Check out old Hyundai Grand i10 cars in Chandigarh

The Hyundai Xcent is the compact sedan derivative of the Grand i10 and offers similar qualities. It even has the same 1.2-litre diesel engine that offers a good mix of performance and mileage. It is quite easy to find well-maintained second-hand examples of the Xcent as the car has been quite popular ever since its introduction in 2013.

Check all the pre-owned Hyundai Xcent cars in Hyderabad

The Mahindra Thar is the most affordable diesel-powered lifestyle SUV on sale in the market today. It’s also among the most iconic cars on sale in India. It offers butch looks and a highly capable 4×4 system. Its 2.2-litre common-rail diesel engine offers a punchy performance and is even sufficiently refined.

The Tata Tigor is to Tiago what the Dzire is to Swift and Xcent is to the Grand i10. The cheapest sub-4-metre sedan in the country offers an attractive exterior design and benefits from all the qualities of the Tiago along with offering a bigger boot. It shares the 1.05-litre diesel engine with the Tiago and offers a good mix of mileage and performance.

Maruti Swift is the highest-selling car in the country. While its petrol variant is more popular than the diesel one, even the oil-burner-equipped model is a good option for those looking for a sporty yet frugal small car. Powering the diesel version of the Swift is the tried and tested Fiat-sourced 1.3-litre diesel engine that is even found under the hood of many other cars on sale in the country. The Swift is also quite affordable, both in new and used car markets, and is fairly easy to maintain.

The Maruti Ciaz is your best bet if you are looking for an affordable yet comfortable mid-size sedan that runs on diesel. Powering the Ciaz is the company’s all-new 1.5-litre diesel engine that offers a good mix of high performance and great mileage. The Ciaz also offers a very spacious cabin, some segment-best features and elegant looks. It’s also pretty easy to maintain and comes with the added benefit of Maruti’s robust after-sales network.

Are you planning to buy a second-hand diesel car? CARS24 offers a wide range of used cars from which you can buy the model of your choice. You can even use our used car value calculator to get to know the right resale value of any car on sale in the country. Finally, you can even get in touch with us to sell your used car and obtain the best price for it.