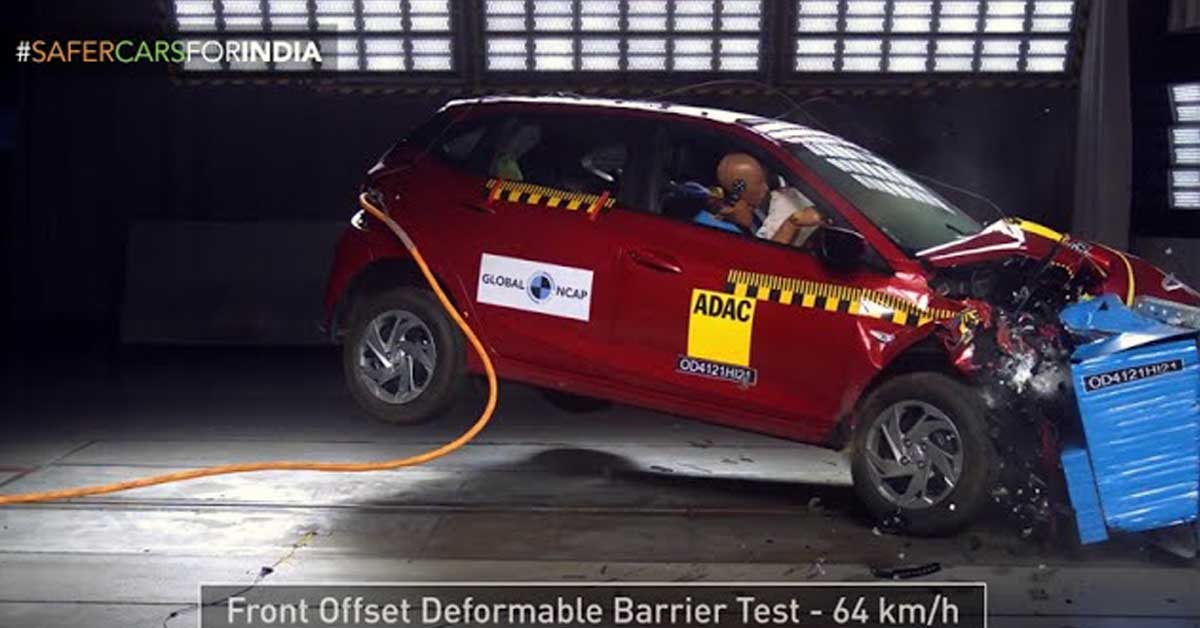 The third-gen Hyundai i20 is one of the handful of cars that were recently crash tested by the Global NCAP. The organization has also tested the latest Hyundai Creta in the same batch and like its sibling, the i20 has managed to get a 3-star safety rating for adult as well child occupants.

Hyundai i20 Safety Rating by GNCAP

As is the case with all tests conducted so far, the Hyundai i20 used for this test was the entry-level variant that comes with dual front airbags, ABS and front seatbelt reminder as standard safety features. The latest-gen i20 was launched in India in November 2020 and locks horns with a handful of models like the Maruti Baleno, Honda Jazz, Toyota Glanza and Tata Altroz.

The latest generation Hyundai i20 has bagged 8.84 points out of 17 for adult occupants, thereby resulting into a 3-star score. The report from NCAP rates the bodyshell as well as the footwell of the vehicle have been rated as unstable and incapable of withstanding further loads. The i20 couldn’t score well owing to weak protection offered to the driver’s chest and marginal protection to driver’s as well as passenger’s knees. That said, the head and neck protection for the front occupants was ranged from adequate to good.

Coming to child occupant, the Hyundai i20 scored 36.89 out of 49 points. The base model i20 features ISOFIX child mounts as standard. Global NCAP reports that the car managed to prevent excessive forward movement but it lost out on some points due to poor protection to child’s neck. Also, it only gets a lap belt for the middle passenger on the rear seat, which has further cost a few points.

The earlier generation of India-spec Hyundai i20 was tested by Global NCAP in 2018. Even the last-gen i20 had received a 3-star rating from Global NCAP but its overall score in adult protection was significantly more. Unlike the current i20’s score of 8.84 points, the earlier model scored 10.15 points for adult occupant protection. However, the latest version has scored much better in child occupant protection as the earlier model could score just a 2-star safety rating with 18.16 points.

While additional features such as Electronic Stability Control (ESC), Vehicle Stability Management (VSM), ISOFIX child seat mounts and rear disc brakes are available SX Executive trim onwards. It is important to mention here that the Government of India is taking steps to make changes to the minimum safety requirements in all cars sold in the country. A highlight of the update will be making six airbags mandatory on all cars sold in the country from October 2022. In fact, the Government even plans to make ESC and Autonomous Emergency Braking mandatory in the coming years. Meanwhile, even the Global NCAP is all set to tighten its safety standards. From July this year, it will update its testing procedure to factor in ESC and even start conducting side-impact and pedestrian protection tests.

Later this year, Hyundai will roll out a range of new models, including an updated Creta that will come with ADAS and additional safety features other than a handful of cosmetic updates. Other than this, the carmaker also plans to launch an updated Alcazar, Venue facelift and the latest-generation Tucson.