The Hyundai Verna and the Honda City have been battling it in the upper-C-segment of the Indian car market. Our Hyundai Verna vs Honda City comparison should help you decide between these two capable sedans

Hyundai Motor India Ltd has been enjoying a dedicated set of followers in the upper-C-segment, where it has positioned the latest-generation Verna against hot-selling cars like the Honda City and the Maruti Ciaz. The Verna is a lot more powerful and feature-rich than the Ciaz, which means it’s the City that becomes a more direct rival. The City was given a facelift last year and manages to look young and modern. But the Verna is an all-new model that has most of the bases covered with a powerful engine, feature-laden engine, and the Fluidic Sculpture 2.0 design language. So, is it a better car than the Honda City? Our Hyundai Verna vs Honda City comparison here should help you decide that.

The Hyundai Verna is significantly cheaper than the Honda City. The base petrol model is almost a lakh rupees cheaper while the base diesel model is almost Rs 1.5 lakh cheaper. Hyundai has managed to price the car so competitively by offering a 1.4-liter engine in the first two models of the Petrol Verna. The diesel model of the Verna, however, in spite of being more powerful, costs substantially lesser. Hence, the Verna is the clear winner of our first round of Hyundai Verna vs Honda City comparison.

The new Verna offers three engine options – 1.4 Petrol, 1.6 Petrol, and 1.6 Diesel. In comparison, the City offers a 1.5-liter Petrol and a 1.5-litre Diesel engine. Both the 1.6-litre engines of the Verna are more powerful than their counterparts on the Honda City. While the Verna 1.6 petrol offers 121 BHP and 154 Nm, the City petrol offers only 117 BHP and 130 Nm. Even though the 1.4-litre petrol engine of the Verna offers a lower torque output of 98.6 BHP, its peak torque of 132 Nm is higher than what the City’s engine offers. The difference in performance of the diesel engines is even larger. The Verna’s excellent diesel engine offers 126 BHP and 265 Nm. The City, in comparison, offers only 99 BHP and 200 Nm. Hence, the Verna has a clear advantage here. Hence, in this part of Honda City vs Verna comparison, it’s the latter that clearly outshines
. 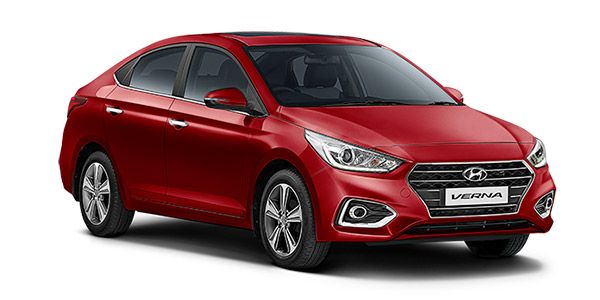 Hence, seating three passengers in the rear seat of the Verna is a better option than having three passengers on the rear seat of the City. The Verna also offers 45 mm higher headroom than the City, which should help the taller passengers feel less claustrophobic. Hence, even in this area, it’s the Verna that just manages to win our Hyundai Verna vs Honda City comparison. It’s only when you compare Honda City and Verna in terms of overall length that the Japanese sedan emerges as the winner.

The Honda City is the clear winner of this part of our Hyundai Verna vs Honda City comparison. In spite of having a more powerful engine than the City, the Verna petrol manages to offer a higher mileage. It’s only when you compare the automatic variants that the City ends up having a lead over the Verna petrol. Moreover, the City’s Diesel variant offers a higher mileage than the diesel variant of the Verna. Hence, this part of our Honda City and Verna comparison has been won by the City. The Hyundai Verna is designed as per the company’s widely publicized Fluidic Sculpture 2.0 design language. As a result, it ends up looking a lot more premium and mature than before. The new Verna looks flamboyant, much of which is due to the bold creases and the taut surfaces. Up front, it comes with the trademark cascading effect grille, a pair of sleek headlamps, and a sporty bumper. The side profile gets a design that’s highly reminiscent of that of the earlier model. At the rear, the tail lamps look really sleek and the bumper looks sufficient sporty to complement the front-end.

Hence, it’s clear that the Verna is the winner of our Hyundai Verna vs Honda City comparison.