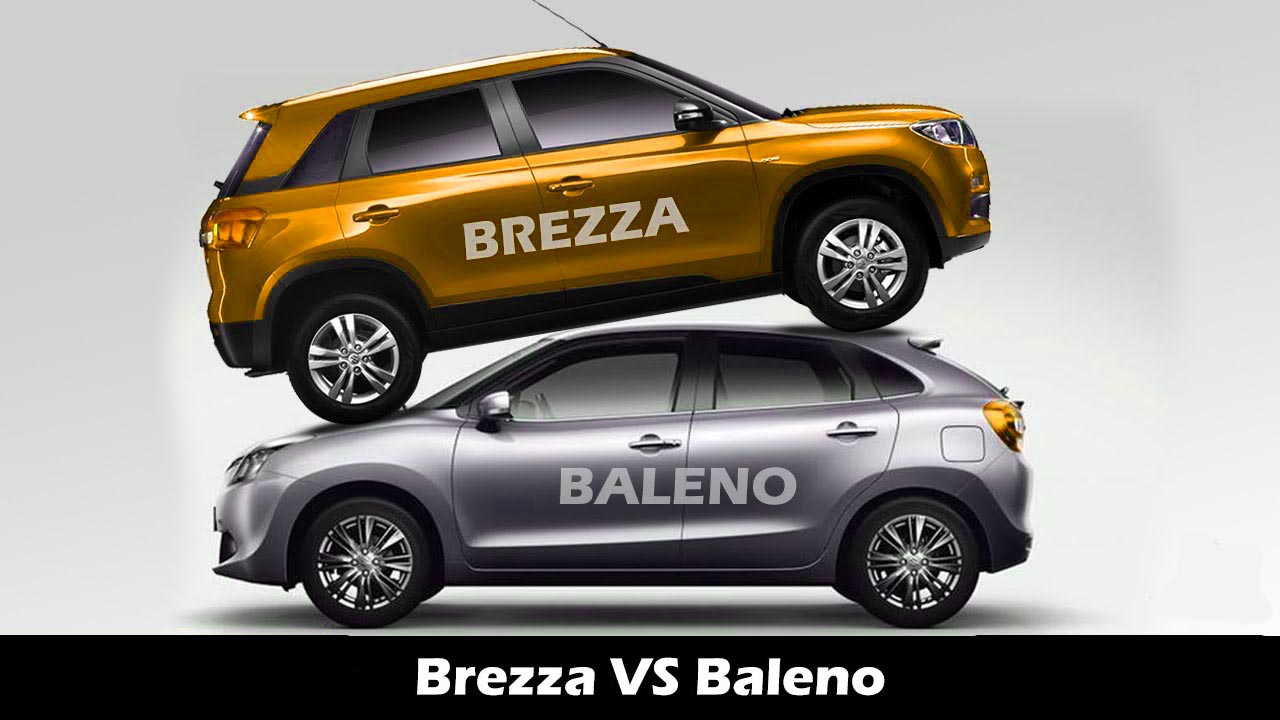 Our Maruti Vitara Brezza vs Baleno comparison will take you through a detailed review of the prices, specifications, interior features, styling and other details of the best selling Maruti Suzuki models

The Maruti Vitara Brezza and the Maruti Baleno have been great cars in their respective segments. Both the models enjoy a huge fan following and selling in thousands every month. While the Maruti Vitara Brezza rivals the Ford EcoSport, Tata Nexon, and Mahindra TUV300, the Maruti Baleno competes with the Honda Jazz and the Hyundai Elite i20. In spite of strong competition, both the models end up being many times more popular than their immediate rivals. However, both of them are priced close to each other, which means anyone in that budget can pick between either of the two models. Today, we compare the two models in our Maruti Vitara Brezza vs Baleno comparison to tell you which is better car between the two.

In a car market like that of India, pricing is always one of the most significant factors for the success of any model. We have seen some excellent cars ending up being huge flops due to their excessive pricing. Maruti Suzuki though knows how to price every vehicle exceptionally well. Both the Brezza and the Baleno are priced very competitively and hence, attract many buyers in their respective segment.

Please note here that while the Maruti Baleno is available in both petrol and diesel variants, the Brezza is on sale with a diesel engine only. Also, while the diesel-powered Maruti Vitara Brezza has an optional AMT automatic transmission, the Baleno D is on sale with a five-speed manual transmission only. If you compare the prices, you’ll see that the Vitara Brezza range starts at Rs 7.58 lakh. On the other hand, the diesel variant of the Maruti Baleno has a base price of Rs 6.51 lakh. The hatchback has a considerable price advantage over its compact SUV sibling. But let’s not forget that the Brezza offers so much more than the Baleno. By paying Rs 1 lakh extra, you get a bolder looking car that has a more powerful engine and a higher street presence. You also have an option of an AMT automatic transmission, while the Baleno is on sale with a 5-speed manual transmission for its diesel engine option.

Brezza vs Baleno Comparison of Dimensions

Before we go ahead with this round of our Brezza vs Baleno comparison, let us once again state that both these models are very different and hence, are bound to be too different from each other. However, with both the models being sub-4-metre models, they have an equal overall length of 3,995 mm. The Baleno has a higher wheelbase than the Brezza, which leads to slightly better legroom for the rear passengers. It also has a slightly higher boot space (339-litres vs 328-litres). But the Brezza has a much higher width. Being an SUV, it also has much more height.

Like we said, both the models are very different from each other. While the Baleno is a B2-segment hatchback, the Brezza is an entry-level compact SUV. But those looking for a new car in this price segment can undoubtedly compare the Brezza with the Baleno by their dimensions. It gets clear that the Baleno has a bigger boot space and marginally higher legroom while the Brezza, being an SUV, is much taller. It’s also much wider. Moreover, it has a higher ground clearance too, which is something that comes in handy in the harsh road conditions our cities are famous four.

Both these Maruti Suzuki models are as different from each other as chalk and cheese. They might be priced somewhat close to each other and even have the same length, but there’s nothing that is in parallel between the designs of these two models. The Baleno is a modern premium hatchback with a somewhat unconventional design. It has swept back headlamps, blacked-out A-pillars and B-pillars and some flowing lines in the side profile. The rear-end is very sporty due to a high boot lip and sporty tail lamps. In comparison, the Brezza looks rugged and bold. This is due to its higher ground clearance and wider body, which gives it a  higher street presence. Unlike the Baleno, it doesn’t get any flowing lines and is all about clean surfaces with straight creases. Being an SUV, it is also more practical. It has a lower boot lip, which aids practicality. It also has a bigger Daylight Opening (DLO) due to the bigger greenhouse.

Between the two, it’s quite difficult to select a winner. We say this as both offer almost equal number of features. Both the cars get SmartPlay infotainment system that supports Apple CarPlay and Android Auto. They also get keyless entry, push-button engine start/stop, automatic climate control, electric adjustment for ORVMs, electric folding for ORVMs, automatic headlamps, reverse parking sensors with camera, and multi-function steering wheel.

All trim levels of both the models offer ABS with EBD and dual airbags across all the trims. The only features that help the Baleno stand out include a floating roof design and Bi-xenon headlamps. On the other hand, the Maruti Vitara Brezza gets various dual-tone colour shades, five preset mood lighting for the instrument cluster, MirrorLink, cruise control, and rain sensing wipers. With this, the compact SUV is the winner of this part of our Brezza vs Baleno comparison.

If you ask which has better mileage, Brezza or Baleno? We’ll point you towards the premium hatchback. With an ARAI-rated fuel efficiency of 27.39 kmpl, it’s clearly more fuel efficient than the 24.29 kmpl of the Vitara Brezza. But, in spite of the fact that both the cars us a 1.3-litre diesel engine, the Brezza is more powerful. This is due to the variable geometry for its turbocharger. The more advanced turbo unit pushes the peak power and torque output to 90 PS and 200 Nm. This is 15 pS and 10 Nm more than what the Baleno offers. Another advantage that the Brezza has is that it offers a 5-speed manual as well as a 5-speed AMT automatic transmission. In comparison, the Baleno is available with a 5-speed manual transmission only.

Like we have been saying, both these models are as different from each other as chalk and cheese. While one is a premium hatchback, the other is a compact SUV. Still, we have compared them for you, and our verdict here should let you judge which is the better car, Brezza or Baleno –

Price- In terms of pricing alone, the Baleno is the clear winner of our Brezza vs Baleno comparison. It’s more than a lakh rupees cheaper, which means all those on a budget should pick up the B2-segment hatchback.

Specifications-While both the models are powered by a 1.3-litre diesel engine; it’s Brezza that is more powerful. It offers 15 PS more power and 10 Nm more torque.

Mileage – If you want to decide a winner of our Maruti Baleno vs Vitara Brezza comparison on the basis of mileage only, it’s the smaller car that is more fuel efficient. It offers an ARAI-tested mileage of 27.39 kmpl, which is much more than 24.29 kmpl provided by its SUV sibling.

Design- Design is a matter of personal choice, but between these two, we would prefer the Brezza for its macho looks and a higher street presence.

Features- The two cars are well matched in this category. But the compact SUV emerges as the winner as it has rain sensing wipers, cruise control, and various dual-tone body colours.

While we have tried to tell you the advantages and disadvantages of both Maruti Baleno and Maruti Vitara Brezza, there is no clear winner of this Brezza vs Baleno comparison. We feel you should pick up either of these as per your exact requirements.